All kinds of moments with Chad Reed at TwoTwo Motorsports.

With the news last week that Chad Reed is closing the doors on his TwoTwo Motorsports team, we look back through the archives and relive some of the biggest moments that Reedy’s outfit graced us with. 1. Reed launches TwoTwo Motorsports:
In November 2010 Chad Reed confirmed the rumours that he was moving away from factory deals and launching his own team, TwoTwo Motorsports. Armed with a Honda CRF450 and with support from Pro Circuit, Reedy took a big old gamble by breaking new ground and investing his own hard-earned money into the team, but stated he was ready to do things on his own terms instead of jumping when the team chiefs told him to jump.

2. First Australian appearance:
Anticipation for 2012 was high when Reed announced he’d race three of the four rounds of the new Australian Supercross Championship for the first time as part of TwoTwo Motorsports (his previous appearance came at Newcastle in 2010 prior to the team’s official launch). The first round he raced at Phillip Island had fans clamouring for a look at their hero that they hadn’t seen race on home soil in a couple of years. With the round also piggy-backing off the MotoGP, national and international media attention was high and Reed didn’t disappoint as he ripped the field apart to win the event.

3. The ‘Chadapault’:
When you put the words ‘Chad Reed’ and ‘motocross’ together, the first thing that springs to many minds is the Australian’s ridiculous crash at Millville in 2011 while dominating the point-standings. On the opening lap of the race Reedy swept past Ryan Villopoto and into the lead, but a few seconds later he had one of the most spectacular, gnarly get-offs in motocross history when he got flicked over the bars as he left the lip of a tabletop. Reedy rag-dolled through the air and landed off the track, but, to the amazement of everyone he remounted and finished the race. That incident and his determination to shrug off the crash and carry on won him legions of fans and tonnes of industry respect. 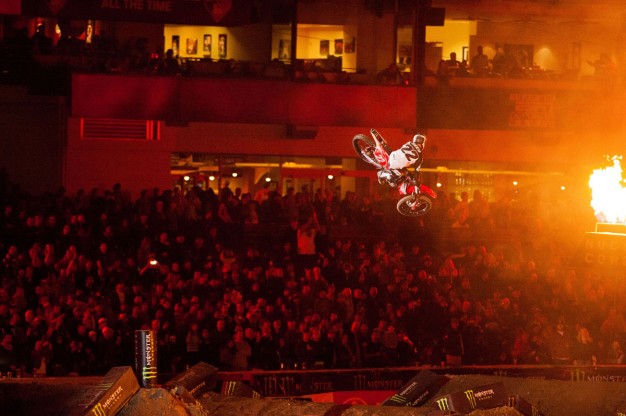 4. 2011 Las Vegas:
In what’s been dubbed one of the best races in one of the greatest seasons of all time, Reed came within four points of claiming the 2011 championship in a drama-filled finale at Las Vegas. Reedy started in main event in fifth, but Stewart crashed in the whoops and took Windham down with him, putting Villopoto first and Reed second. The 22 passed Villopoto with nine laps to go, then had to hold off a fast-finishing Ryan Dungey for the win. He mightn’t have won the championship battle in his debut year with the new team, but Reed’s performance all season was epitomised for 20 laps around a challenging, one-lined track.

5. That Anaheim 2 win:
The crowd at Anaheim 2 in 2014 witnessed one of the greatest, most emotional wins in Reed’s career. After a mediocre start, Reed sliced through the pack and passed the best riders in the sport to take an incredible come-from-behind win that still gives us goosebumps when we watch it. As soon as he crossed the line Reed jumped the fences and celebrated with the spectators before crumpling into tears as the emotions of the win overwhelmed him. “I had to work way too hard for this one,” he said from the podium. “I’ve had 41 of these [wins] before tonight and they came a hell of a lot easier than this one”.

6. Seatbouncing to surgery at Dallas:
While embroiled in an epic battle with multi-time champion Ryan Villopoto at Dallas, Texas, in 2012, Reed seatbounced a small triple in a rhythm section but went over the bars in a brutal crash that ended up ruling him out of the season while he was sitting second in the points to his arch-rival RV2. The crash gave him a shopping-list of injuries including two broken rips, a broken T6, a torn ACL and a fractured tibia and fibula.

7. Switching it up:
After three years repping Honda and having being outspoken about his inability to gel with the then newly-redesigned CRF450R, Reed’s TwoTwo Motorsports switched things up in a big way for 2014 when he announced he was returning to the green camp with Kawasaki, with Discount Tire confirming its involvement as the naming rights sponsor of the team. Reed had tested a range of bikes before settling on the Kawasaki – including almost inking a deal with KTM from what we understand – giving his pit presence a whole new look and feel for the final two years of his team’s existence. 8. Going down in San Diego:
In one of the most heartbreaking crashes of his career, Reedy’s 2014 campaign came to a bone-shuddering halt at San Diego when he ran into the back of Ken Roczen’s KTM in the whoops on the final lap. Reed was ripping along in fourth and pushing hard for a podium position when it all turned pear-shaped and he shoulder-charged the up-ramp of a jump straight out of the whoops. The brutal impact broke his scapula, collarbone and T1 and put yet another promising supercross campaign up in smoke.

9. TwoTwo plus 33:
Ever since Reed founded TwoTwo Motorsports, speculation was rife about who his first-ever teammate might be. While most people expected Reed to bring on a 250 rider (Dean Wilson’s name was bandied around on more than a few occasions), the Australian raised many eyebrows by signing Josh Grant to race under his awning for 2015. After his best-ever motocross championship last year, plus the two guys having similar-aged groms, it seemed like a perfect fit. Unfortunately Grant’s results this year have been inconsistent at best and he hasn’t lived up to the expectations we had set on him.

10. Dominating the Dome:
Reedy’s dominant wire-to-wire win at the Georgia Dome in Atlanta this year was momentous for a whole raft of reasons. It signalled that despite being the oldest dog in the pack, he’s still more than able to control and win races. It was his 11th year where he’s recorded at least one win, and incidentally, it had been 11 years since he’d won inside the Dome. He became the fifth winner from eight races in the championship (up to that point it was still exciting before Ryan Dungey began strolling away with it), and as it would pan out, it was the final first-place trophy that Reed would gather for TwoTwo Motorsports. But what a way to do it!