After a frantic finish to the regular working week yesterday amidst speculation that Chad Reed will be closing TwoTwo Motorsports, the Australian icon has undergone shoulder surgery that will likely force him out of the remainder of the nationals.

As pretty much everybody knows by now, Transworld MX dropped the bombshell that TwoTwo has closed its doors, which then went viral with some media outlets even going as far to claim it as ‘official’ with no indicated sources of their own whatsoever. Needless to say, the Reeds weren’t happy with the way it went down.

Now, I have no problem with breaking news – that’s what journalism is all about and motocross needs more of it – but there is a tactful way of going about it and ensuring that the full picture is painted to the best of your ability/research. Considering the latter news we found out of Reed undergoing surgery, we obviously won’t see TwoTwo as it currently is for the rest of the year.

Where that leaves Josh Grant, who himself has been sidelined through injury in recent races, I’m not sure, but I’m certain a solution that’s suitable for everybody will be put in place before decisions are made final for next year and beyond. It’s paramount you take all angles into account before attempting to break news and the delivery is an important part of that. 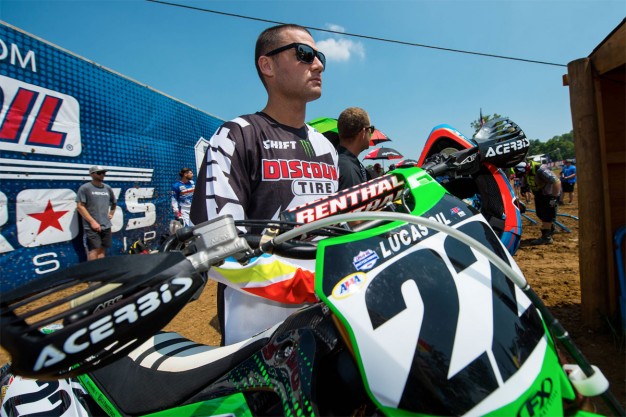 It does appear very likely that Reed will race elsewhere in 2016 rather than continue on with TwoTwo Motorsports, but nothing is concrete or fully decided from what I understand. Options are still open as we speak. And interestingly, Transworld has since revised their story to remove the reference of Reed soon showing up on a factory Yamaha (instead they just say ‘bike’).

In fact, Reed went as far to state Transworld’s story was 95 percent speculation in response to me on Twitter yesterday, which doesn’t mean it’s completely wrong, but that they don’t have a full gauge on the situation. And as for those publications that jumped on the bandwagon soon after to post the info as news themselves, it’s the usual click-bait we’ve come to expect.

Whatever happens, as a fan of Reed I admire their efforts with TwoTwo Motorsports since its introduction in 2011. The effort and organisation that goes into running such a team cannot be underestimated, especially while still managing to win races and challenge for titles in the late stages of his career. If we can see him on track for at least one more year, in a structure that will enable him to gain the best results he can, then awesome!

And as a sidenote for those wondering, Chad did confirm yesterday that his shoulder operation should heal relatively quickly and we can still expect to see him take on James Stewart in Sydney at the AUS-X Open come November. It looks as though both him and Stewart will use it as part of their prep for 2016.

Locally, news broke this week that Dylan Long will replace Jake Moss at NPS Monster Energy Kawasaki for the final five rounds of the MX Nationals, after Jake suffered a badly broken leg while training for a return at Raymond Terrace. We wish Jake a quick recovery and look forward to seeing Longy equipped with a factory KX450F in the upcoming races.

And word is that Dan Reardon, the CDR Yamaha rider currently in the US preparing for the final rounds of Australian motocross, is looking to return there fulltime in 2016 if an opportunity arises. We’ll have more on that later, but it is looking like a very real possibility if he gets his way.

That’s it from me for today, at this point I will hand it over to Simon Makker for a bit of an off-road twist this week…

This week it was a pretty interesting exercise to break down the top five riders who could potentially challenge the red-hot Toby Price as the Yamaha Australian Off-Road Championship heads into its second half.

On paper the five blokes, Josh Green, Beau Ralston, Chris Hollis and Toby’s teammates Tye Simmonds and Daniel Sanders all have what it takes to stick it to Mr Price. But man, whatever Toby touches turns to gold at the moment and really, it’s going to take a supreme effort from any of these guys.

The unknown equation in this situation is just how Toby’s foot is feeling after he copped a big stick through the boot just before Finke. He hasn’t been on the bike at all since Queen’s Birthday Weekend and the change from 150-plus km/h sand-whooped straights to tight enduro racing could be jarring.

Price’s Yamaha-riding rivals have had the benefit of training hard for the tricky bush tests that’ll face them this weekend for about a month and will well-tuned to the technical nature of enduro racing. However, if Toby can still convincingly win two days of Finke with a foot that resembled a purple party balloon, I have all confidence that he’ll be able to put the blinkers on and pin his ears back.

The advantage of enduro is you’re not at the mercy of other racers around you – it’s just you against the clock and you can’t blame anyone else but yourself if the results don’t go your way.

Aratula is the first and only full enduro stop of the 2015 championship. Riders can expect both days to be tough going too: Aratula sits on the doorstep of the Great Dividing Range and the terrain in the area can be very steep and rocky.

Recent regular showers in South-East Queensland should’ve kept the dust to a mimimum and conditions should be as close to prime as you can expect. It’s shaping up to be a fascinating two rounds of racing and could go a long way to defining who will be the class – and possibly Outright – champions in this year’s series.