Popular Victorian MX1 rookie to stand in for Jake Moss. 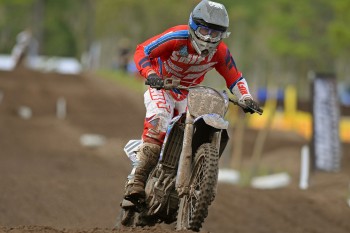 Emerging MX1 talent Dylan Long has been named the surprise replacement for Jake Moss in the NPS Monster Energy Kawasaki team for the final five rounds of the 2015 MX Nationals.

Kiwi John Phillips has initially filled in for Moss, who was scheduled to return at Raymond Terrace next month before sustaining another broken leg while training in Queensland.

Kawasaki Motors Australia’s factory outfit, managed by multiple-time national champion Troy Carroll, has now given 20-year-old Long the opportunity to show his strengths as part of a full factory operation.

“It’s awesome – this is what we all strive for as privateers,” Long said. “All the hard work has paid off. I have ridden the KX450F before in my own time and I think they are great bikes, so I am ecstatic to be racing one now and for the Kawasaki factory team. I couldn’t ask for much more than that.

“I am usually pretty good with adapting to bikes and a new team environment, so I am sure I will hit the ground running and make the most of this opportunity. Coming into the series I wanted to finish top 10 every race, which I have.

“Since round four at Murray Bridge I’ve realised my potential and wanted to get to top five, but due to bad luck in last few round I’ve dropped back. I know where I can be and I think racing on the factory KX450F will definitely help me get within the top five this year.”

Carroll commented: “I am personally very excited for Dylan to come on board after watching his performance and speed throughout the season. Dylan has an impressive racing history on smaller capacity bikes and he is harnessing that experience in his first year of competing in the MX1 class.

“He is seventh overall on the leaderboard after the fifth round, which is a phenomenal accomplishment. Having the support and infrastructure of a factory team is paramount and I know that we can unlock Dylan’s potential on a Kawasaki KX450F.”

“I can’t thank Adam Jafer enough for releasing Dylan from his contractual obligations with Tattoo Racing and allowing him to race for the NPS Monster Energy Kawasaki Racing Team.”

Long has turned heads constantly in 2015 to date on board a privateer Tattoo Racing-supported Yamaha, currently seventh in the stacked MX1 national standings. He will debut with Kawasaki at round six on 5 July.