As the Yamaha Australian Off Road Championship enters its second half at Aratula, QLD, this weekend, the question is who can challenge and potentially stop the runaway freight train that is Toby Price? MotoOnline.com.au casts the spotlight on five guys who have the mettle and speed to challenge the dominant KTM rider in this year’s AORC.

5. Tye Simmonds:
For his rookie year in the bush, Toby Price’s teammate Tye Simmonds has certainly turned a lot of heads and proved he’s a bloke not to be trifled with. Born and bred in outback NSW, Simmo has shown that he’s more than comfortable dodging trees and chasing the clock rather than banging bars on the motocross track. Currently sitting fifth Outright despite a mechanical DNF at the third round at Hedley, Simmonds has steadily improved with three podiums at the last three rounds. Following his awesome second place to Price at Finke, Simmonds will be brimming with confidence this weekend.

4. Beau Ralston:
Now in his second year off-road after leaving the motocross tracks, Active8 Yamaha Yamalube team rider Beau Ralston has found a heap of form and pace this year. Currently leading the E2 class, the Newcastle resident opened his 2015 wallet with a roar when he finished second Outright to Toby Price at the Kilkivan opening Sprint round. He followed that up with two third overalls and currently finds himself holding down fourth Outright. After a four-week break while some of the other racers punished their minds and bodies at Finke, expect Ralston to carry a spring in his step at Aratula.

3. Chris Hollis:
While the E2 and Outright titles might now be out of reach of CDR Yamaha’s Chris Hollis, he will be more than eager to spoil as many parties as he can for the rest of the season. Hollis’ campaign came to a grinding halt at Hedley when he came off at the start of the race and hurt his elbow. The DNF, followed by a DNS the next day realistically took him out of the running for the 2015 championships, but that hasn’t stopped him knocking on the doors of the podium (he finished second Outright at round two at Kilkivan). The two Enduro rounds this weekend – incidentally the only Enduro formats this year – should suit Hollis to the ground 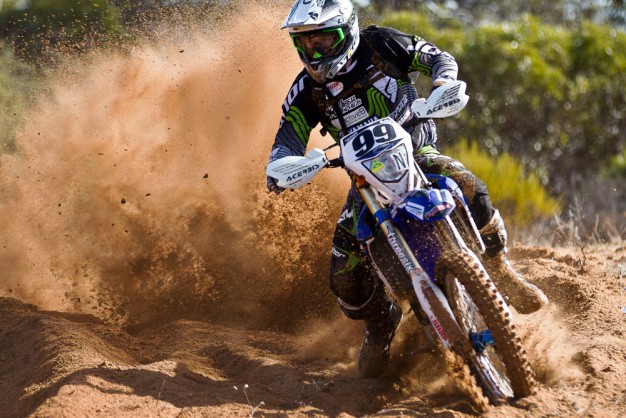 2. Daniel Sanders:
The youngest member of the KTM Off-Road Racing Team, Daniel Sanders has been a big revelation after stepping out of the 19 and Under class to race with the big boys in 2015. Chucky hooked straight into the E3 class with his teammate Price and has turned the senior ranks on its head with his second overall in the class and his current third in the Outright standings. While he might be seen as an apprentice to Price, sooner or later this apprentice is going to step out of the shadows and prove he’s a legitimate title and Outright threat. If we were to put money on it, we reckon that’s going to happen sooner rather than later.

1. Josh Green:
Active8 Yamaha Yamalube’s Josh Green holds the honour of being the only racer to have beaten Toby Price this year. Green’s solid win in the dust at the Hedley Cross Country race round and his consistency in all types of race formats and conditions sees him sitting in second Outright and comfortably leading the competitive E1 class. The New South Welshman is desperate to keep the pressure on the dominant Price and should Pricey falter at any stage, Green will be right there to capitalise. Pinching one or two round wins at Aratula this weekend will give him a boost of confidence for the four remaining rounds.