Cairns talent's road to the MXGP podium against the world's best.

In the early hours of Monday morning (Sunday in Europe), North Queensland’s Todd Waters stunned the motorcycling world by mastering a brutal, mud-logged Maggiora circuit and sliding his way to the first podium result of his MXGP World Championship career.

In his first real season in the MX1 class (the 24-year-old only raced five rounds last year before breaking a number of bones in a training crash) Waters has consistently been improved and now finds himself in a solid eighth position in the points chase.

His latest result, a 4-4 for third overall is by far his best career result and will give he and his long-time Australian mechanic Ryan Deckert a huge amount of confidence entering the second half of the championship.

“This is a huge result for me and the team,” the Red Bull IceOne Husqvarna rider reflected afterward. “We worked really hard during the two weeks prior to this race and it paid off. I love racing in the mud, the conditions certainly didn’t faze me. To finish third overall is an amazing feeling.

“I felt good all the way through the first moto. I moved up from seventh or eighth to fourth, which was good. The team told me a podium result was on about three quarters of the way though the second race, so I went for it. I gave it everything and to get third is amazing.” 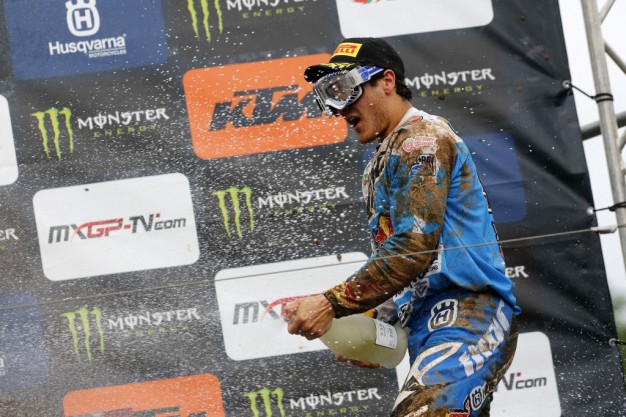 It’s been a rollercoaster ride to the top for Waters, who grew up in the hills behind Cairns, riding on weekends and claiming six junior titles throughout his junior career.

In the Under 19 ranks Waters continued to shine and was offered a guest MX2 ride at Toowoomba in 2007. Despite being overwhelmed at lining up between his childhood heroes Mitch Hoad and Ryan Marmont, Waters won the opening race, then came from dead last to sixth in the second moto to claim second overall.

“I couldn’t believe it. It was weird, because I passed Ryan Marmont thinking ‘I thought you were fast – what’s happening here?’” Waters laughed.

After a lackluster 2008 he signed with the factory Honda team to race MX1 for 2009, but after winning the opening two rounds, extensively injured his foot and spend most of the season on the couch. It proved to be the start of a long struggle with injuries: a broken collarbone in 2010, then a mangled wrist in 2011 saw him spend almost more time recovering that actually racing.

In 2012 he turned his fortunes around when he signed with Motul Pirelli Suzuki, putting the yellow machine on nine of the 10 podiums, including three round wins at Murray Bridge, Horsham and Coolum as he finished the season in second to Josh Coppins.

Waters’ impressive efforts saw him gain a spot on the 2012 Motocross of Nations team, and around the brutal Lommel circuit he roared to an eighth in one of his two motos, passing American Blake Baggett in the process. From there, the overseas bug bit Waters hard.

“Ever since Lommel I was hooked,” he said. “It’s like being 16 again – all the tracks are new, the environment is totally different, you’re racing these guys for the first time and everyone is so fast.” 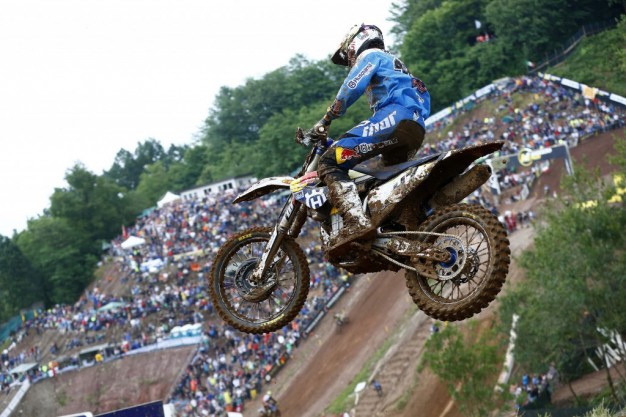 Waters’ returned to the Motorex KTM team in 2013 and dominated the first three rounds of the MX Nationals before taking a huge hit to the head during a round of the Sunny State series in Queensland.

The whack saw him barely pass a fitness test to race Broadford and Matt Moss capitalised to then begin a string of victories on his way to the 2013 title while Waters, who broke also broke his collarbone through the season, again finished runner-up. And he again appeared at the MXoN, finishing fourth overall alongside Dean Ferris and Brett Metcalfe.

Waters was then snapped up by Husqvarna’s official MXGP team through contacts within KTM to race alongside Tyla Rattray in 2014. Before leaving for his new base near Lommel, Belgium, Waters was focused on adapting to the challenge that lay ahead.

“The one thing I’m going to work on is believing that I belong there, as that’s been the hardest thing for me,” he said prior to departure. “If I train in Europe, get to know the tracks and put in a big effort, I could be competitive. I think Europe toughens you up. You learn to live on the bone of your arse, structure yourself and be focused on that one goal of winning no matter what.

“I want to make the most of this opportunity, because I don’t want to look back on it one day and wonder ‘what if’. Opportunities like this only come along once or twice in your life, so I don’t want to waste it.”

If Maggiora – and his 2015 campaign in general for that matter – is anything to go by, Waters certainly isn’t wasting his opportunities and he’s proved he’s more than capable of pushing for podiums and even race wins.

With his 2015 teammate Max Nagl still leading the MX1 championship, the second half of his 2015 campaign is going to be very interesting indeed.