Plots we didn't see coming during the current season.

Eli Tomac’s sudden demise after dominating the opening rounds of the 2015 Lucas Oil Pro Motocross championship is just the tip of the iceberg of craziness we’ve witnessed so far this year. We’re only six months into 2015, but the wild plot twists and things that haven’t gone to plan verge on defying belief. With that in mind, we bring you the 10 biggest blind-siders of the year so far. 1. Tomac topples
It seems ludicrous to think the fastest guy in American motocross, Honda’s Eli Tomac won’t win an outdoor title this year. After five dominant wins from five races so far this year, the 2015 450 title was Tomac’s to lose, and if he was to rub his domination in the faces of his competitors at any round, it was expected to be at his home round at Colorado. Racing, though, is a cold-hearted bitch with no favourites. Early in the second race at Thunder Valley, CO, Tomac had a huge high-side that wrecked both his shoulders, including a 100 percent tear to one of his rotator cuffs. Tomac is now out for the rest of the year, which, after such an incredible start to the outdoors, just doesn’t seem right.

2. AUS-X Open blows up
As the curtain fell on the 2014 Australian Supercross Championship at Brisbane, there was a cautious optimism that maybe, just maybe, the sport was turning a corner. Enter AME Management, who have shown just what is possible when you’re proactive, have a thick contacts book and a vision for what Australian supercross should be like. Their announcement of the indoor AUS-X Open event in Sydney in November was big enough, but when they revealed that both Chad Reed and James Stewart were locked in to race, ticket sales went spastic and quickly sold out. The response was so amazing that AME has just announced the cornerstone event will now be a two-night affair with racing on both Saturday and Sunday nights. Whoever said supercross was dead in Australia was very, very wrong.

3. Millsaps gets cut
Normally when a rider parts ways with a team, the rumour mill is in overdrive in the weeks weeks leading up to it. It’s a small industry and word soon gets around. That’s what was so crazy about Monster Energy Kawasaki dropping their hired gun Davi Millsaps – there was absolutely no warning at all. It happened so quickly the entire industry felt like they’d been caught with their pants down. Even now details of the split are scant because it’s expected to end up in court, but all we’ve heard is that team personnel found ‘something’ in Millsaps locker. Whatever it was must’ve been serious enough for them to drop him like a hot potato, although Millsaps has repeatedly claimed his innocence. The details will come out sooner or later.

4. Mossy’s shocker season
How the mighty have fallen. At the end of 2014 Matt Moss was an unstoppable freight-train who could win a race by so much as thinking about it. The Motul Suzuki racer had won four national 450 titles in two years (two MX Nationals and two supercross) and established himself as the country’s fastest domestic racer. Then things turned to south when he was injured in the pre-season, much of which he spent in the US. From there he was behind the eight-ball as he only got back on a bike days before the opening round of the MX Nationals. At the first round at Horsham he had a get-off and tweaked his neck, then two weeks later at Appin he went down in the first turn and missed the next two rounds with an assortment of injuries. His return at Coolum on Sunday was well below his best with a 17-DNF result, which indicated he wasn’t quite ready to come back yet.

5. Sheehan lands the triple flip
In the hands of Western Australia’s Josh Sheehan, FMX hit a whole new level of stupidity a month ago when the defending Red Bull X-Fighters Champion successfully rode out of the world’s first triple backflip at Travis Pastrana’s moto playground. The set-up was an epic contraption that punted Sheeny into the stratosphere before he plummeted back to earth after completing three consecutive backflips. How you even train or get your head into the mind frame needed for this sort of ridiculousness is outside the realm of most mortals. But then, Sheehan certainly isn’t your average bloke. As an indication of the impact the stunt made on the action sports world, Nitro Circus’s official video of the triple has been viewed more than 10.8 million times in four weeks. 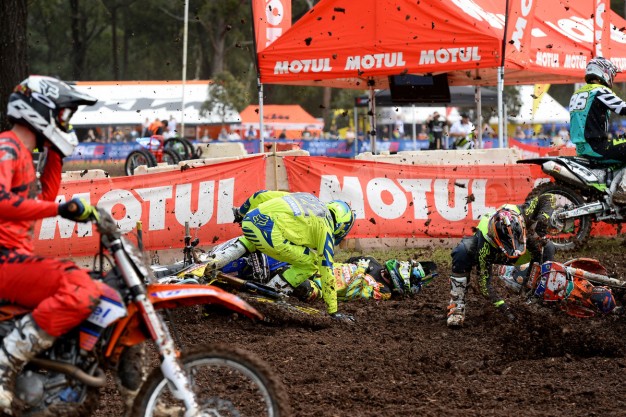 6. MXGP fizzer
2015 was supposed to be all about the clash of the two titans in motocross; eight-time world champion Antonio Carioli versus one of the US’s greatest racers ever, Ryan Villopoto. The ultimate proof of who was indeed the best racer on the planet. The world watched. The world waited… and waited… and then Ryan Villopoto had one of the most unusual loop-out crashes we’ve seen in years at Trentino, buggered his back and hasn’t been seen since. With Villopoto nursing his wounds the gloss has certainly been taken off the 2015 MXGP, even though we pay close attention to Aussie duo Todd Waters and Dean Ferris. Did you know that eight rounds of the championship have passed by? Or that Max Nagl still leads the MX1 class?

7. Reedy’s MX deal-breaker?
Last week a press release from camera company 360fly was distributed announcing they’d signed TwoTwo Motorsports’ Chad Reed as one of their riders in a deal reportedly worth about half a million dollars. However, when Reedy showed up at Thunder Valley with the revolutionary new cam on his helmet, Reedy was forced to remove the conflicting device from his helmet if he wanted to race because of GoPro being an official sponsor of the MX Sports-promoted series. While he complied, he’s since voiced his anger at not being able to promote a personal sponsor and is threatening to boycott the series altogether if he’s not allowed to run the 360fly. Funnily enough, the amount of exposure 360fly has received as a result is huge compared to if they’d turned a blind eye to the sponsorship in the first place. Still, if Reed does flip the bird at the Pro Motocross championship it could cause all sorts of snowballs for riders and sponsors in the future.

8. Stewart gets banned
While the news of James Stewart’s anti-doping scandal for prescription drugs broke last year, it wasn’t conclusive that the US superstar’s would miss any races until days before the opening round of the AMA Supercross Championship at Anaheim. Even Stewy himself was training as if he’d be lining up and racing. When the World Anti-Doping Agency and FIM announced that he was banned from racing until August 2015, effectively destroying any chances of him appearing at any races this year, the reaction from the industry was swift and fierce as people rallied behind him. An appeal from Stewart to overturn the ruling in May was shut down, meaning he has all the time in the world to train for the AUS-X Open in Sydney in November.

9. Price rocks Dakar
Much has already been said and written about Toby Price’s astounding podium result in his first-ever attempt at the world’s toughest off-road race, but that doesn’t make his efforts any less spectacular. Even in our wildest dreams we didn’t think Pricey could equal Australia’s best-ever result in the gruelling event, so for him to stand on the podium with the world’s greatest, most experienced racers after two weeks of blood, sweat and tears is nothing short of historic. Price has already opted to sit out this year’s ISDE so he can focus on mounting an even stronger campaign for next year’s event. Could he go all the way in 2016? Do we dare to dream?

10. Roczen’s SX campaign
When RCH Suzuki’s new golden child Ken Roczen dominated the opening round of the 2015 Monster Energy AMA Supercross Championship at Anaheim (as he also did in 2014), then went 2-1 at Phoenix and Anaheim 2, the German became the red-hot favourite to stroll away with the title in a jam-packed class and prove #whosnext in Ryan Villopoto’s absence. However, at the fourth round at Oakland, Roczen’s campaign began unravelling like a cheap sock when he cased a triple so badly our screens shook. After that, Roczen’s form was a shadow of what it once was, until, after a horrific round at Atlanta where he suffered two monumental get-offs he pulled out of the series to address his war wounds and focus on the Pro Motocross championship.