Race Feed will compliment our Livestream posts in 2015, for those who can’t follow it throughout the day. All you have to do is refresh this page as the MX1, MX2 and MXD motos pass by. This feature depends on the availability of internet coverage at the circuit. 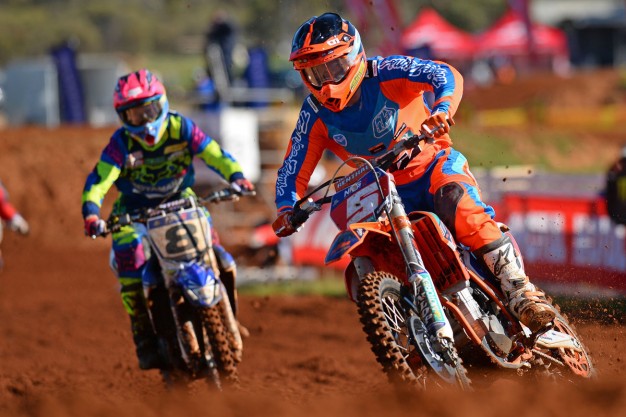 Motul MX2 qualifying:
Queenslander Nathan Crawford set the pace in opening MX2 qualifying to kick-off here at Coolum, his 1m41.555s lap around a second and a half faster than surprise second place finisher Riley Graham. The top 10 was tightly packed, with Jay Wilson third, Jack Simpson improving for fourth and Taka Katsuya fifth. Pre-race favourite Caleb Ward was sixth quickest this morning, trailed by Dylan Wills, Kyle Webster, reigning champion Luke Clout and Dean Porter completing the top 10. Notable names outside the top 10 include Jed Beaton in 11th as he still recovers from his broken collarbone, Hamish Harwood in 13th, Luke Arbon in 14th, Wade Hunter down the order in 16th and Geran Stapleton 20th.

Monster Energy MX1 qualifying:
Lawson Bopping has claimed the GoPro Super Pole at Coolum’s fifth round of the series with a 1m41.515s ahead of red plate holder Kirk Gibbs, Adam Monea, the returning Ben Townley in a one-off appearance (although his time wasn’t officially registered) and Jesse Dobson, who crashed during his lap. Outside of Super Pole, positions six through 10 were filled by Luke Styke, Dylan Long, Kade Mosig, Kale Makeham and Dan Reardon. Major names top finish the session outside of the top 10 were Sunshine Coast’s Ford Dale in 11th, Matt Moss 12th upon return from injury, Cody Cooper 14th and John Phillips in his last appearance for Kawasaki in 16th.

Pirelli MXD qualifying:
Championship leader Wilson Todd has topped the MXD qualifying session during this morning’s qualifying, his 1m48.798s a full second faster than Connor Tierney, with local Jesse Madden third in what is his home round of the season. Completing the top five was Jayden Rykers and Toby Stevens, while Zak Small, Ryan Eden, Wayde Carter, Kaleb Barham and Bailey Coxon were the top 10 placers.

Motul MX2 moto one:
The opening MX2 moto saw a mixture of talent at the front in the early laps including Dylan Wills, Wade Hunter and Riley Graham, but it was eventually Caleb Ward who made his way to the front and sprinted to the opening 30-minute moto victory of the round. Ward won ahead of Luke Clout, who’s still battling a thumb injury, and Taka Katsuya rounding out the podium placings. Hunter fended off a charging Jed Beaton for fourth, as directly behind them Nathan Crawford worked his way from the rear of the field to cross the line in sixth. Also inside the top 10 for the race was Jay Wilson, Luke Arbon, Geran Stapleton and Jack Simpson. Wills meanwhile was forced out of contention with what appeared to be a damaged gear lever while running inside the top three in the middle stages.

Monster Energy MX1 moto one:
Moto one of the premier class belonged to former world champion Ben Townley, the New Zealander racing to the victory in what was his first appearance of the season. Townley overcame longtime leader Lawson Bopping in the final third of the moto, despite a mid-moto stall that almost cost him a shot at the win. At the end of the moto it was Townley winning comfortably ahead of Bopping, while Luke Styke battled to third. Three of the series’ best went down in the first turn including Kirk Gibbs, Dan Reardon and Kade Mosig, forcing the trio to charge back through the field into the final stages. Gibbs was able to finish fourth, while Jesse Dobson was fifth after he fell out of a podium position in the closing laps. Next in sixth was Adam Monea, from Mosig, Reardon, Ford Dale and Dylan Long, who had run inside the top three for much of the moto before mistakes dropped him down the order. Upon return to racing Matt Moss was 17th due to a mistake that saw him take a long period to refire his Suzuki, and it was also a difficult moto for teammate Kale Makeham in 19th.

Pirelli MXD moto one:
Husqvarna’s Connor Tierney claimed a tight opening MXD moto victory this afternoon at Coolum, marginally fending off a fast-finishing Jayden Rykers in a photo finish that had the crowd on their feet. Rykers caught and moved past Tierney on the penultimate lap before Tierney was able to counter, crossing the finish just 0.035s ahead at the moto’s end. Behind them was Jesse Madden and Zak Small inside the top five, while completing the top 10 was Bailey Coxon, Jordan Hill, Wayde Carter, Trent Wheatley and Jonte Reynders.

Motul MX2 moto two:
Nathan Crawford raced to a thrilling second moto victory in the MX2 ranks, battling with Jay Wilson for much of the moto before taking charge in the final laps for the win. Behind him was moto one winner Caleb Ward, who snuck by Wilson for position in the final stages. Fourth in moto two after a fine ride was WA’s Dean Porter, Luke Arbon fifth, and then positions six through 10 were filled by Jack Simpson, Taka Katsuya, Geran Stapleton, Jed Beaton and Kyle Webster. Notable names lower down the order included Wade Hunter in 11th and Luke Clout a lowly 20th. Overall the round win went to Ward over Crawford and Wilson, while Clout maintains the red plate by five points over Katsuya and Wilson, who are now tied for second.

Monster Energy MX1 moto two:
The second moto belonged to Kirk Gibbs in a stunning performance, taking charge early and quickly establishing himself at the front of the field. Behind Gibbs it was Lawson Bopping who rode to an eventual second place, which secured him the overall for the round – his first since Hervey Bay in 2012. It was looking as though Townley would claim the round win as he sat inside a podium placing for much of the moto, but a late mistake dropped him down the order and denied him the overall for this weekend. Third in the moto was Kade Mosig in a strong effort, chased home by Adam Monea, Townley, Jesse Dobson, Luke Styke, Daniel Reardon, Cody Cooper and Dylan Long. Overall it was Bopping the victor, Gibbs extended his championship advantage in second, and completing the overall podium was Townley.

Pirelli MXD moto two:
The second and final MXD moto of the round went to red plate holder Wilson Todd by a comfortable margin, while the runner-up placing of Connor Tierney in moto two secured him a second overall round win in a row. The top three for the moto was Todd, Tierney and Jayden Rykers, with Bailey Coxon and Jesse Madden completing the top five. Also finishing inside the top 10 for the moto was Ryan Edan, Toby Stevens, Hamish McGrath, Kaleb Barham and Jaiden Corrigan. Tierney got the nod overall by two points from Wilson, with Rykers rounding out the podium. The championship now sees Wilson with a six-point lead over Tierney entering the break.