After putting the MX2 class to the sword at the end of the 2014 MX Nationals, many people expected North Queensland’s Caleb Ward to be a huge title threat this year. However, his season hasn’t gone to plan and the championship is probably already out of reach for him following a knee injury, but that didn’t stop him from crushing the competition with a 1-1 round result at Murray Bridge on the weekend. MotoOnline.com.au caught up with the 18-year-old KTM-backed privateer to find out about his sudden show of form. 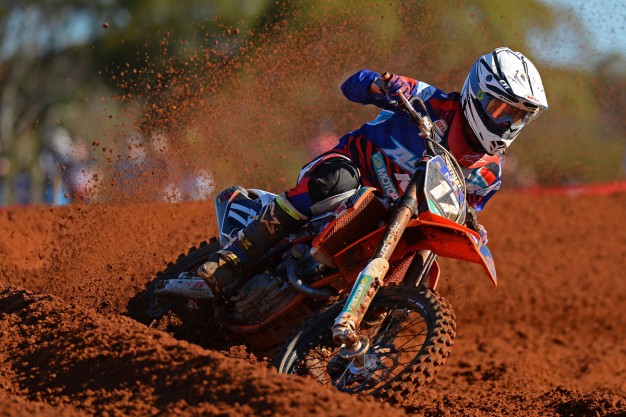 Your 1-1 result on Sunday took many people by surprise. Is it enough to keep your campaign alive?

Nah, I think the title has pretty much gone now. The top three to five guys are going to need to have a lot of bad luck to get me back into contention. Even if I won every race from here on out it’s a long shot. It’s been a frustrating year for me. I struggled with starts at Horsham, but after that I focused all my energies on that and was ready to turn it around at Appin. I was second out of the first turn there, then did my knee on the first lap and that was just devastating. Sitting on the couch not training, knowing I’d blown the title for the year was pretty gay. I missed Broadford altogether and Murray Bridge was my first race back.

Take us through your day.

Qualifying went alright considering my tyre went flat on the way to the line and our spare wheel had a hardpack front tyre on it, which isn’t ideal for a soft track like Murray Bridge. We still qualified sixth though, and that set me up for a decent gate pick. In previous years I’ve always started well from the middle of the gate and find it sets me up nicely for the corner, so I went straight there. In the first moto I almost got the holeshot but ran a bit wide and Geran Stapleton came through. I followed him for a few laps then passed him through the whoops, then I just rode my own race and did my own thing. I wasn’t sure how my fitness would be, so I just tried to ride smart and not take many risks.

Then in the second moto you had a great battle with Luke Arbon which essentially settled who stood on top of the box afterward. How was it out there?

I didn’t get a great start in that race, really; I think I came around in about ninth place. I tried to pick off as many riders as I could in that opening lap and got myself up to third, then Luke and I got into a great pace that saw us pass Riley Graham and go 1-2 on the track. In the middle of the race I faded a tiny bit and made a couple of mistakes, so I caught my breath and chilled out, then put in a big effort on the last three laps. I passed him on the second-to-last lap and held on until the finish.

What was it about Murray Bridge that made you turn it on and show us your real speed?

It’s probably just a more open, flowing track with more lines. Getting good starts helped, for sure, as there’s so much depth in the class and it’s hard to pass guys from the back. But Murray Bridge is the kind of track that suits me more than the tracks we’ve had so far this year. 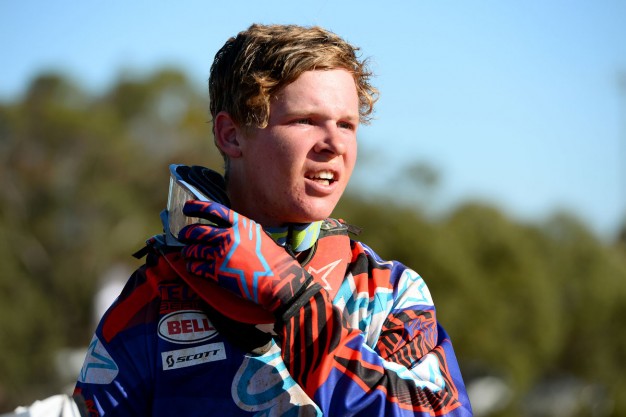 How did your knee hold up out there?

It was a bit sore in the first moto, but in the second moto I wasn’t even thinking about it and it didn’t affect me. The injury is actually a torn ACL and a damaged MCL, but I don’t like taking painkillers or anything like that – I avoid the meds if I can. After this next round at Coolum we’ve got a bit of a break so I’ll get into some rehab and get it stronger and closer to 100 percent again.

Last year you were unstoppable on the two-stroke. How has it been trying to get used to a four-stroke again?

My bike this year is awesome and I actually found the transition quite easy. After a couple of weeks of riding I’d adapted well and was really happy with the bike’s engine and suspension set-ups. My speed at Horsham wasn’t a problem – the biggest thing that let me down was my starts – and I came from dead last to fifth in one of the races. I did a lot of off-season work on hard pack tracks because I knew they were my weakness and I needed to focus on those conditions for a good shot at the championship. Getting hurt at Appin was a massive bummer.

You mentioned Coolum before. Last year you were super-quick there and now it’s a home round for you as well, right?

Yeah, I’m renting on the Sunny Coast at the moment, so I’ll be able to sleep in my own bed the night before. I usually do well at Coolum and I really enjoy riding the sand, so I want to go out there, stay calm and smooth and get my flow on. My aim now is to just win as many races as I can. I won three rounds last year and always want to do better, so I want to prove I could’ve been a championship threat if I hadn’t had such a bad start to the season.

Wicked. Thanks for the chat! See you at Coolum.

Thanks mate, appreciate it a lot.