Don’t be surprised, if, come Sunday afternoon, we see a couple of new faces on the box at Murray Bridge.

The South Australian round harkens the first round of the championship that isn’t a hardpack track. It’s probably a stretch to say the Bridge is a sand track, but it’s certainly a lot softer than anything else we’ve seen so far this year.

Murray Bridge is one of the riders’ favourites of the series. It’s fast and flowing, provides an abundance of passing opportunities that promote fast, close racing, and there’s always a tonne of different lines to choose from. 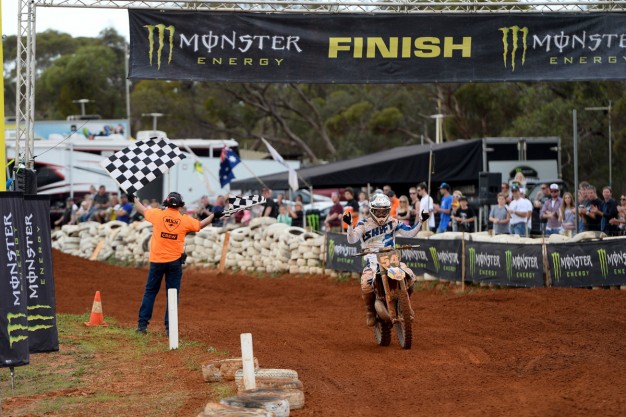 In 2014, the venue really kickstarted Luke Arbon’s season and put him in championship contention. Murray Bridge is his home-town race (as it is Kirk Gibbs) and he always seems to shine there.

To be blunt, though, Arbon needs to shine this weekend. His pace and form so far have been a shadow of what he showed us last year.

aybe the two-stroke Husky he rode really was that good. Despite the average results he’s been garnering this year, Luke seems to still be enjoying himself out there and hasn’t let the results affect his outlook too much. If he doesn’t give his season a kick in the guts this weekend, though, that situation could change.

Over on the over side of the Pacific, the AMA Motocross Championship starts this weekend at Hangtown.

RCH Suzuki’s Ken Roczen – who sat out the second half of the supercross season with injury – is carrying the red plate into 2015, but man, he’s going to have his hands full with the form that Ryan Dungey is carrying at the moment.

In fact, it wouldn’t surprise me if we see red KTM number five plates both in Australia and the US after this weekend. Chad Reed will also line up for the Great Outdoors, but it’s no secret that Reedy’s a much stronger indoor rider than he is in the nationals.

As for the 250 Class, Adam Cianciarulo makes his welcome return from injury for the championship and he’ll be more than eager to live up to the considerable hype that’s placed on his shoulders.

It’s going to be tough in such a competitive class, especially with defending champion Jeremy Martin, Cooper Webb and Marvin Musquin all on fire lining up alongside him. It’s certainly shaping up to be an enthralling season!