Once the MX Nationals season is in full swing, usually bi-weekly during the first and second halves of the season, it becomes a habit of sorts to be at races one weekend, home the next.

So it feels a little strange typing this from our Sydney office this afternoon with consecutive weekends off. But never fear, once Murray Bridge is past next weekend and Coolum a fortnight afterwards, we will have the real mid-season layoff.

And there’s still plenty of racing on this weekend with both MXGP and World Enduro in Spain, plus the GNCC continuing with its first Dunlop Tomahawk event. Of course, the Aussie contingent will be competitive in each.

It’s particularly hard to believe AMA Supercross is already in the books for this year and, while it was a bit of a snoozer come the second half, it seemed to fly by and we’re already onto the outdoors at Hangtown next weekend. Will we see Chad Reed line up in Pro Motocross? That’s hard to say without any direct information right now. It’s been suggested for a while now that he’d been planning a supercross-only deal for 2016, but that might have been fast-forwarded going by a post on his Instagram this week. Or, as plenty have before, we may be reading into it too much – let’s wait and see.

What we do know is that Chad will be joining his old rival James Stewart at Sydney’s AUS-X Open come November and we’re pumped for that one. And from what we can see and hear as well, so is everybody else in the sport!

AME Management has set a new benchmark so far in the promotion of Australian supercross, rolling out a heap of info, mainstream advertising campaigns and social media previews. If the organisers of the remaining rounds aren’t proactive themselves, they could get overshadowed altogether regardless of the big names AME has called in for Sydney.

What I’ve also noticed they’ve been mindful of is ensuring our local stars are features as well; it’s not entirely all about the Reed vs Stewart show. Sure, they’re the main attractions, but it’s been neat to see our domestic racers in their build-up also.

Speaking of the local action, MX Nationals organisers released a rivals-type press release this week detailing who the title threats regard as their main competition in 2015. With Matt Moss out of the hunt, it was an interesting topic.

The answers were reasonably predictable though; the MX1 guys class red plate holder Kirk Gibbs as the man to beat, while Gibbs notes teammate Luke Styke (currently second in the standings) as his chief opponent. And funnily enough in MX2, it’s the Yamaha trio of Luke Clout, Jed Beaton and Jay Wilson who all point toward eachother. 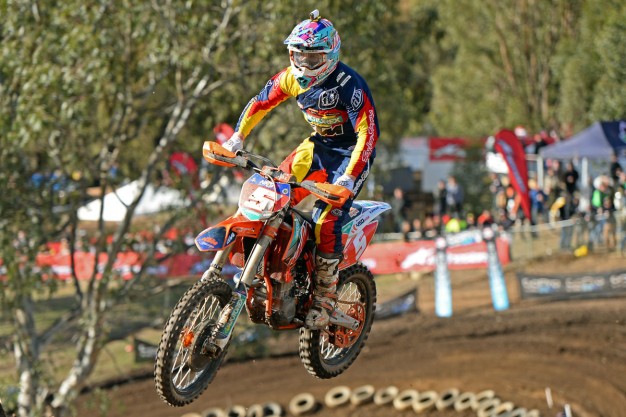 I spoke to Mossy briefly yesterday for a news update and he is still an uncertainty for South Australia despite being back on the bike. Depending how he feels over the next part of a week, he will decide if he’s fit enough for a return.

Another uncertainty in MX1 is Daniel McCoy, who had knee surgery post-Broadford to clean up some damage and, although he too is back on the bike already, it’s not confirmed whether or not he will be on track next weekend.

There are a number of niggling injuries doing the rounds at the moment – some we are aware of and some we aren’t – so for that select few, the mid-season break can’t come soon enough. And to add to that, this extra weekend off this week is vital for them.