KTM Motocross Racing Team new 2015 signing Luke Styke has been a picture of consistency in his return to the MX Nationals this time as an MX1 rider, scoring podiums at the opening two rounds before breaking through to win Broadford with a 1-3 finish during the motos. MotoOnline.com.au spoke to the 2013 MX2 champion about his success in the category upon return home from Europe. 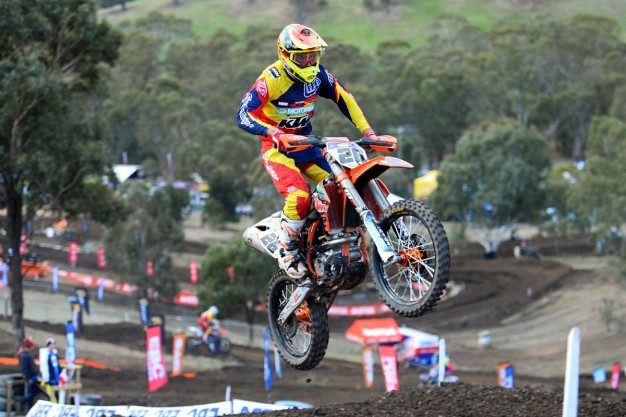 Broadford overall winner, you must be pretty happy right about now and the moto one win as well.

Yeah for sure, I had to get the monkey off my back and I felt like I was overdue for the win. In the first moto I rode a bit tight early on, but the two Yamaha boys made a big mistake, I capitalised on it and rode my own race. Monea seemed like he was giving me heat all weekend in both motos, but I kept a cool head and tried not to over-ride the track, which was easy to do.

In the second moto I just wanted to get myself in a good position with a top three start and chip away at that one. I started off a little bit tight again, then Monea was giving me some heat again and I wasn’t sure if it was for the overall or not, but I was just like ‘no-one’s passing me here’ and it was a good weekend – I can’t thank the team enough.

Me and Gibbs are on the podium every time and we’re putting in solid results, so it’s showing and the hard work’s paying off. I’m looking forward to some sand rounds now and yeah, it’s going to be great.

What went through your mind when you saw the two CDR boys on the ground in that first moto?

I thought they were silly mate. It was on lap three, you know what I mean, when they both went down there was a long way, 30 minutes to go, and it’s not won in the first three laps. It’s up to them what they want to do, but I was just riding my own race and like I said, I capitalised on it and I’m sure they’re going to have words later. 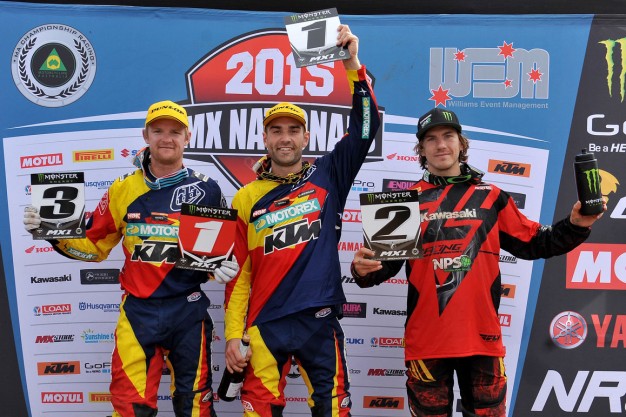 I’ll tell you what, you’ve been consistent so far though with three rounds back in Australia and in MX1, three times on the podium. Is that part of the game plan or just a result of the hard work?

I think it’s just through the hard work we put in over the off-season and pre-season. I just felt like the first three tracks weren’t going to suit me, so obviously to get a win today is a bonus. I look forward to the sand rounds coming up, the next two rounds we’ll get some more solid points on the board and keep building from where we are.

Yeah, for sure. The team’s like a family to me, they came in with their arms open and the results are showing. We’re in a happy place, everybody’s working hard and gelling, so we just have to keep moving forward.

No worries, well done on the result. KTM’s now 1-2 in the championship, very impressive.