Race Feed will compliment our Livestream posts in 2015, for those who can’t follow it throughout the day. All you have to do is refresh this page as the MX1, MX2 and MXD motos pass by. But remember, this feature depends on the availability of internet coverage at the circuit – something we haven’t always been able to rely on in recent seasons. If we disappear, that’s why! Either way, we’ll log our brief reports and upload as soon as we can. 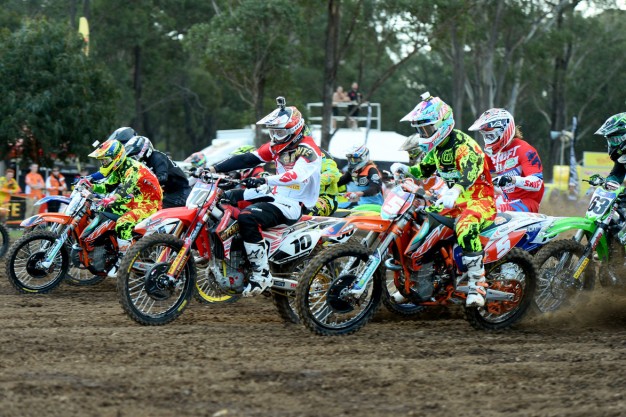 Motul MX2 qualifying:
Reigning champion Luke Clout has set the pace in MX2 qualifying at Broadford, which is so far relatively dry in between intermittent rain this morning. Clout was around two seconds faster than Nathan Crawford and Jed Beaton, with Hamish Harwood an improved fourth and Dylan Wills once again impressive in fifth. The top 10 was completed by Taka Katsuya, Wade Hunter, Jack Simpson, Jay Wilson and Alex Morris in his best showing of the season so far.

Pirelli MXD qualifying:
Upon return to racing from a fractured wrist that forced him out of the Appin round, GYTR Yamaha’s Mitch Evans rode to the fastest lap in Under 19s qualifying this morning, ahead of teammate and championship leader Wilson Todd. Horsham round winner Jordan Hill made it 1-2-3 for Yamaha riders in third, ahead of Kaleb Barham and Jayden Rykers inside the top five. Completing the top 10 was Jesse Madden in his first appearance with Raceline Pirelli Suzuki, Ryan Shadbolt, Jonte Reynders, Wayde Carter and Lachlan Davis.

Motul MX2 moto one:
Luke Clout controlled the opening moto and maintained his advantage for the victory, while Jay Wilson hung on for second after a last lap challenge from Jed Beaton. Beaton went to make a move with two turns to go, but got ejected over the handlebars of his Serco Yamaha before quickly remounting to salvage third. Fourth was Taka Katsuya ahead of Wade Hunter, who was inside the top three for much of the moto before dropping to fifth in the later stages. A late charge from Geran Stapleton saw him climb to sixth past Dylan Wills, with Hamish Harwood eighth, Jack Simpson ninth and Kyle Webster in 10th. The early lead belonged to Nathan Crawford, however he went down and eventually dropped out altogether with what was understood to be a tweaked shoulder. Fellow Husqvarna rider Luke Arbon was another to shine early, but a crash demoted him all the way back to 21st.

Monster Energy MX1 moto one:
KTM’s Luke Styke broke through for his first-ever MX1 win in a controversial first race, after CDR Yamaha teammates Dan Reardon and Kade Mosig crashed together while in positions one and two. Reardon led early before coming under pressure from Mosig, the pair’s lines soon coming together and ruling Reardon out of the moto with bike damage as a result. That left Styke to soldier on for victory over Adam Monea and the much-improved John Phillips, who fended off fellow Kiwi Cody Cooper and rookie Kale Makeham in a consistent effort. The top 10 was a mixed bag, featuring Jesse Dobson in sixth, Kirk Gibbs seventh after multiple heavy crashes, then Dylan Long, Cheyne Boyd and Daniel McCoy. Ford Dale was an uncustomary 11th from Mosig, who managed to salvage 12th, Lawson Bopping 13th and Aaron Tanti 14th after he was strong in the opening part of the moto.

Pirelli MXD moto one:
GYTR Yamaha rider Wilson Todd stretched his MXD advantage in the opening moto of the round, winning comfortably ahead of Jesse Madden in what was his first appearance on board the Raceline Pirelli Suzuki, while Jonte Reynders was on the final step of the opening race podium. Fourth in the moto was Kaleb Barham with Wayde Carter fifth, while Connor Tierney, Jayden Rykers, Jamie Harvey, Lachlan Davis and Bailey Coxon. The luckless Mitch Evans was a non-finisher in his return to racing, going down in the first corner and effectively out of the moto. Another non-finisher after a strong qualifying session was Jordan Hill, exiting proceedings after lap five.

Motul MX2 moto two:
The second MX2 moto was all Clout, picking up the round sweep for Serco Yamaha with double wins and this time ahead of teammate Beaton in his return to the podium overall. Behind the factory YZ250Fs in third was Katsuya, which secured him the final podium placing overall as well, while fourth was Geran Stapleton’s best result of the season, as was Dylan Leary’s in fifth. Riley Graham had another strong finish in sixth, while Hunter was seventh after being one of many who were penalised 10 seconds for allegedly going inside the circuit markers midway through the moto. Arbon finished eighth after he too copped a penalty, then Joel Whiteman and Hamish Harwood completing the top 10. Jay Wilson was penalised multiple times in the moto for the same reason as Hunter and Arbon, demoting him all the way down to 15th position in a huge hit to his championship hopes.

Monster Energy MX1 moto two:
Gibbs bounced back to win the second MX1 moto after an entertaining duel with Reardon. It was Gibbs who led early and then Reardon took charge, but by the end it was Gibbs who made his way to the front for the final moto win of the round. Reardon was second and the ever-consistent Styke third, which secured him his first round victory of the year and in MX1 ahead of Adam Monea, fourth in moto two, and Gibbs overall. In the moto finishing fifth was Dylan Long, while Cooper, Bopping, a frsutrated Mosig after another crash, Makeham and Boyd. Dobson was outside the top 10 this time in 11th, as was Phillips in 12th and Dale down in 16th. Daniel McCoy was a notable non-finisher at the end of the moto.

Pirelli MXD moto two:
The second and final MXD moto was topped by Carter in his first win of the season, trailed by Rykers and Todd, who charged through to third and secured the overall in the process. Behind Todd in fourth for the moto was Barham and Madden completing the top five, while Davis put in another good ride for sixth over Toby Stevens, Coxon, Cory Watts and Tierney. Overall for the round it was Todd the victor to extend his series lead, Carter second and Madden third. Evans sat out the second moto with an ankle injury, but is yet to undergo X-rays at this point.