Round three of the MX Nationals is here this weekend at the historic Broadford State Motorcycle Sport Complex in Victoria, which is an event that always throws a spanner in the works.

And for this year, today at least, falls on Anzac Day in what is a very special and commemorative day for our country. It’s nice to see the DPH Peter Stevens Yamaha team especially get right behind the Anzac spirit.

The pits, as usual on Saturdays, was a hive of activity as teams and the series organisers put their finishing touches on the preparation. And in terms of MX2 and MXD we have a pair of new red plate holders in Luke Clout (again) and Wilson Todd.

Rain was supposed to arrive reasonably early in the afternoon but it hadn’t come as we departed the venue when riders’ briefing was commencing at 4:00pm, though here in Melbourne it’s steadily raining at the moment.

The good news is tomorrow is forecast to be fine at this point and we’re expecting another strong turnout of supporters – both from a fan and industry standpoint – this weekend. And for those who can’t be there, we will be on deck covering all the action. 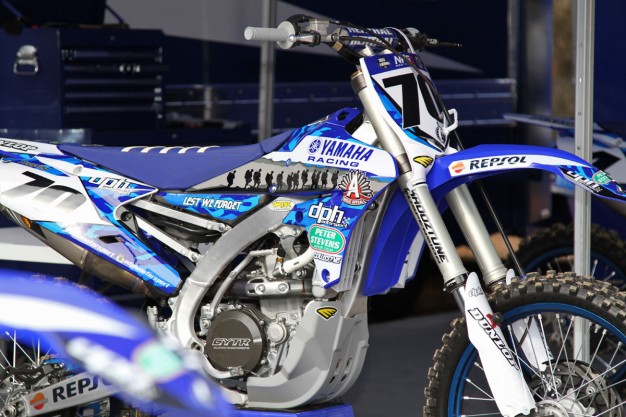 While Simon Makker further previews the weekend’s event below, I just wanted to comment on the AUSX-Open as part of the 2015 Australian Supercross Championship later this year.

Event promoter AME Management has done a fantastic job in securing both Chad Reed and James Stewart for the Sydney round, which will hopefully fill up at the arena’s capacity of around 21,000 people.

If they both are uninjured throughout the year and do show as we fully expect they will, it could be the greatest race ever witnessed in Australia – and that’s a huge achievement considering the history we have here.

And not to forget our Australian regulars as well, because as we know, indoor racing is as tight as it gets, which limits the anticipated advantages that riders like Reed and Stewart no doubt have on fullsize US tracks.

It will be a really positive marquee event for the sport locally, especially coupled with international FMX Best Trick competition – hopefully there is a neat prize so we see some of the sport’s best lay it all on the line for victory.

That’s enough from me here in Melbourne, I’ll pass this one over to our lead contributor Makker to wrap things up…

I don’t think there’s a track on the Australian motocross calendar that polarises riders as much as Broadford does. For a lot of riders, Broadford is a real motocross track.

It has decades of heritage attached to it (including hosting couple of rounds of the World Motocross Championship in the early 2000s) and it makes the most of the sprawling hillside with barely a flat section of track to be found.

At the same time, a lot of riders aren’t big fans of the circuit. If it’s not prepped right it becomes a veritable single track with one fast line 15cm wide and two metres of heavy, thick goop each side of it.

The lack of any challenging jumps has also been a bit of an subject of debate in recent years, and personally I think the latter point has some merit.

It wouldn’t take a lot of effort to construct a big step-up and/or step-down somewhere on the hillside (you’d think the final uphill and downhill next to the fence would be perfect as they’re fast, straight and will be in prime view of the spectators), or pull back and lip up some of the existing ‘obstacles’ already there.

In any event, this weekend’s round three promises to be a cracker, and it’s guaranteed that we’ll see different winners from last year when Matt Moss and Kayne Lamont walked away with the two class wins. This also marks the last chance for the hard-pack specialist riders to capitalise in the first half of the series as rounds four and five will feature the sand tracks of Murray Bridge and Coolum.

So who are my picks for the weekend? I think Gibbsy will do well on Sunday; he’s in the best form of his career at the moment and Broadford is a track that suits a smooth, consistent approach.

Towards the end of the day the track can also get brutally rough and I think Gibbs’s fitness will see him in good stead to stand on top of the box.

In MX2, there’s a bunch of riders who could happily take honours here, but I think this sort of track is one that’ll suit Jay Wilson.

The long uphill start will favour the two-strokes in the field, but ultimately, the rough hardpack circuit will suit the four-strokes to a tee, and with former GP racer Josh Coppins providing all the necessary advice to Jay, I expect him to have a great outing.