Six riders shaping up as the 2015 MX Nationals title challengers.

Two rounds deep and the MX Nationals are just about to fire up for the third installment of the 2015 series at Broadford, Victoria this weekend. As we quickly approach the midway point of the season and with reigning champion Matt Moss sidelined, the question continues to be asked ‘who has what it takes to take out the 2015 MX Nationals championship?’. We took a closer look at the Monster Energy MX1 Class to compare notes and see who really has what it takes to make the crown their own.

6. Dan Reardon:
What retirement? It was no surprise to fans at round one to see CDR Yamaha’s Daniel Reardon claim a top five in the first race of the day – the guy has always been fast. But in moto two at Appin, not only did Reardon launch off the start gate and take a commanding race lead, but the he managed to sustain his lead for a solid 30 minutes and claim his first race win of the year. Reardon has won championships, raced overseas and is still in his 20s, making him a true contender for a 2015 title. After all, prior to the season commencing, a selection of big industry names tipped Reardon to take out this year’s MX1 championship.

5. Lawson Bopping:
There is no doubt that over the years Lawson Bopping has shown Australia what he is capable of, however it seems as through he has never stuck around long enough to show anyone his full potential. This year the DPH Peter Stevens Yamaha-backed rider has launched himself back onto the MX Nationals scene. From earning a spot in GoPro Super Pole at round one, to finishing within the top five in three out of four races so far this season, there is no doubt about it, in 2015 Boppo is back.

4. Adam Monea:
The Victorian rider has not exactly kicked off his 2015 campaign as most would have expected. Finishing outside the top five in all four motos so far this season, Monea has some work to do over the next eight rounds of the MX Nationals if he wants to chase down a championship. What Monea does have however, is raw speed and determination to match. The Kawasaki factory rider claimed second in Super Pole at Appin, proving there is no doubt, that if he can get a start that he has what it takes to contest for this year’s championship. Currently sitting in fifth behind Bopping, Monea will need to take advantage of the Victorian rounds where he generally performs best in order to keep his hunt for the title alive. 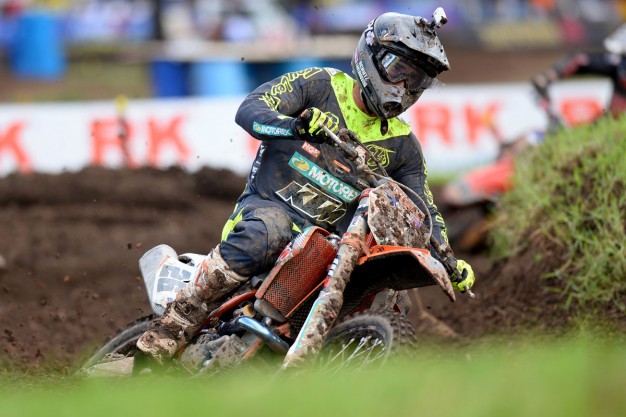 3. Luke Styke:
The last thing most people will remember of Luke Styke was when he completely annihilated the MX2 class in 2013. Next to no one could get near him and when he set off for Europe last year, most thought we wouldn’t see him back on Australian soil again. One year later, Styke is back at home and backed by factory KTM for the 2015 season. Having stepped up to the MX1 class this year, Styke had his work cut out for him in finding his feet in an absolutely stacked field. Styke seems to have slotted in perfectly though, finishing the first two rounds on the third step of the podium. He has exceeded expectations and is well on the way to either finishing 2015 on the podium or with an MX1 championship.

2. Kade Mosig:
CDR Yamaha made a smart investment when they snatched up Kade Mosig for the 2015 season. In 2014, Mosig’s results on paper are not even close to being reflective of what the Victorian racer is capable of (anyone remember the two mechanical DNFs he copped at the last round at Coolum last year?). This season, Mosig has solidified his spot as a deserving front-runner in the MX1 class. Currently sitting second in the championship standings, Mosig has proved that consistency is key, doing exactly what needs to be done in order to make steady progress at each round. After claiming his second-career overall win at Appin, our tip is that Mosig will be continuing with that winning momentum and could potentially be standing on the top step when the MX Nationals gets to Coolum in August.

1. Kirk Gibbs:
Despite finishing a close second to Matt Moss in 2014, Kirk Gibbs actually equaled Moss on overall round wins last year – both claiming three rounds each. At Raymond Terrace in 2014, Gibbs had the opportunity to potentially snatch the championship from Moss, but was unable to put together the results he needed when it counted. This year looks like it’s going to be a completely different story, Gibbs has already claimed one round overall at Horsham and a second overall at Appin, to provide him with a 14-point lead in the championship on Mosig. With one Super Pole win, a round win, two race wins, and the red plate under his belt, Gibbs has put himself in the perfect position to maintain his championship heading into Broadford this weekend.