MotoOnline.com.au caught up with KTM Off-Road Racing Team’s Toby Price today to find out how last weekend panned out for him at rounds three and four of the Australian Off-Road Championship (AORC) at Hedley in Victoria. 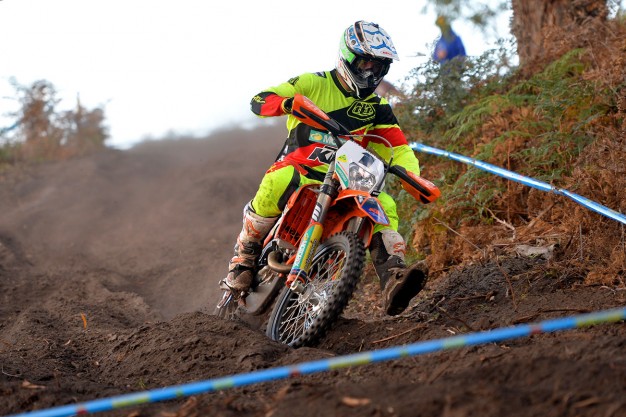 Toby thanks for your time. After round three on Saturday you were quite bummed out with what happened – I don’t think even anyone has ever see you look so dejected with your result. It must be pretty good to bounce back and take the overall and E3 wins on Sunday.

Yeah, round three was tough. Starting the Cross Country off at the first turn on my face was not the best idea, but unfortunately stuff like that happens. You are always going to have good and bad days and Saturday was definitely not my day. Trying to come through the pack I was just filled in with dust and came off another three times out on the track, which was not the best, as I burnt a lot of energy. They were really slow pace crashes -I couldn’t see where I was going and pretty much just fell over. Round three was rough, however to come from second last to fourth is not too bad, I was happy with that part of it. I lost a little bit of points. I managed to bounce back on Sunday really well and won five out of five sprint races which always the goal. Hopefully we can just keep moving forward from here.

After events such as Australian Enduro-X Nationals you were still feeling a little bit of the affects from Dakar, as it took a bit out of you. Is it still a problem at the moment or are you back to 100 percent now?

I’m definitely still catching up a little bit after Dakar. Every now and then you definitely feel the body shutting down a little bit, however I know my speed is there which is important for the Cross Country and of course the Sprints. But just trying to pick the bike up four times during a race does wear you out a bit. Yesterday I probably didn’t breathe and I didn’t drink my Camelback the way I used to… I just didn’t really think during the day. I did cramp up a little bit during the halfway mark in round three and then we got back on top of it again. Saturday was just really tough conditions, but the main thing is we scored some important championship points. If we can stay near that position or up on the podium for the remaining eight rounds we should not be too bad come the end of the season.

So in regards to training then, you openly admit there is room for improvement for the Cross Country side of things. What things can you work on?

Yeah, for sure there is room for improvement for the Cross Country stuff. Now that we have got one under our belt we know where we’re kind of at. In regards to fitness side of things, I just have to make sure I recover right. At late it’s been a little bit hard to try and recover the right way after race meetings because there has been a lot of media stuff following the Dakar result. But at the end of day you just have to squeeze in anything you can, that’s what we are doing, and we doing our best to do that. You also have to make sure you keep training and training right. We are doing what we can and we are feeling good. It’s just the way that Cross Country started off; it’s not the way to do it! If you are any further back towards the end of the field you are not going to put yourself in an area to put yourself near the front. I think we are still in good form and good shape, but we just have to get over those mistakes and not have those again. You just said you are still having to do media stuff in regards to your third place at Dakar. Are you still getting pulled here and there to do stuff?

Still a lot of people are wanting to know the story about the Dakar and coming from my injuries that I had in 2013, then just going to compete in Dakar in my first ever attempt and finishing third. People are just interested to know how it went down and what Dakar is all about. For me, it’s good, it’s good for building my profile to hopefully go back to Dakar next year bigger and stronger next year. All in all it’s good for me. You just have to do what can and when you can and I’m just having a great time when I’m doing it. I have a big grin from ear to ear every day!

So what’s next on the cards? Do you have any tests coming up before the next round?

We will do another test before the next round in South Australia. It will be more of a full-on sand track type thing. We will probably change a few things on the bike a little bit, not too much. We are starting to get to that time of year we have to start getting prepped and ready for the Finke Desert Race. We have some training and testing out there soon, so yeah it’s a full on schedule. It’s busy and flat out, but we love it and we are having a great time doing it.

One more thing, we all know you are a massive Valentino Rossi fan. How excited were you on Monday morning when you watched him win the MotoGP race in Argentina?

Yeah I have been a big Rossi fan for a fair while. I always try and keep up to date with all the MotoGP stuff. To see The Doctor come through and get another win is great! He’s 36 years old, nine times a world champion and still handing it to all these young guys out there. It’s really cool to see. I was definitely chanting at the TV, that’s for sure. It was also great to see my good old Aussie mate Jack Miller come home in 12th, which is his best result so far on a MotoGP bike. Give Jack a bit more time and he’ll get up there for sure. You can see he is definitely improving every time and moving forward. I’m sure it won’t be too long till we see Jack break into the top 10 and slowly move into the top five.