Hello and welcome to this week’s edition of Moto 360, presented by our friends at Alpinestars Australia, and coming to you about 24 hours later than usual today!

The reason for the delay is that, with a weekend off of the MX Nationals I took advantage of it to take Saturday off while racing my mountain bike up near Newcastle, but we’re back in time for all of today’s activity.

And there’s a lot of it this weekend, as Simon Makker details below. Combined with a mammoth schedule for road racing (we also operate CycleOnline.com.au), this weekend is probably the biggest of the year.

Right now, Sunday afternoon, we’re watching the Santa Clara supercross on ESPN 2 live, but with the absence of Davi Millsaps. Plenty of people have asked us what’s going on, but honestly, I have no clue. What I do know is that to get fired by a factory team takes a major wrong-doing, because although he’s not winning (aside from the Monster Cup on debut late last year), he’s still been inside the top five reasonably frequently when things go his way. They don’t park the truck three rounds from the end of the series for light reasons.

The guys over at Vital MX posted the biggest hint today – and I’m sure there is plenty of speculation doing the rounds at the supercross – but they say the word is Kawasaki bosses found ‘something’ in his locker.

Interestingly, Davi’s still wearing Monster branding at the event, albeit from the sidelines, so it’s certainly confusing to make out what’s happened from the outside. What is shows again is that in motocross, we lack transparency in many places that matter – sending the rumour-mill out of control and probably for the worse.

Closer to home, the big news of course in the past week has been the injury of Matt Moss at Appin, which will see him miss at least the first half of the season. Some have suggested Millspaps should take over his RM-Z, and that would be amazing to see, but it’s not quite that straightforward.

On the topic of Australian motocross, I just wanted to say a quick thank you to those who have dropped us a line about our increased coverage for this year. Things have been going our way so far and we’re committed to attending all 10 rounds (plus supercross), which you won’t see with any other publication. And so far, so good – traffic has been massive!

One world class rider we will be seeing very soon for the Coolum round, as I previously reported, is Ben Townley. He will be at the fifth stop of the season, but this weekend he’s actually on hand in Italy for the MXGP of Trentino.

Townley has been getting around as part of his advisory role with HRC, also attending the Japanese nationals last weekend and even testing the factory bikes as part of his deal. Make no mistake, BT is highly respected all around the world.

That’s it from me for today, I’ll pass it over to Makker to finish this off… 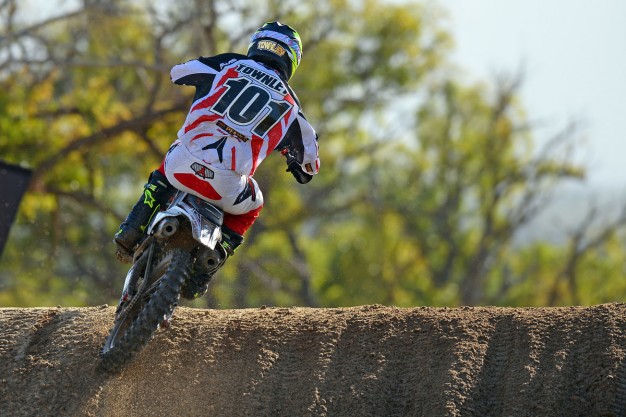 There’s a big old weekend of moto action going down at the moment, with practically every championship except the MX Nationals having a round scheduled.

The one I’m most looking forward is the fourth round of the MXGP at Trentino, Italy for a multitude of reasons. For starters, it’s the first of the local rounds after the championship’s traditional sojourn to countries outside of Europe.

The Pietramurata track is a classic Euro track – it’s hard-pack and rock-littered, features a tonne of jumps, elevation changes and off-camber corners, and has an amazing backdrop of snow-covered Dolomite mountains and huge cliff-faces.

While all eyes will continue to remain on AC222, RV2 and to a lesser extent, DeSalle and Max Nagl, I’m more interested to see if Honda’s Gautier Paulin can jump-start his season after a super-strong showing here last year.

Paulin’s fifth in the championship at the moment which is far below where most expected him to be. Another one to watch is Red Bull KTM’s Tommy Searle, who’s making his return to competition this weekend after missing the opening rounds with injury.

While all that’s going on, Trentino will also see the start of the European Motocross Championship, and we’ll be closely watching to see if Kiwi teenager Josiah Natzke can live up to the hype as ‘the next big thing’ after signing a five-year deal with factory KTM late last year.

Also overseas, the opening round of the 2015 Enduro World Championship gets under way in Chile this weekend. Australia’s hopes and dreams rest squarely on the broad shoulders of our current world champ Matty Phillips, who we’re expecting to hit a whole new level of speed and aggression this year after a solid off-season.

Closer to home, the Australian Off-Road Championship hits Hedley, Victoria, for rounds three and four of their series.

It’s a whole new venue for the riders and teams to get their heads around, and victory here will reward those who can adapt to the deep south of Victoria.

The weather’s looking a little bit dicey with wind and rain forecast both today and tomorrow, so it’ll be interesting to see how much that affects the trail conditions.

Strap yourself in, everyone. It’s shaping up to be a big weekend!