How they've fared during the 2015 season to date.

With the 2015 Monster Energy AMA Supercross title all wrapped up and the remaining three races effectively being dead-rubbers, MotoOnline.com.au pulls out the report card on the pre-season title favourites used in Feld’s #whosnext campaign – plus Aussie Chad Reed! – to see how they fared and if they lived up to the hype. Rider: Justin Barcia
Team: Toyota/Yamaha/JGRMX
Rating: C-
Rundown: Arguably one of the smoothest and aggressive riders on the track, Justin Barcia’s team switch to JGR Yamaha this year hasn’t been a smooth one. After a patchy opening five rounds where he fluctuated between fourth and 11th, BamBam had a big practice crash in the week leading up to San Diego and cracked his pelvis. As a result he was forced to sit out eight rounds and returned this weekend at Houston where he battled his way to ninth. Barcia’s aims now will be to finish the season strongly and try and improve on his current 14th position, then put this dismal season behind him, regroup and focus on his next campaign.

Rider: Ken Roczen
Team: RCH Racing Suzuki
Rating: B+
Rundown: One of the highest profile off-season switches was Ken Roczen from Red Bull KTM to RCH Suzuki. The German instantly repaid the faith by winning Anaheim 1 for the second year running, placing second at Phoenix, then again storming to victory at Anaheim 1. Just when it looked like he’d run away with the championship, Kenny cased a big triple at Oakland and finished 15th. Suddenly the kid looked vulnerable and after 4-2-2 results at the next three races, he sprained and tore ligaments in his ankle in a huge crash at Atlanta 1. He tried bravely to continue for another three races, but it was obvious he was struggling and he pulled the pin on his season at Daytona after tweaking the injury again during practice.

Rider: Davi Millsaps
Team: Monster Energy Kawasaki
Rating: C
Rundown: After proving to be one of the huge revelations in 2013 when a vastly improved Davi Millsaps carried the red plate for half the supercross season, big things were expected of the Monster Kawasaki rider this year upon return from an injury-riddled 2014. Unfortunately Millsaps’ season has been more miss and hit (he has failed to finish any higher than fifth so far) and he’s been a victim of both bad luck and bad starts. As the season progresses the Georgian has steadily regained some consistency with 5-5-7-7 over the past four races. However, it’s too little too late and realistically, the best he can hope to finish in the championship is eighth. 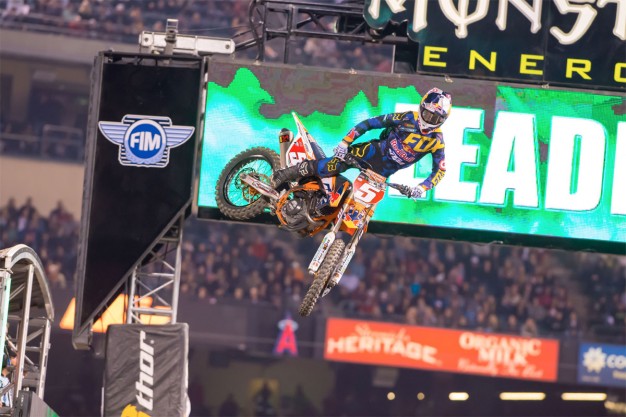 Rider: Ryan Dungey
Team: Red Bull KTM
Rating: A
Rundown: Ryan Dungey has been bloody incredible this year. He’s been brutally fast, extremely consistent (he’s only finished off the podium once with a fourth at Atlanta) and smoother than ever. While he mightn’t have been the quickest guy week-in, week-out like Ryan Villopoto was in years past, Dungey’s devastating consistency meant he leaked very few points to his rivals throughout his campaign. As a result, the always-professional Red Bull KTM racer wrapped up the 2015 Supercross title with a whopping three rounds to spare. And we just can’t stop checking out his trick Factory Edition 450 SX-F, which has played a major role in his performance this year.

Rider: Trey Canard
Team: Team Honda Muscle Milk
Rating: B
Rundown: Trey Canard is known for three things – his speed, his faith and his ability to derail every campaign with crashes and injuries. 2015 was no different, with the ginger ninja screaming to two race wins at Oakland and San Diego before having a huge tangle with Jake Weimer at Detroit that sent them both to hospital with broken arms, effectively ending their series. Canard’s biggest controversy involved Chad Reed at Anaheim 2, when he jammed himself up the inside on a small double, causing both riders to do down. Pissed off, Reedy then stuffed Canard into the tough blocks after remounting, causing the officials to over-react and throw him a black flag for his actions, disqualifying him from the race. Canard remounted again and finished 11th. While his supercross season is over, Canard should be ready for a solid season outdoors.

Rider: Chad Reed
Team: Discount Tire Racing/TwoTwo Motorsports
Rating: B
Rundown: While Reedy wasn’t a face of the #whosnext campaign, an Australian website can’t leave the Australian ‘GOAT’ out. Reed’s season hasn’t exactly gone to plan and it’s been a mixed bag for the two-time champ. As well as a momentous win at Atlanta 1 and placing inside the top 10 on all but two occasions (one of which was the black flag affair with Canard that we just touched on), Reedy should at least finish the championship in fourth place unless he completely makes a dog’s breakfast of the remaining three rounds. Fourth is three positions below where Reedy would like to be, but the wiley veteran has proved on many occasions this year that he still has what it takes to run up front and challenge for wins.