Unsung performers from Appin's second stop of the season.

MotoOnline.com.au highlights three standout performances from the weekend’s second round of the 2015 MX Nationals at Appin, NSW. Radar isn’t intended to be strictly about the winners, it’s about the unsung racers that we spot performing above expectations on any given race weekend. Jesse Dobson (Husqvarna) – MX1, 5th overall:
This teenager has really come on strong since spending last year’s supercross season with the factory KTM team, carrying that momentum into 2015 on board a factory-supported Husqvarna. Dobson made Super Pole, went 4-5 in the motos for fifth overall, and is now seventh in the championship against the best 450 riders in the country. You’ve got to stand up and take notice when new talent arrives and shines in the premier ranks. Rhys Carter (Raceline Pirelli Suzuki) – MX2, 6th overall:
It’s been a while since we’ve seen a Suzuki right up front in MX2 and Kiwi talent Carter looked right at home there during the Appin weekend. Carter was a comfortable fifth in the opening moto after posting the second-fastest lap of the race, then in moto two he challenged for the podium placings before a late crash bumped him down the order to seventh. Just like he did in MX1 as teammate to Matt Moss on the official Suzuki team last year, Carter is displaying stacks of potential in this series. 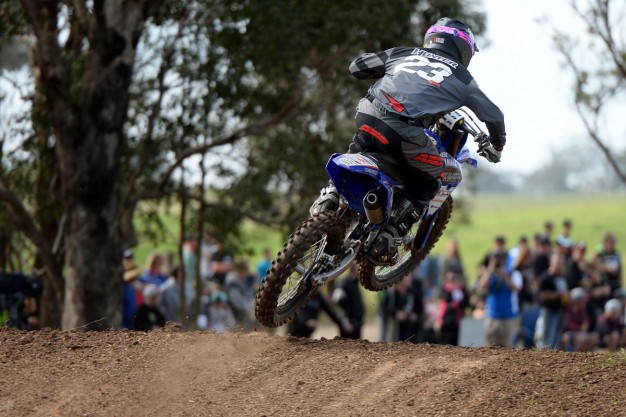 Wade Hunter (JBC Motorsport Yamaha) – MX2, 7th overall:
A rider who flies under the radar more than he should, after finishing sixth at round one Wade Hunter was again impressive at Appin on his way to seventh overall. In moto one JBC Motorsport Yamaha-mounted Hunter was in the tight battle for sixth and ended up eighth, then in the second moto he was a fine fifth with one of the faster laps on track. Persistence is no doubt paying off for the charging Queenslander.