Fresh off his incredible Dakar podium and his second overall in Enduro-X, KTM Off-Road Racing Team’s Toby Price started the Yamaha Australian Off-Road Championship in the best possible way on the weekend. In dusty conditions at Kilkivan, Queensland, 27-year-old Price dominated the two sprint days to start the championship with a 1-1 result. MotoOnline.com.au spoke to Pricey soon afterward to see how it all panned out. 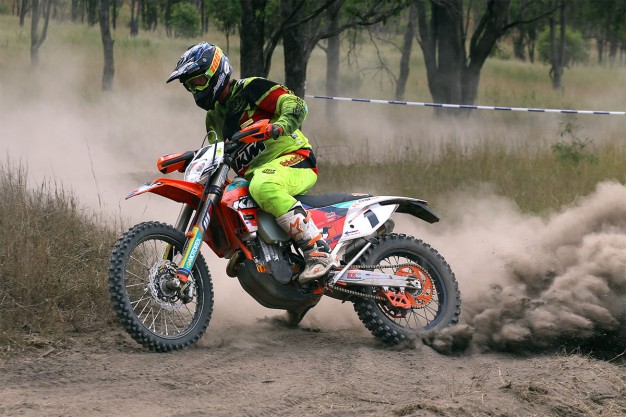 Great way to start the season, Pricey. It doesn’t get much better than a 1-1 result…

Nah that’s the dream, really, isn’t it? You definitely want to start the year with a couple of wins and we’ve done that. There’s a long way to go and I think it’s going to be a tough battle this year. The level of the sport is right up there, it’s never an easy job, but I think we’re going to have to be on our game every weekend this year. Coming into the first round of any championship, everyone wants to prove themselves and get that first win under the belt. Everyone was on the pace, even the likes of Tye Simmonds in his first event. I think this championship is going to be a bit of a nail-biter.

Even though you ended up winning both days, it sounds like you had a bit of a rough day on Saturday. What happened?

There was a bit of cat and mouse going on and I made a few mistakes and had a crash. In the second sprint race Chris Hollis derailed his chain and I got caught in his dust. That made me slow down and everyone caught up. In the third race I had a crash and bent my ‘bars and levers – I hadn’t done that in a while – but was able to win the fourth heat. In the fifth heat I got stuck behind Chris after he crashed again, but in the sixth heat I pulled everything out and won by five seconds over Beau Ralston. It was an up and down day for sure. Sunday went really well though – I stayed on two wheels and pulled a good gap on everyone.

How was the transition going from Dakar to Enduro-X to off-road racing?

It wasn’t so bad. Endurocross is cool, but it’s not my forte – I like having more speed and not so tight. In saying that though, it was fun and I was lucky I got through without any injuries. A few of the guys are carrying some niggles, which is going to make it hard for the rest of the season. We came out of it pretty good and I’m looking forward to getting into the enduro and desert stuff now.

Which format do you prefer – Sprints, Cross Country or Enduro?

To be honest I don’t mind all three. I think the Sprint format, where you do six 10-minute lap races, suits me a little better, but I love Cross Country racing. It allows you to get into a rhythm and I seem to have a bit more in reserve on longer races. In saying that everyone’s lifted their fitness a lot over the past 12 months and all disciplines are going to be tough to win. I don’t think I’m going to walk away with the championship, that’s for sure. 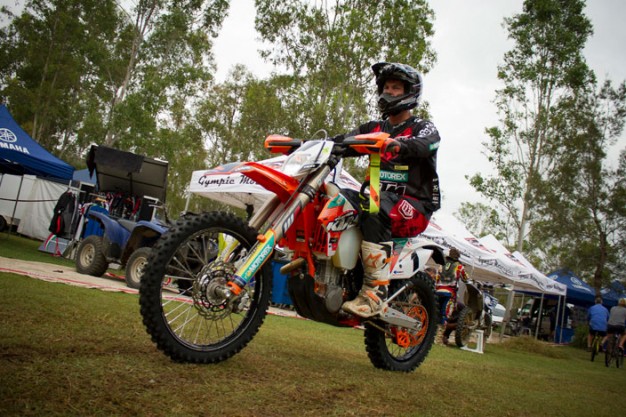 Image: On The Pipe Images.

What did you think of the Kilkivan venue?

It was the first time the AORC had been up there and I thought it was run really well and the club put in a lot of effort. It was a shame that it was really dry and dusty, which made it hard with the Sprint format. There was no breeze so the dust just hung in the air, even though they opened the gap between riders up to a minute. They had to make it safe and fair for everyone and that was all they could do, really. When you start adding more time between riders there was more down-time between laps, but that’s the way it goes sometimes. In some of the really dusty tight single-trail sections you couldn’t see a thing and I couldn’t push as hard as I would’ve liked without hitting rocks, stumps or that sort of thing.

This year you’re riding a KTM 500 EXC. How’s that change been from the 450 you rode last year?

The 500 suits me well. I love the power and it has plenty of torque and traction, and if you pull a gear up and carry more momentum, it’s a lot of fun on tracks like we had on the weekend. If the next couple of rounds are tight and physical it won’t suit it that well, but when the courses open up it comes into its own. We’ll just have to see what each round brings and take the good with the bad. Hopefully the rounds will suit the big girl all year long!

Awesome, thanks legend. Catch up with you soon.