The Honda Shop Racing Team’s Cody Cooper became one of a small, select group of racers on Sunday when he claimed his third New Zealand MX1 championship in a row. The 31-year-old was a cut above the rest of the field again this year and is once again setting his sights on the elusive Australian MX Nationals title. MotoOnline.com.au caught up with Coops as he packed his bags to fly to Melbourne for some testing with his Penrite Honda Racing team to find out where he’s at. 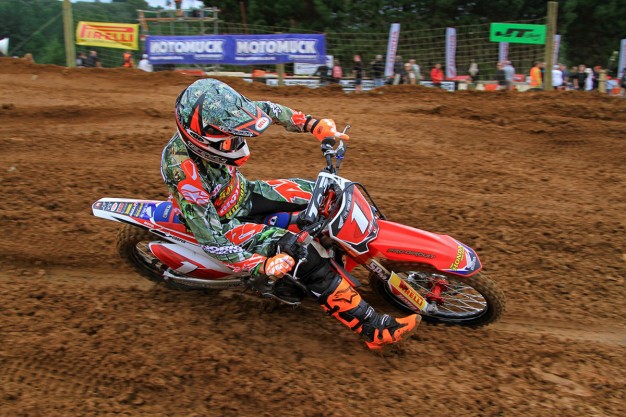 I think it kind of feels the same and I didn’t think too much about the hat-trick really. This series, think I used my head a bit more and was more sensible in my approach to it. Going into the first round I knew I wasn’t riding that well as my knee was still a bit funny in the front with the scar tissue that was built up, so I just got as many points as I could, then over the next three rounds I ramped things up as my leg got stronger. My leg is pretty much perfect now – I’ve been stretching it out with yoga and stuff and it’s now at the point where I can finish a day of racing and it feels fine.

Did you have any nerves coming into the final round at Harrisville on Sunday?

I wasn’t too bad actually. I’m pretty lucky where I don’t get that nervous. When I’m walking to the starting line I get amped up with adrenalin, but that’s usually it. Going into Harrisville I had a 19-point lead over Kirk Gibbs, which isn’t massive, but it was handy to maintain. I wanted to try and win the first race and put myself in a good position for the second race and try and wrap the championship up before the last moto. With Cyclone Pam coming in, we didn’t know when it was going to rain, so I wanted to get as many points in the bag before it started coming down. I ended up going 1-2-2 over the day. I led the first race from start to finish while Gibbs finished seventh, then I led moto 2 until the last two laps when Gibbs came around the outside past me. His bike is so quiet that I didn’t hear him coming and I got a bit of a surprise when he came through on the left of me. He’s stealth on that thing! In the third moto he came up and past me again, so I tagged onto the back of him and stayed there until the end. We were still going pretty quick, but I felt like I was in control the whole time. I’d already won the title and I didn’t want to push too hard as my focus was all on Australia from then. Australia was on my mind before I even lined up for that last race.

As was the case last year, you’re carrying a lot of momentum into the MX Nationals in two weeks’ time. How are you feeling at the moment compared to this time last year, when you felt you were the best you’d ever felt?

Yeah it feels like last year doesn’t it? I’ll make it past the first round this time [laughs]! This year I’m approaching it differently; I’m not necessarily going to go out to win at Horsham, but I’d like a top three to five and work from there. I want to get that first round out of the way then work into the championship. But yeah, my setup on the bike is a lot better now, and I feel my cardio is better than it was a year ago. My leg probably isn’t strong, but I think overall I’m in a better place. 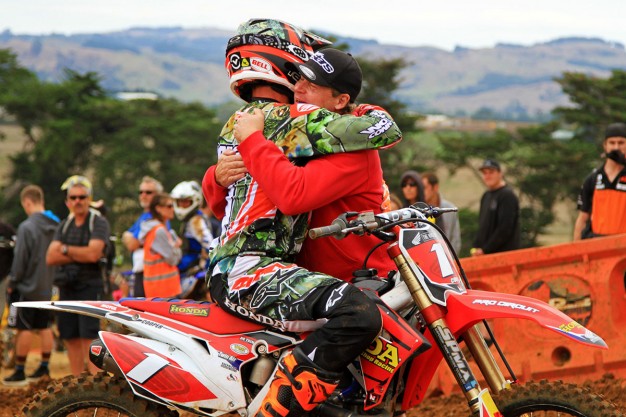 It’s been said that even though you’re fast at home, you struggle to maintain the same pace and momentum in Australia. Do you think this year you can bring the heat consistently for 10 rounds?

Definitely. In the past I haven’t done stuff right, I was lazy, lacked a bit of motivation and relied on my talent to get me through. Ben Townley helped me a lot last year and I learned heaps about training and training for a reason. Now when I go into a session I’m not just going through the motions – I know what I want to get out of it, and it’s something I wish I’d learnt earlier.
As for racing, I’m sick of having to prove a point to people. I just want to do it for myself now. If people don’t want to believe in me, well they can bugger off. I’m going out there to race for myself and for the people who believe in me. I definitely think I can do it this year. My starts are really good right now and I feel like I can holeshot anything.

Who do you think is going to be the biggest competition this year?

Obviously Gibbs and Mossy will be right up there, but there are heaps of young guys who have come through last year and this year who I haven’t raced yet. Last year I only did one moto and I felt strong, but you can’t gauge anything from one race. I’d love to add the MX Nationals title to my collection. Since 2002 I’ve been racing in Australia every year except 2008 and 2009 and only won the 2004 Lites championship. It goes by fast eh!

It certainly does. When are you headed to Australia?

I’m actually heading to Melbourne tomorrow for some testing. I’m going to stay a lot more there this year rather than traveling back and forth every weekend. I’m looking forward to getting over there, putting some hours on the new equipment we’ve got from our sponsors and getting ready for the new season.

Sweet as, thanks for the chat man, and good luck for the MX Nationals.