Suzuki’s RM-Z450 has been a big player on the motocross scene in Europe, America and here in Australia with Matt Moss taking out several motocross and supercross championships on board the motocross model, however it has been another story in off-road since the RMX450Z’s introduction in 2010.

Since the RMX didn’t have ADR approval upon its local launch, it limited the brand’s market and also the overall push from Suzuki Australia to get the bike out front on the race track.

Now, the 2015 RMX450Z 2015 is here with more attitude and racecraft than ever before, including a competition kit that features the following upgrades within the retail price of $12,490 plus on-road costs: Single filament headlight; non-pressurised brake banjo bolts; push button ignition; RMZ kill switch; plus Dunlop D702 front and D756 rear tyres.

Compared with the RM-Z450, the frame geometry is refined for enduro along with the Showa suspension especially developed for off-road and it has an 18-inch rear wheel. The five-speed engine features different compression ratio, cam profiles and transmission ratios all revamped for the extreme conditions of enduro riding/racing and, of course, we can’t forget the electric start. We were invited out to the Victorian high country for Suzuki’s official launch of the RMX and spent two days at the Mt. Buller Motorcycle Adventures base camp, where we had the chance to put the bikes to the optimal test amongst the epic trails of the region.

Initially when I jumped on the bike I found it to be slightly rigid and have a firm overall feeling; the seat was pretty hard along with the forks holding the bike up in the stroke making it feel firm.

The morning was crisp and after 30 minutes the bike did start to feel better and better. I found that the bike wanted to be pushed, because the harder I rode it the plusher and smoother it felt even over sections where I thought that I might lose traction.   In fact once I got my head around how the forks were set up I gained more and more confidence.

When put under pressure coming through rough sections, breaking bumps and hard hits, the bike was really planted – it’s more of a race-spec set up. With this in mind, I weigh 90kg and ride at a pro level, but even when I was cruising around riding at trail pace I found the bike to deliver a equally smooth and safe ride. I rode the bike for five or six hours and came across a lot of different terrain such as rocky single trail, up and down steep gnarly washed out hills along with all types of logs and erosion mounds, not to mention some cool water crossings. I even laid the bike on the ground where I got caught off-guard on a slippery log and hit the deck before I even knew what happened.

I picked the bike up and thought ‘okay, what did I wreck?’. Slightly surprised, I started to look over the bike to spot any damaged parts, but radiators were still sweet and the levers were still in one piece. The only thing was that the ‘bar mounts had twisted slightly and that’s an easy fix.

I did however miss having a set of handguards on the bike in some of the tight bushy terrain, but Suzuki has decided to leave the handguards out. In one way it’s not a bad move though, because handguards are such an individual product and most riders have a preferred type anyway.

The standout for me was that the bike handled most things well. I had good tyre to ground feel, inspiring confidence and trust to the motorcycle, and the smooth engine made the ride really enjoyable. A common issue on trail bikes is stalling of the engine, but Suzuki have really nailed it here. It has a really powerful bottom-end to mid-range power, which is what most riders are looking for in an enduro engine. And the rotation mass is so spot on that I didn’t stall the bike once. I could literally lugg the bike around tricky single trail in third gear no problems.

For the more experienced racer there are a few things to look at. When I pushed the bike I found it lacked a little up top and simply needs more power and RPM. One very simple fix is to just click up a gear and away she goes, but when your racing every gear change is critical. The bottom-end power allowed me to hit the corner in third, but still didn’t get me the distance I wanted on that gear.

Standard the bike comes with a 51-tooth rear sprocket and that’s pretty big for an enduro 450 – at least for competition – so I would experiment with different gearing, starting out with a 49 or 50 rear sprocket.

The airbox is probably the first place to start playing with to gain power as the engine needs more air. Second would be an aftermarket pipe to give the bike a different power delivery, but many riders out there would be surprised though at how fast the stock pipes actually are. 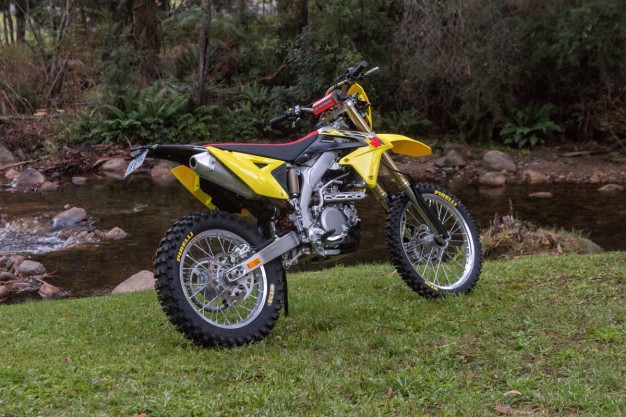 Third for me would be looking at any excess weight we can shred off this bike as it comes in at 124kg and is a little heavier than some of its rivals. Aftermarket pipes are normally lighter than the stock pipes and you could also potentially fit a lightweight lithium battery.

Fuel economy and tank size is a never-ending talking point when we discuss enduro bikes and the RMX tank takes 6.2L. This is fine for most races apart from a three-hour cross country, but the average trail rider will want to be able to take off with his mates on a ride and be confident he will make it home after 60-80 kilometres at a minimum. We didn’t run the bikes dry on our ride, but 6.2L would be pushing it.

Suzuki has forever had a big presence out on the trails and countryside with the DRZ400 workhorse, which remains is well-respected amongst trail riders and is a hit with farmers around the country.

And now with the RMX450Z as its new flagship off-road motorcycle complete with ADR approval, we are just as exited as Suzuki to see how well it takes off in Australia.

In addition, Suzuki has started to build up a range of Suzuki genuine accessories for the RMX and you can purchase the following hard parts: Bash plate; case saver; radiator braces and rear disc guard. 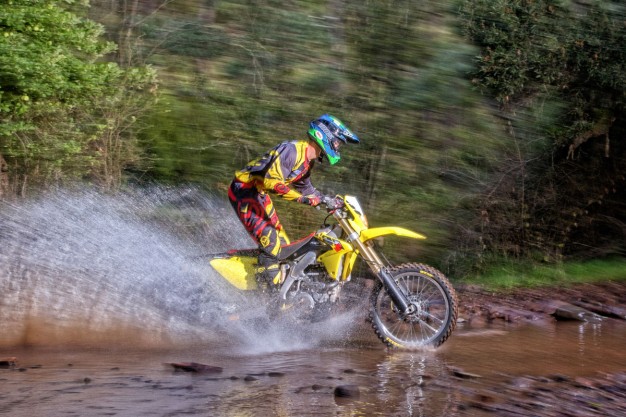