For quite some time the Suzuki RM-Z250 has been a bike that basically anyone can swing a leg over – either beginner or pro – and really enjoy themselves out on the track. The RM-Z250 is well known and liked for its user-friendly chassis and engine combo, and for that reason, here at MotoOnline we’re glad Suzuki haven’t made any drastic changes to the 2015 model.

It comes down to the old saying, why fix something that isn’t broken? Suzuki engineers know they have a solid package and have continued to use that base with minor tweaks here and there over the past few years. You may remember our 2013 Project Moto Suzuki RM-Z250 that we absolutely loved? Seeing as the bike hasn’t changed a whole lot, we were pumped to get our hands on the 2015 model.

For this year Suzuki have updated the ignition programming to improve the starting performance of their 249cc fuel-injected DOHC engine. A new ECM with higher processing performance and a new high power ignition coil also improves combustion efficiency for increased roll-on performance.

The crankcase reed valve has been revised for more efficient lubrication. A new oil strainer has a stronger magneto to capture contaminants from the engine oil and together these changes contribute to better throttle response and smoother power delivery. The fuel-injection system features a 44mm throttle body with progressive throttle linkage and a 16-bit computer. The fuel injection system uses a unique capacitor-assisted starting system and is powered by a durable, lightweight magneto-generator after starting.

We can’t stress enough just how strong this engine package is overall. MotoOnline test rider Dylan Wills was super-impressed with the engine after jumping onto the RM-Z250 following countless laps aboard its big brother, the RM-Z450.

The RM-Z250 engine provides awesome roll on power and it is delivered in a silky smooth fashion. The RM-Z may not be an absolute top-end monster, but with two couplers included for quickly adjusting the fuel setting, you can quickly change the engine characteristics and really open up the mid to top end.

As you know, in the past we have had a chance to tinker with a very similar engine package to the 2015 RM-Z250. The use of the lean coupler to make the engine more aggressive, paired with a Yoshimura exhaust system will undoubtedly give you plenty of top end power to play with.

Speaking of exhausts, the 2015 RM-Z250 muffler body now uses conventional bolts in end cap instead of rivets to make life easier when you have to repack your muffler, something we’re glad to see for the new year. 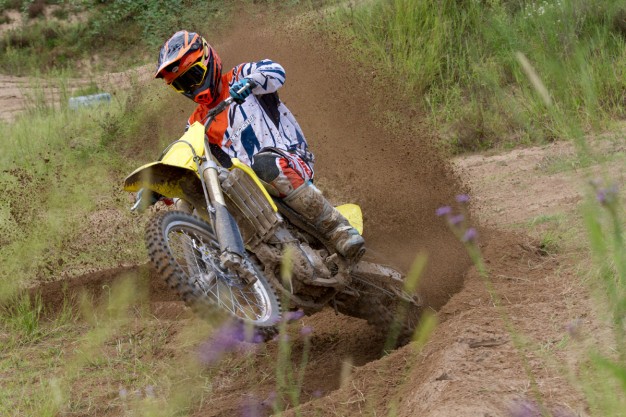 The transmission design achieves a smooth yet solid shift feel, you’ll barely find yourself missing shifts aboard the RM-Z250. According to Suzuki, the method of fastening the sprocket helps create a quicker shifting feel.

Okay, so the engine is definitely great and it’s a winner in our eyes, but it’s time to talk about the aspect of the RM-Z250 that truly makes this bike such a strong contender amongst the 250cc four-stroke market – the chassis.

For years the RM-Z250 has been known as a superb handling bike. It has always turned on a dime, felt stable at speeds and featured an impressive suspension package. Over the past few years Suzuki have really fine-tuned that setup and right now it’s seriously impressive.

The Separate Function front Fork (SFF) from Showa separates the spring and damping tasks. The right leg holds the spring, while the left leg incorporates the cartridge assembly to manage damping. This results in reduced friction, increased absorption performance and weight saving. 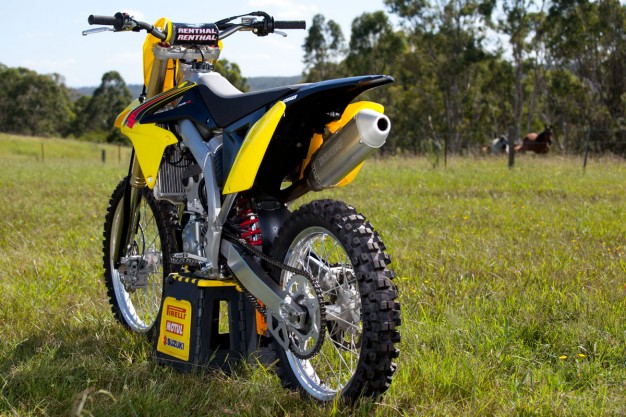 What this fork also offers and the ability to fine tune your settings and really feel those changes on the track. The fork responds to any tiny changes you make, the feedback it provides to the rider is awesome. Surprisingly, here at MotoOnline we haven’t loved the SFF fork on other manufacturer’s models in the past, but on the Suzuki RM-Z250, it’s great.

To maintain the RM-Z’s renowned handling performance, the rear-end features a Showa piggyback shock with setting changes and adjustments to best match with the increased engine performance and fork settings. With the help of Team Motul Suzuki’s Jay Foreman, we were able to fine-tune the rear end and Dylan was thoroughly impressed with the shock’s response to any changes we made.

Suzuki engineers have also gone ahead and refined the frame and seat rail for optimised rigidity balance. The goal of this change was to create an ideal balance of nimble handling and stability. We feel that Suzuki has nailed that for 2015, the bike will literally go anywhere you want, yet it remains very stable at speeds. A perfect combination.

In the looks department the 2015 Suzuki RM-Z250 remains very similar with only slight changes to plastic colours and graphic updates. The standard gripper seat also features a cross-hatched pattern up top and a rough surface on each side for improved grip under acceleration. As standard for 2015 the Suzuki RM-Z250 features Excel aluminum rims in the factory silver colour along with the Renthal aluminum Fatbar that offers optimum strength and less vibration than regular aluminum handlebars. Ergonomically the 2015 Suzuki RM-Z250 is super comfortable and provides that racey feeling we all look for.

Coming into the day, we already knew this bike would be solid, because with minimal changes over recent years it was obvious the bike would still continue to impress. This is something that’s actually quite interesting with the recent major updates to a majority of its competition.

If you’re looking for a 250cc four-stroke that offers amazing handling characteristics, a confidence-inspiring ride and very strong engine package, we highly recommend checking out the 2015 Suzuki RM-Z250. Whether you’re a weekend warrior having some fun with your buddies, or you’re a full-time racer, the RM-Z250 will have you covered.