The 2015 Honda CRF450R is exciting for a few reasons. It’s always been known as a super smooth, user-friendly bike that turns on a dime – who wouldn’t want to ride a bike with those characteristics? Also, we’ve recently seen riders such as Trey Canard, Eli Tomac, Ben Townley and Jay Marmont achieve strong results on the Honda 450 in their respective events.

Honda hasn’t gone crazy with changes to their premier class contender, but instead they’ve slightly massaged the current model to further improve the overall package. For 2015 Honda focused on engine updates, suspension changes and mass centralisation of the machine.

The goal for the 2015 CRF450R’s 449cc, liquid-cooled, Unicam (SOHC), four-valve, four-stroke engine was to gain more mid-range and top-end performance without losing any bottom-end power.

In order to make this happen, Honda’s engineers designed a new cylinder head that retains the same combustion chamber shape and same size titanium intake and steel exhaust valves, but its exhaust port has been revised.

The exhaust now exits to the right side of the engine when viewing the bike front on (no more wrap-around). The length of the header pipe has been adjusted so that it no longer comes out and wraps around the downtube of the aluminum perimeter frame design. 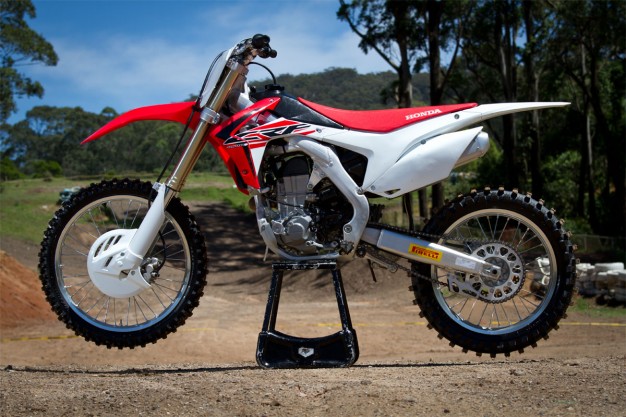 The shorter header length, combined with redesigned mufflers, help the new CRF450R maintain the smooth torque of the 2014 model while still reaching the increased mid-range/top-end goals of the 2015 model. To raise the rpm at which the CRF450R’s peak power occurs, revised ignition timing and fuel settings for the Dual-Timing PGM-FI fuel injection were also incorporated.

As with the 2015 CRF250R which we tested recently (click here to view that test), 2015 CRF450R also receives Honda’s latest innovation, the Engine Mode Select button, which allows the rider to access multiple EFI/ignitions maps stored in the CRF450R’s ECU simply by pressing a button mounted on the right side of the handlebar.

The first is the stock map, which cannot be altered, but the other two are custom maps that can be reprogrammed using an HRC accessory tuning tool. In stock form, mode two alters the ignition timing and fuel curve to enhance traction on slippery surfaces, while mode three is more aggressive for deep or high-traction surfaces.

Simply pull in the clutch and push the button. A flashing light will appear with a corresponding amount of flashes that lets you know which mode you are in. MotoOnline.com.au test rider, Dylan Wills, was a fan of the mapping options and once again found the aggressive setting to suit his riding style the best.

“We got to play around with the mapping and I was a massive fan of the aggressive map, being able to place the bottom end power where you needed it was great,” Wills commented. “I think the three different options would come in handy later down the track especially here in Australia with the way the tracks change. 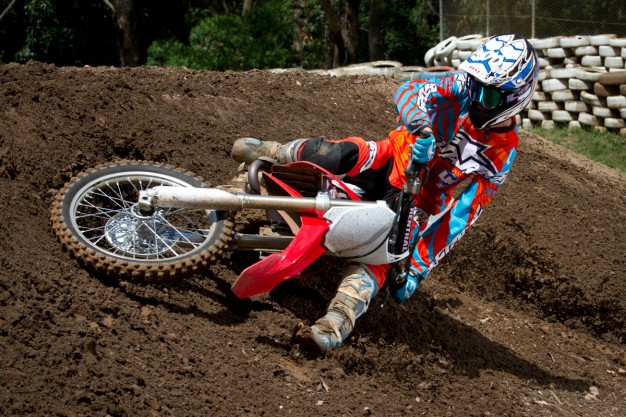 “I think having the three different settings will come in handy for either an average weekend rider or a racer. You will definitely benefit from being able to have it tamed down a little bit, or with the push of a button have an aggressive bike right away.”

Chassis-wise, the 2015 CRF450R’s aluminum perimeter frame has been left unchanged for the new year, but both the front and rear suspension is where the engineers have put together some welcomed additions.

Up front is where the big changes have occurred, the 2015 CRF450R features a new version of the Honda’s 48mm KYB Pneumatic Spring Fork (PSF). Honda chooses to use the KYB fork for the CRF450R, while the CRF250R uses the Showa triple air fork design for 2015.

The PSF fork is designed to compartmentalize the compression and rebound adjustments, which allows high and low speed adjusters on both sides, giving the PSF an impressive amount of adjustability. The compression damping is located in the left leg, and the rebound damping is in the right leg, with the valve specs being the same on both sides. The fork is also self-lubricating. 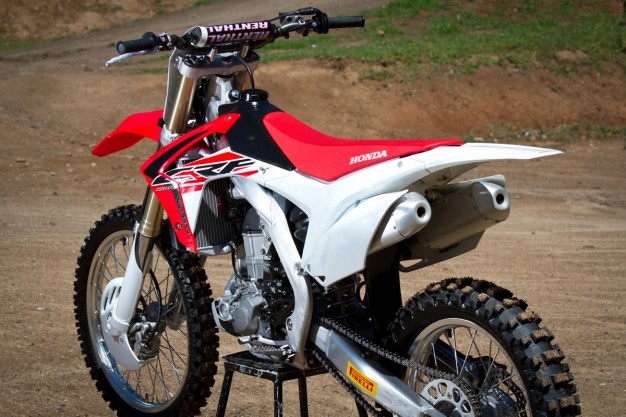 “I really liked the way they turned, especially in the slow speed stuff,” said Wills. The wheel really stuck to the ground and I could turn it on a dime thanks to the KYB PSF fork.”

Although Wills felt super confident in the slower sections, he did find it hard to dial in the front end for the faster sections of the circuit.

“I definitely had confidence in the front end through the slower sections,” he added. “Although I did struggle I little bit at higher speeds, but with more time on the bike I’m confident we could find a good fork setting to cure that issue. Overall the new PSF fork from KYB is a strong package.”

For the rear-end, Honda made changes to the CRF450R’s KYB piggyback-reservoir shock. The suspension updates include new high and low speed compression adjusters for 2015, as well as the usual rebound damping adjuster, but the rebound damping adjuster has been moved to a new location. It now sits with the compression adjusters making access to all three adjustments super easy.

The rear-end performance of the 2015 CRF450R was one of Wills’ favourite features on the bike, tracking its way through the hard pack surface with ease throughout the day. 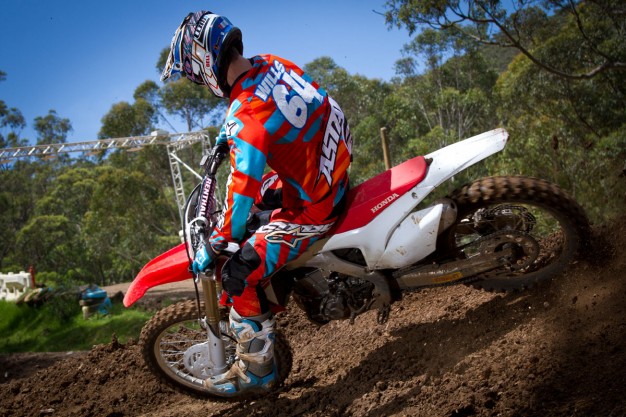 “The rear was unbelievable out of the turns, it tracked really well, especially out of the slower turns,” said Wills. “We were riding on a hard pack track, so it was definitely a great way to the rear end of the bike, and it came through with the goods in every way.”

Ergonomically the 2015 Honda CRF250R remains the same with the only noticeable change being updated graphics for the new year. As expected, the Honda was comfortable and ergonomically pleasing for Wills.

“The bike feels pretty slim, not too slim, but not too wide at the same time,” Wills commented. “It’s definitely not the widest bike in the 2015 450 range and it’s really comfortable to ride – no complaints in the ergos department whatsoever.

“Overall I think the 2015 Honda CRF450R is a great package with a strong suspension, chassis and motor package. I’m sure it will be a top contender in the opens class during the 2015 season. I have to say a huge thanks to Wollongong Motorcycle Club for allowing us to use the track for the day and a big thanks to Honda Australia for sending us the bike.”