And fellow test rider Dylan Wills, who recently took the 2014 SXD Australian Supercross Championship aboard a 2015 250 SX was clearly excited to throw down aboard his regular machine of choice.

The KTM 250 SX has continued to give four-stroke MXD and MX2 riders major headaches over the past few years, and it’s not hard to see why. This bike has come leaps and bounds in recent years and it’s super impressive as an overall package.

Obviously for 2015 the 250 SX receives the same fork upgrade as the rest of the SX-F range. The 4CS fork by WP is by far the most significant and impressive update, these forks work wonders for the overall feel of the chassis.

Much the same as the SX-F range during our test, initially we were experiencing a slightly harsh ride in the front end before both myself and Dylan opted to go five clicks softer on the compression and one click slower on the rebound. These changes completely altered the feel of the fork and we were both instantly comfortable. 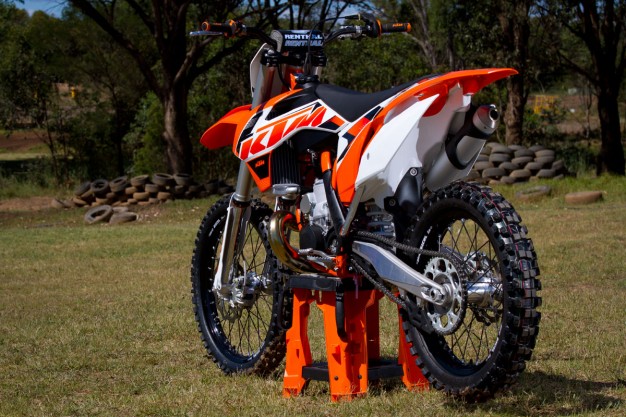 Obviously Dylan was familiar with the handling characteristics of the 2015 KTM 250 SX leading into the day, but for me the 2015 KTM 250 SX equipped with the 4CS fork felt like a totally different bike. Cornering the 250 SX is an absolute dream, I was super impressed by how well this bike turns.

Under braking entering corners the 250 SX also performed surprisingly well. The front end provides such confidence inspiring feedback that you’re never scared to push that little bit further than you usually would. By no means am I pushing the bike to its limits, but personally, I could go deeper and faster into corners than I ever thought possible.

With an all-new front end, the 2015 250 SX also receives a rear end upgrade with a longer shock and an updated linkage to optimise geometry. The flatter progression with a higher initial rate ensures greater stability and lowers the rear end. In addition, the new design saves another 40 grams of weight.

These updated suspension components are mounted to a lightweight, high strength, chrome-molybdenum steel frame. The frame combines maximum longitudinal stiffness with optimum torsional stiffness. A forged and milled cross-tube connects the two frame halves with the connecting rod of the linkage on the new SX frame for 2015. The unique steel frame design of the KTM 250 SX is something that some people like, and some people dislike – here at MotoOnline we’re fans of the design. The steel frame especially shines through on the powerful two-stroke in hard pack conditions. The added flex throughout the chassis allows you to get that power to the ground and flow around the track.

Engine wise, the 2015 250 SX is a beast. There’s more power there than any weekend warrior could ever ask for. In saying that though, if you watch riders such as Dylan or Kale Makeham for example – they both ride the bike a gear taller and utilise the torque to its full potential.

I obviously took note of their technique over time and put it to use on the 250 SX. It’s undoubtedly the way to ride this bike, the chassis works better, you don’t pump up as fast and you can really flow around the track. It takes time to get used to it, but once you do, you’ll really enjoy yourself thoroughly.

This is all thanks to the way KTM have designed the 250 SX engine package. Powerful, plenty of torque, but very user friendly at the same time, it’s actually quite mellow if you rider it correctly. Although Dylan mentioned that with some slight jetting tweaks you can really make this bike an animal to ride – something to note for those racers out there. 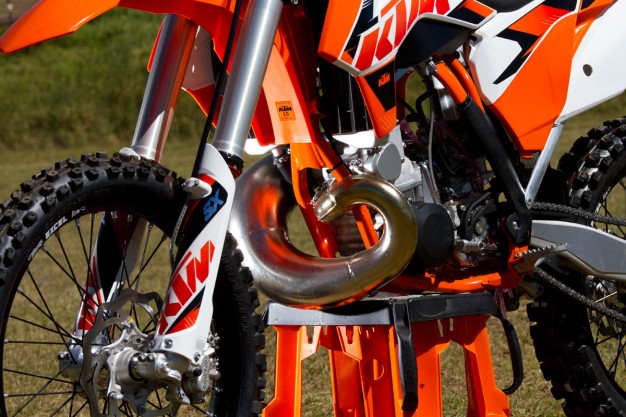 The overall chassis and engine package on the KTM 250 SX is killer. The nimble and super comfortable chassis combined with the lightweight 250cc two-stroke engine is a real winner. Dylan was clearly a fan of the bike before we started, but once we were finished, it had two huge fans that’s for sure.

A new DDS clutch (Damped Diaphragm Steel) with diaphragm spring and wear-free steel cage has also been fitted to the 2015 KTM 250 SX engine. The diaphragm spring, which preloads the package, not only reduces the operating force required to pull the clutch, but also provides space for integrated hub damping.

The result of this upgrade is more traction and protection for the transmission. And with updated hydraulic clutch actuation from Brembo, we’re now provided with more control from the get go. Clutch and shifting characteristics on the 250 SX are precise and super solid at all times.

The 2015 250 SX features high-tech brakes from Brembo paired with lightweight wave discs. These brakes are impressive, there’s no denying that KTM has the best brakes on the market today. The power these Brembo brakes provide is hard to match. In the cockpit, the tapered Renthal Fatbar 827 handlebar can be fixed in a choice of four positions. We opted to leave the ‘bars in the stock position while rolling them back slightly to suit our riding styles. For 2015, the 250 SX is also equipped with softer two-component grips to spare the rider’s hands.

KTM have gone with a fresh graphic design for 2015 featuring a lot more white compared to previous models, both myself and Dylan are huge fans of this design. The added white, paired with the orange frame, black Excel rims, black spokes and polished hubs really stands out. Aftermarket graphic and accessory companies will have their work cut out for them to improve these looks.

Overall the 2015 KTM 250 SX is a bike that does take some time to really work out, but once you do, it’s an awesome piece of gear. You’ve got power on tap, light and nimble handling characteristics, easy maintenance and an absolutely badass looking ride. Be sure to head to your local dealer where the 2015 KTM 250 SX will retail for $10,995.