Three different 2015 Shift Gear Sets could be yours! 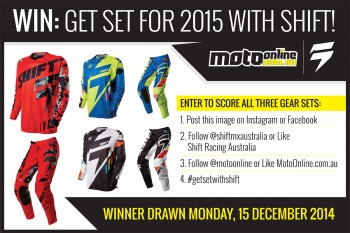 MotoOnline.com.au in association with Shift Racing Australia has launched a new ‘Get set for 2015 with Shift’ promotion.

Readers can enter and go into the running to win not one, but three sets of 2015 Shift Gear Sets that will set you up just in time for the new race season!

For further information on the 2015 Shift range – now available in dealers nationally – be sure to click this link.