Bourke’s Tye Simmonds shocked a lot of people last year when, at the age of 21, he retired from professional motocross. However just last week, Simmonds again surprised the masses when he revealed he was returning to racing… but there was a twist. Instead of lining up on the 40-rider starting gate, he’s heading into the bush as part of the KTM Enduro Racing Team. If that wasn’t enough, Simmonds sent the industry into fits when he beat Australia’s best off-road racers to win his first-ever race at the Australian Motorcycle Finance Head-2-Head EnduroCross competition in Melbourne on Saturday on a stock-standard 450 EXC. With so many waves being created so quickly, we caught up with the now 22-year-old to find out what the hell is going on. 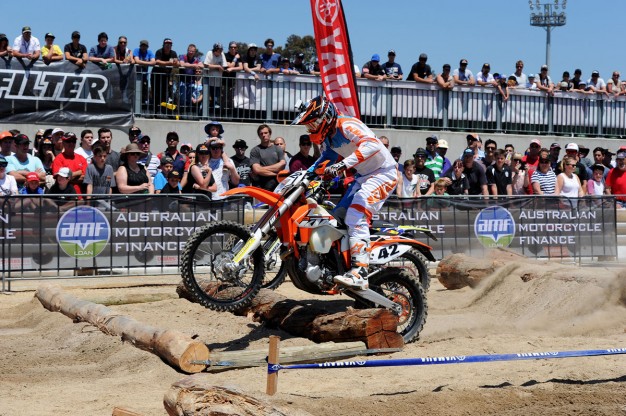 Alright, Tye, spill the beans. What’s behind your decision to come back to racing?

Mate, to tell truth, I’d been off the bike for 18 months and it was the longest break I’d ever had from racing. I’d had enough at the time and needed to spend some time away from the scene. After a while I decided to have a ride here and there, then we tried to sort out a motocross or supercross ride for 2015, but no-one wanted a bar of me except for Craig Anderson. At the same time a mate of mine, Ben Grabham, who’s the team manager for the KTM off-road team, was pressuring me to go ride the bush. I wasn’t too fussed on the idea, but anyway, I went for a ride to keep him happy and I absolutely loved it. We rode some moto, trails, enduros and stuff and I came away thinking “wow it’s so good to be back on the bike”. Being back on the KTM has put the fire back in my belly and ignited my love for riding big-time.

Did you contemplate trying to come back to motocross off your own bat at all? I guess though, if there was a choice between a factory off-road ride and a privateer motocross and supercross deal it’s a pretty easy decision to make.

Yeah that’s exactly it, mate. No-one was keen to offer me anything and fair enough, as I’d been out of the scene for over a year. We tossed up going down the privateer path again, but after what happened when I was on the Honda – we spent a tonne of money and I ended up getting injured and it was all wasted – we decided it wasn’t worth it. Then this deal with Grabbo popped up and it was an easy decision for us to make. He’s a super-cool dude and he’s given me a contract for next year and I couldn’t be more excited to be on one of the best off-road teams and try something different.

What had you been up to since you announced your retirement last year?

I spent a couple of months doing nothing! We’ve got a good block on the water, so I did a bit of barefoot skiing, relaxing, and hanging with mates, a bit of footy and pig-hunting. I did a bit of goat mustering and a stint in the mines and saved hard with the intention of getting my chopper licence and buying a helicopter for mustering, but that’s gone on the back-burner now that I’m back riding. 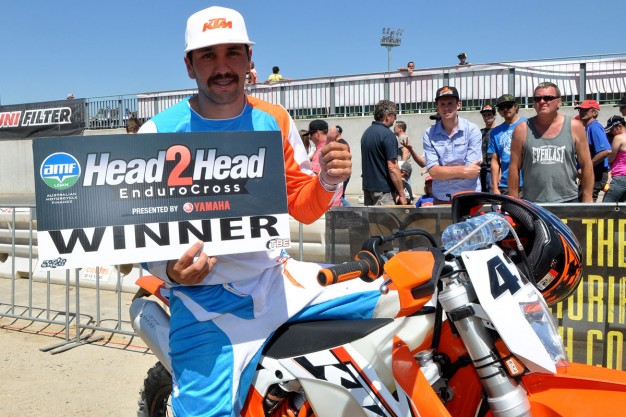 Cool. So let’s talk about your first race at Melbourne. It must’ve almost felt like you were going racing for the first time again.

You hit the nail on the head, mate. On the weekend I felt like a little kid again riding a 65cc on a new track. I was so pumped and excited to check out the course and ride it. It’s like I’ve got a brand new spark inside me. Dad and I had no idea what to expect from the EnduroCross though. Grabbo told us to come down and see what I thought of it, but when we first saw the course we were gobsmacked. Dad looked at me and asked me how the hell we were going to get around it! It was a bit easier than it looked when you got out there, but yeah, she was pretty daunting at first.

On top of that, you won your first off-road race at your debut appearance on Saturday. How was that?

It was awesome, hey. And to do it on a bike that we’d rolled out of the box and only had one hour on the clock was even better. In the head-to-head format they invited 20 riders, and after the first round that dropped to 12, then eight, then four, then the top two rode the final. I struggled with arm pump on Saturday and barely got out of first gear, but I was rapt to get the win. On Sunday I set the quickest time in the first heat, but in the top eight race I dropped it on the balance log and that was the end of it. In the blink of an eye I was on my head and my day was over. It was pretty funny.

So what are your plans for 2015? Are you just doing Enduro-X or are you racing the entire off-road calendar?

Yeah the whole thing. It’s going to be a busy year and it’s all going to be new and different to me, with the exception of the Hattah Desert Race. The Enduro-X starts in February with three rounds, then there’s the Australian Off-Road Championship, as well as Finke, Hattah and the Aussie 4-Day. It’s good to get back into it straight away and I can’t thank Grabbo and the KTM off-road team enough for giving me a shot at it all.

Brilliant. Well, all the best for next year, mate, and welcome back to the Australian race scene.

Thanks, mate. I’ll be speaking to ya.