Queensland’s Brenden Harrison made an emotional announcement earlier this week that he will step away from professional motocross for the foreseeable future following a long list of troublesome injuries. The KTM racer has been a consistent contender when healthy, however another complicated leg break sustained at the Brisbane Entertainment Centre’s supercross final was enough for him to draw the line in his career. MotoOnline.com.au spoke to Harry about his decision and plans moving forward. Well Harry, the decision’s been made and announced. How are you feeling?

To be honest, it wasn’t really a hard decision. I haven’t really been enjoying myself all year; I had a few little injuries and then this one is really complicated and it tipped me over the edge. So, it takes its toll eventually and none of the breaks that I’ve had have been simple ones. This one’s a big spiral fracture, pretty much damaged the whole lot of my lower leg, so that made my decision.

Injuries have obviously taken a huge toll on your career, but in saying that you’ve had plenty of success whenever you’re on track. Tell us about your decision to walk away from racing…

I guess it becomes frustrating more than anything. I just find my feet again, then take another six steps back. I try build my fitness, strength and everything back up, but when I’m racing I know I’m not where I should be.

Support from the industry and your fellow competitors has been amazing though, hasn’t it?

100 percent. I feel it’s one of the best industries in the world and the lifetime friends that I’ve made is overwhelming. That’s half the reason I’ve been coming back and why I’m still considering supercross next year if I get the fire back in my belly. I’ll still be involved in the sport, I just love it.

Looking back, what are the highlights of your career?

The highlights were probably winning a few supercross races, getting a ride in Europe and racing over there for a bit before injuries stopped that as well, and there has been a lot of memories. There wouldn’t be any specific one, just winning is always good obviously [laughs]. 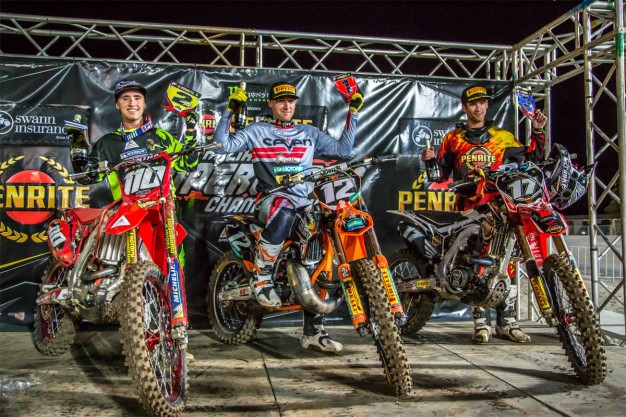 In your announcement you mentioned you may be back for supercross next year. Is that something you’re aiming toward?

It was just because I don’t want to say I’ve retired or whatnot. I know this leg isn’t going to be a quick heal and I’ve lacked a bit of support, which I think is going to be the same next year. When it’s costing you money it’s pretty hard to get to the races and race your dirt bike – especially if you’re not at 100 percent and have injuries. If my mind’s where it is right now, next year I won’t even throw my leg over a bike because I have no interest in it at all.

And what’s next? I know you have your casual brand, Twe12e, how’s that progressing?

At the moment there’s no immediate plan why I would stop the riding to do something else. That wasn’t the reason, I was just sick of being hurt. My clothing brand’s going well and now I’ll have a bit more time to focus on it. I’ve also nearly finished my fitness course as well, which is an option, plus my girlfriend is in America. I just need to sort out what I really want to do and go with that.

Well thank you for your time mate, and thanks for the memories as well. It’s been a pleasure to see you gain success on the track and also as one of the sport’s great role models.

Thanks heaps, and thank you to everybody who has done everything for me. I just can’t thank any individual person or anybody that’s helped me enough. I’m still going to be around, I can’t wait to speak to you guys soon and thanks again for the overwhelming support.