We loved it, but what did the industry think of Brisbane?

Saturday night’s finale of the Australian Supercross Championship at Brisbane Entertainment Centre saw the sport return to a tight indoor venue for the first time in seven years, complete with a solid crowd, FMX and monster truck displays and some hectic racing. In some respects it was a return to the glory days of Aussie SX and while we couldn’t stop smiling about it, we thought we’d glean the thoughts of a range of riders and industry types to get their opinions. 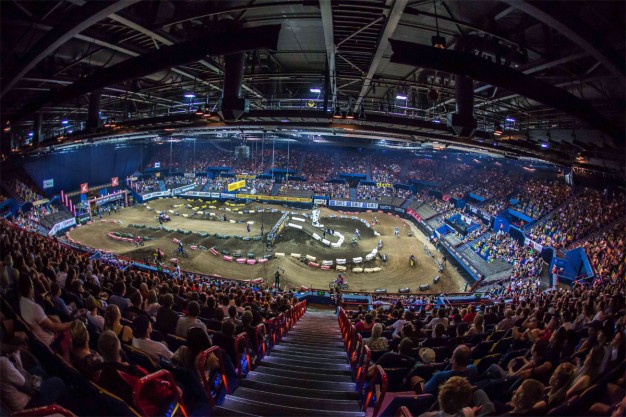 Mark Kelly – Series sponsor through Link International:
From our point of view we couldn’t be happier. We had 50 people from Link International there to enjoy the show and they’re all still talking about it. Pirelli won every championship and the signage was fantastic, although the large drop-down banners probably blocked a bit of the view for a few spectators. I think every round needs to be indoors for supercross. The atmosphere is so much better, people connect with the sport more than at an outdoor track and the noise is awesome. The engines get people excited, and you can hear the crowd respond to passes and crashes through the race. We’re very happy with how the series ran and it’s exciting to see the improvements from last year to this year. Full Throttle Sports delivered on all their promises to us and you can’t ask for much more than that.

Adam Monea – SX1 series runner-up:
Saturday night’s race was exactly how I remembered indoor racing to be. The track was so tight, with a fairly simple layout. We last rode indoors on 125cc and 250cc two-strokes, and I think our bikes these days are too powerful for such small tracks. I guess the racing was good as everyone was so close, but you end up defending the inside line, because otherwise someone will dive-bomb you. I love racing and I think Saturday night had a great outcome, but I want big supercross tracks. If we want the sport to grow we need better tracks; if any extremely rich people read this, please build a big stadium for supercross! I thought Yarrive put on a great series and I admire him for putting his balls on the line to do it, plus he actually pays prize money. All in all, the event was okay and what I thought it would be, but I think the indoor races should be kept to a minimum.

Brock McLeary – Indoor racing debutant:
People told me it’d be tight and technical and to be prepared for some bar-banging. I didn’t think too much of it, but the track was definitely tighter than I expected. When I first walked onto the track I couldn’t stop smiling and all I could say was “wow”. It was definitely cool to look up above you and see seats and lights. The stadium atmosphere was unreal. My racing didn’t go to plan and I had the worst finish of the season, but I think one of the biggest disappointments was that us riders and mechanics couldn’t watch the racing from anywhere. We all expected there to be some bleachers or seats for us to watch between our races, but there was nothing. There was a little platform we could jump up on, but we weren’t allowed there while the racing was on. I’d definitely like to see more indoor races in the future. The atmosphere and hype was better than any supercross this year; I was excited all night and it was a fun event to be a part of. 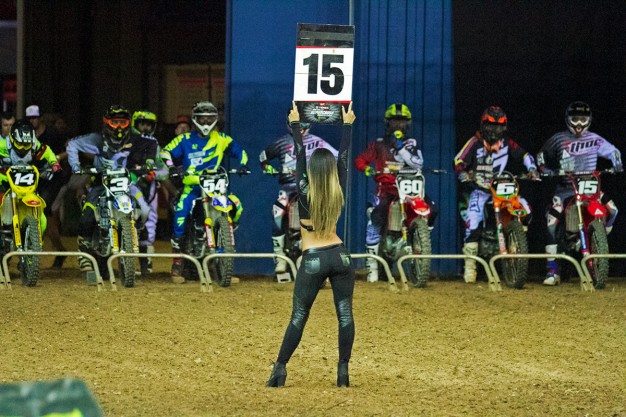 Troy Carroll – NPS Monster Kawasaki team manager:
I thought it was fantastic. The racing was great, the atmosphere of having 7500 spectators was good and to be honest I couldn’t find a negative all night. When you go to outdoor stadiums and showgrounds the weather is a massive element. Indoors the conditions and track don’t change, it’s well-lit and the spectators are looking straight onto the track. Yeah it’s not the US with open tracks and their whole infrastructure with pits, but we’ve tried that in Australia and it doesn’t work. Yarrive Konsky bringing it indoors was great and I hope we see more of it in years to come. Some people said the track layout was too simple, but they have to remember that we’re trying to cater for the amateurs too. If we don’t do that for the young guys we’ll never see another Chad Reed, Brett Metcalfe or Dean Ferris come out of Australia. I think this is just what the sport needs here and everyone involved did a great job.

Kyle Peters – Wilson’s MX American import:
Brisbane was a good experience for sure, but it was definitely a lot different to what I’ve ever raced. The track held up better than any other track this year, everything ran smoothly, and the spectators came out, which was awesome. The short motos meant endurance wasn’t an issue and I tried to get out and ride as hard as I could, but I found myself over-riding the track too much and crashing. The difference between lap times was so small, and I got bitten a few times trying to push too hard. Some people asked if this was similar to our Arenacross series at home, but even that’s bigger than what Brisbane was. Arenacross has big whoops and solid rhythm sections, but Saturday’s track was pretty basic. It was awesome how close the crowd was, though. I’m definitely not used to that and you could really hear them while you were riding.

Matt Moss – Dual SX1 champion:
I think it was the best thing that supercross could do. It’s been on a downer, so it’s good to go back to the grassroots of racing in Australia and it was great for the sport. The atmosphere was as good as it’s ever been – you look from one side of the stadium to the other and there are people everywhere. They are engaged watching us from that perspective and they get into it a lot more than other events. Supercross this year was a success for Yarrive, some people put him down, but this year he delivered and I wasn’t disappointed at one point during the series. I’m pretty pumped, especially going indoors again. I wouldn’t want every race indoors, but when we do there’s definitely some good racing.