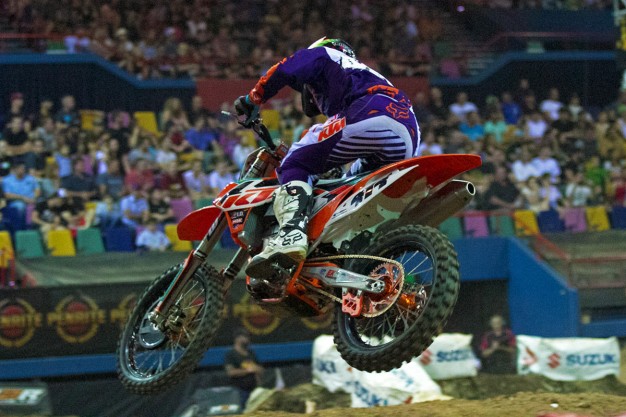 Matt Moss (Team Motul Suzuki) – 1st overall:
I was stuck back in the pack with five or so laps gone by and I wasn’t really feeling it at that point. But the guys at the front didn’t seem to be getting away and I got going there in the middle of the race and I’m glad I did. I was able to pick them off and get the win, which made for the perfect season. I’m just really thankful to everybody at Team Motul Suzuki, all of our supporters and the people that help make this happen. We go racing for a lot of reasons, but to win and reward everybody involved in that way is the best feeling. It’s been an amazing year for everybody involved and the RM-Z450 delivered everything we asked of it the whole way.

Lawson Bopping (Team Motul Suzuki) – 7th overall:
Brisbane was a difficult round for me in the end, the track was really tight and didn’t completely suit me, but I am happy to finish on the podium in the championship. We’ve come a long way this year and Team Motul Suzuki has been right behind me the whole way in supercross, so thank you to them and all of our sponsors.

Adam Monea (NPS Monster Energy Kawasaki) – 2nd overall:
I’m pleased with the speed I had. I feel I was on par with Matt but I made the rookie error of holding my breath on the tight track and tried to sprint away. I built up a bit of a buffer and then when I realised on lap 15 or 16 that I was holding my breath I hit a wall and Matt caught me so the last five laps of the race were terrible, but the first 15 were good. Matt was on the charge, but I had his pace. Seeing as Matt had sealed the championship win the round before, second place was what I went out there to get and I got the job done so all things considering, it was a good result.

Kirk Gibbs (KTM Motocross Racing Team) – 8th overall:
The night started off pretty well and I got some good starts, which is something I’ve been working on pretty hard. I got to heat wins and first gate pick for the final so that was pretty good. I got a good start in the final and was like third or fourth, but I made a little mistake, and Jesse got past me, and then he made a little mistake, and pulled up a little bit, and then Marmont got up the inside of me, put a move on and sort of put us both down, so it put a dampener on things. I fought from there and I felt I had pretty good pace going, but it is what it is, we sort of knew it was going to happen if the opportunity was there and unfortunately I was on the wrong end of it. I’m really happy with the way I’m riding now and it’s good to be uninjured at the end of the professional season for the first time in about five years!

Jesse Dobson (KTM Motocross Racing Team) – 5th overall:
Well it was what I said, punt or be punted! I had to do a little bit of it, but I tried to be nice about it at the same time. I just scraped through for the main I think, and I got off to an okay start but it took me a bit to get into my groove, then about halfway through I started hitting my lines. Then I stalled it and it took me a bit to get the bike going when I was in third place, so that kind of set me back a little bit. I think I dropped back to seventh, but once I got the bike going I made it back up to fifth. So it was the best result yet, and every round we’ve been improving, so that’s what I’m happy about. I’m really happy about finishing fifth in the championship too, that’s awesome!

Jay Marmont (Penrite Honda) – 12th overall:
That definitely wasn’t the way I wanted to bow out. It was an up and down night but that is just the way it goes. I had a ball racing this series, I was on the podium and it was great to see so much support for the championship. It is confirmed that I am retiring but I will not be leaving the sport all together.

Josh Cachia (Husqvarna Motocross Racing Team) – 6th overall:
It was good fun and a good result to end the supercross season with. I got a third and a win in my heats, and was feeling very confident going into the final. I got a good start in the final, but over-jumped a triple and tweaked my wrist, so that kind held me back. I came into this round wanting to go up a couple of places in the championship, and that’s exactly what I’ve done so I’m pretty happy. My previous indoor experience was useful here, just dealing with the conditions that other riders might not have seen before, how the track is going to turn out, or what kind of lines you need to cover, you’ve got to tweak your riding style a little bit. Ando has been great. He’s only asked 110 percent of me, but he doesn’t care if I come last or whatever and he’s been happy with me every round. Gavin Faith (Penrite Honda) – 2nd overall:
I’m super-pumped to wrap it up for Penrite Honda and for all the fans who came out tonight. Last year was pretty rough for both myself and the team. I learnt a lot and bought it into this year. I felt like I rode a lot smarter this year. I will head to Germany now to do the four-round German series before returning the USA for the AMA Supercross Championship. This is a fantastic championship and I will definitely be back with the team next year.

Luke Arbon (SD3 Husqvarna) – 12th overall:
I started off well and felt good on the new four stroke. We made a gearing change in practice and that made it awesome. In my heats I got two holeshots, two wins, and had the fastest times, so I felt really good going into the final. I was sitting third in the final, and got promoted to second behind Doggy when Faith crashed. But then I made a mistake in a rhythm section, hit my head on the handlebars and then couldn’t really see coming into a turn. I went over the berm and landed on the concrete on my hands. It was an awkward crash and I sort of crushed my hand and hit my head and shoulder pretty hard so I just walked off and got checked out by RACESAFE, but I don’t think anything is broken, I’m just a little sore and tender.

Ryan Marmont (Husqvarna Motocross Racing Team) – 6th overall:
I was able to call on plenty of experience from over years of indoor races – I had a game plan, that was obviously to qualify good, ride good heats and get good results, earn a good gate pick on the inside for the main. Unfortunately, I didn’t do any of that. I got terrible starts, put myself in bad positions, had crashes in heats, ended up in the LCQ and got the last gate pick so it couldn’t have gone any worse! Then in the main, I just about pulled the holeshot from gate 12 – which was a neat enough trick on its own – got to the lead, and unfortunately just had a little slip up when I hit what I think was a rock on the way into a turn. I went down unexpectedly and so fast I didn’t even get to put my hands out. But I got back up, and rode a solid second half and I’m happy that I finished the season riding the way I wanted to ride, it’s just a shame it didn’t show in the results as much as it should have.

Kyle Peters (Wilson’s MX Honda) – 8th overall:
The past weekend wasn’t the greatest day of racing I’ve ever had that’s for sure. It wasn’t anything like I had rode back home so it was a tough weekend for me. I went into the weekend ready to challenge Gavin for the win so I was pretty disappointed to have the crashes that I had on the weekend. I definitely wanted to win but to come out safe and with a third spot on the podium was still pretty cool. I can’t thank everyone enough for the support and help that I have had to get me to where I am. The Wilson MX crew are awesome and I really couldn’t have asked for anything better. I love those guys and Australia so I can’t wait to come back.

Luke Wilson (Wilson’s MX Honda) – 9th overall:
I was so happy with my result on the weekend. I have to admit; I was definitely stressed about it all week thinking about getting into a 12 gate main though. I ended up not having to go to the LCQ and got a third in one of my heats and went straight through so I was pumped with that. I was a bit shocked with my performance, but it was pretty special because my partner, my family and my friends were all there to see it. It was really good to finish this year on a high. It always seems to be something I do, I get better as the year progresses, but it was awesome to finish it off the way it did on the weekend. The bikes haven’t missed a beat this year, and it’s a testament to the product that Honda have provided the team with so I have to give a huge thanks to them for the support. Big thanks also goes to my fiancé Sam and my family for the whole year, it’s been an awesome journey.

Jake Williams (Wilson’s MX Honda) – 17th overall:
The weekend was really fun for me, although I didn’t get into the main, the atmosphere was awesome and pretty cool to be a part of. I had a killer mechanic [laughs], dad made sure there was fuel in the bike and we had a lot of fun together. I had a fair bit of bad luck and both Kyle [Peters] and I did a fair bit of soil testing on the weekend. I didn’t really get the result I wanted on the weekend, but I have to thank the Wilson guys for giving me the opportunity to race the series. We have had awesome equipment and support so can’t thank the team enough.

Dylan Wills (KTM Newcastle) – 1st overall:
It was good to battle with the KTM boys, we dominated all championship so I’m super-stoked to see KTM doing well. It was good all year racing with Jack and Brock, I knew we could race cleanly and at a mature level so I was stoked to be able to race those guys, and come out on top.