Team Motul Suzuki’s Matt Moss is tearing up the Australian record books one chapter at a time. By winning the 2014 Australian Supercross Championship at Brisbane on Saturday night, Mossy has won four 450 titles in two years. With stats like that, it’s little wonder Moss couldn’t stop smiling after parking his bike in the pits following his final come-from-behind win. We caught up with the back-to-back champ before he’d even unclipped his boots to find out how he’s feeling. 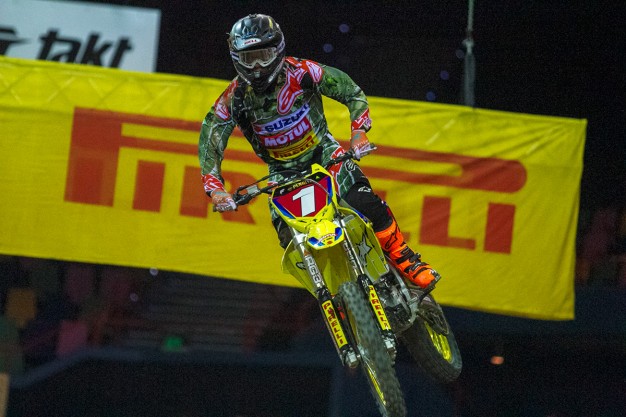 Dude, that’s a pretty big smile you’re sporting right now. Would winning four straight 450 titles have anything to do with that?

[Laughs] just a little bit! It’s pretty cool to defend my supercross championship and to put in the perfect season is a real bonus. I’m just happy to finish the season and get the job done. It was a little weird winning the championship prior to going out for the last race. I was sort of content with where I was in the Main – I think I was in about 10th or something – and the hammer hit that ‘nah you’re better than that’ and I just went for it. It was a little bittersweet as this year I’d won every single lap of every single main up until tonight, so people were sorta questioning my ability to come from behind and win. I proved them wrong, and to do it at the last round is a bit of icing on the cake. The whole team and everyone behind me, it’s been a great, great year, but we’ve still got plenty more to do this year.

Yeah, what’s this I hear about you heading to the Bercy Supercross?

Yep, I head off on Tuesday to race Bercy, then we go to Italy. Suzuki and Alpinestars have worked it all out and I’m really excited for that opportunity. It’s always good to check out other parts of the world and it’s going to be fun racing over there.

Well the track tonight would’ve been a good testing ground, with how tight it was. Was it tighter than you expected?

I think it looked tighter in pictures, but the track held up really well. It’s been a while since we’ve had an indoor race and I’m sure it’s the first time that this crew has built a track indoors. It’ll only get better and better, but the atmosphere inside is completely different. I don’t know about you, but it felt like a real supercross tonight. It’s completely different and the crowd were into it because they’re all confined looking at each other and nothing is taking their attention away from us guys in the centre all going for it. It’s pretty cool. How were the nerves today?

I wasn’t as nervous as I thought I’d be at the start, but when I broke something in the first race and had to switch to my second bike, and I put the weaker tubes in my bike because I’d pinched a couple earlier in the day, I was nervous about getting a flat in that second heat. But as soon as that Main started I just sort of went out and wanted to get it over and done with.

So what’s happening next year? Are you looking to race the first six rounds of the AMA Supercross again?

I’d really like to. My brother Jake and Adam Monea are heading over there next year and have someone backing them and helping them out financially to do that. I’m still looking for someone to jump on board and help me do the same. I’m getting married in February too, so financially things are looking a little too tight to try and do it all off my own bat. If the opportunity arises though, I’ll definitely jump at it.

How does a February wedding fit into any supercross plans?

I’ll hopefully finish a week before my wedding and fly straight back for it on February 13. My fiancée is a great chick and she understands that this is a short career and we need to make our money while we can. She doesn’t bust my balls about anything. We’ll want to have kids and stuff soon, but we’ll wait until the time’s right – I’m in the peak of my career and I want to finish racing and achieve everything I can before I move onto that chapter.

For sure, mate. Well, all the best for Bercy. Have fun over there.

Thanks mate. Will do!