After two years of toughing it out as a privateer in the American Eastern Regional 250SX Championship, the 24-year-old Melbournite is now finding himself claiming podium positions in the 2014 Australian Supercross Championship.

Potter, who has always been a supercross specialist since he was a junior (he won two 85cc national supercross titles) got into racing when he jumped on a family friend’s Z50 when he was 10. Potter was hooked and soon progressed to a KX60 and proceeded to rack up Victorian MX titles. However once he discovered supercross, Potter found his niche.

“I’ve always been good at it and I’ve always had good timing on jumps,” Potter explains. “I definitely see myself as a specialist supercross rider.”

Once he finished school, Potter knuckled down for five years and completed his apprenticeship as an electrician. He never let go of his dreams of riding full-time though: throughout his apprenticeship he saved his butt off in order to live his dream of racing in the American Supercross Championship.

His fulltime work meant he had to put his career aspirations on hold and be content with top 10 race results at a domestic level, while focusing on the bigger picture of racing in the States. 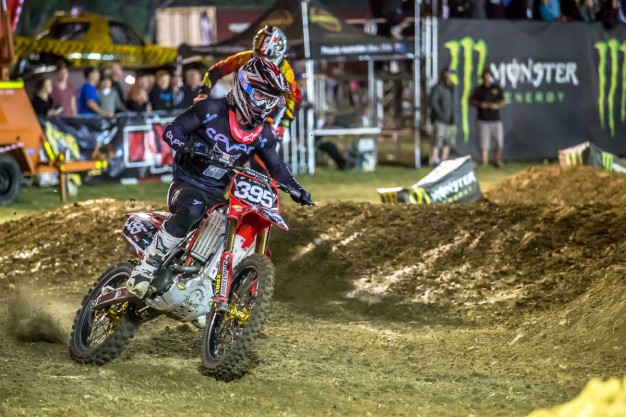 “My aim was to always get my apprenticeship so I have something to fall back on later in life, but racing is what I wanted to be doing,” Potter continues. “What I saved up from my apprenticeship funded my two years of racing in the States.”

Potter was in for a rude shock once he got to the US last year. On a standard Honda with stock suspension operating out of the back of a van, the friendly Victorian failed to make any main events and spent a lot of money setting himself up.

“The first year was really tough, but I started to find my feet towards the end of the series,” Potter relfects. “This year was a lot better. I had a better machine and suspension and I rode myself into form and made three finals. There were still some complications along the way, but it was awesome to see the progress.”

His best result was a 17th at Toronto, but he finished the series in 19th in Vegas, despite being badly dehydrated from the scorching temperatures.

With his apprenticeship money dried up, but a head-full of memories and a smile on his face, Potter returned to Australia and began working hard for the upcoming Australian Supercross Championship.

After coming close to podium positions last year and aiming for top fives, this year Potter set his sights higher this year to battle for podiums at each round. He’s succeeded so far, with a second at Bathurst and a third at round four at Phillip Island.

With one round remaining he’s in fourth position, but just three points adrift of Brenden Harrison and well in contention for a series podium.

“That was a real bummer to crash, but I’m really happy with my progress this year,” he says. “It’s encouraging to see the improvements in my results and speed from 2013, and I think the final round indoors is going to suit me to the ground. 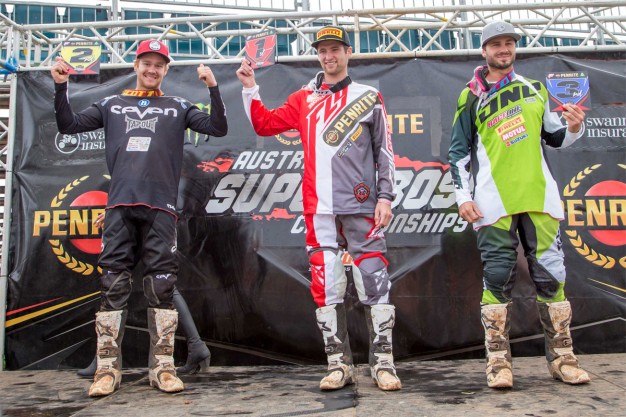 “All of the east coast supercross rounds are really tight compared to the west coast, so I’m expecting to do well there. Gavin [Faith] races the east coast too, so he’ll also be hard to beat at Brisbane I think.”

Once the Australian championship wraps up Taylor’s main priority is get back to the US for another lash at the AMA SX. Funds, though – or a lack thereof – are a challenge.

“The money-tree has dried up, so we’re trying to get some help with funding at the moment,” he explains. “This will be my cheapest and easiest year though – everything is set up and I still own my Chevy van over there. I’m working as much as I can to earn money, but we still need some help.”

Taylor is also trying to work the budget to bring a mechanic mate of his on board, in order to ease the workload.

“Last year I’d finish riding at 4:00pm, then by the time I’d wash the bike, give it a service and work on getting the race bike ready for next weekend it’d be 10pm and I wouldn’t have eaten dinner. Having someone to look after that side of things will be a huge help.”

If he does get back Stateside, Potter will be looking to qualify for every main by the middle part of the championship and pushing for top 10s when the gate drops in the final.