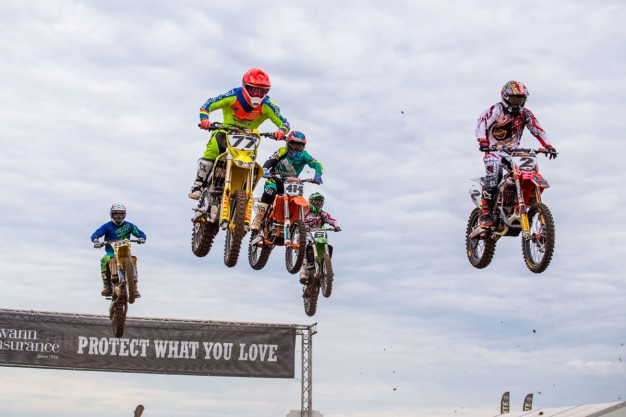 Matt Moss (Team Motul Suzuki) – 1-1 results:
It was great to win both main events after overcoming some dramas in the Sunday heats, but I’m just happy with the way we are going at the moment. When you have the mindset of wanting to finish on the podium, it seems to make winning come easier for me. That’s what I did – I just found myself in front and led from there. Team Motul Suzuki had a great result on Saturday with Boppo and I in 1-2, so it’s really positive to deliver for the team and all of our sponsors on the 2015 model RM-Z450. It’s been a great series for all of us so far and I can’t wait for the indoor event at Brisbane.

Lawson Bopping (Team Motul Suzuki) – 2-4 results:
The weekend was good for us and another step in the right direction. Saturday was awesome, I won both my heats and finished second to Matt in the final, so it was a perfect day for Team Motul Suzuki. Sunday wasn’t quite as good for me. I finished second in heat one and won my second heat, which qualified me first, but then in the final I was involved in a first turn pile-up and had to work my way back to fourth by the finish of the race. I was happy with how I rode though, the 2015 RM-Z450 was great all weekend and now we are tied second in the series, so it will be a tight finish at Brisbane’s final round next month. I just have to keep pushing and the results should come.

Adam Monea (NPS Monster Energy Kawasaki) 4-5 results:
It’s a real bummer getting these little injuries. I still feel like I could have been on the podium on Sunday but I was brought down in the first turn crash that left a lot of the field on the ground. It was hard to come back from there. I’m unsatisfied with the results because I feel like I’m a genuine contender for race wins. I need to heal up as best I can and I’ll be in Brisbane to try and finish as best I can.

Kirk Gibbs (KTM Motocross Racing Team) – 4-3 results:
The track was really skatey and most of the passing that was done seemed to involve a lot of bumping or somebody being taken out. I tried to be nice and give people room, but most people had different ideas. First night I got up into third and then Jake Moss didn’t give me any room and put me into the hay bales. I got back to fifth that night which is pretty disappointing because I came from a fair way back. Today there were probably a few little things I could have done a bit better but, taking only my third ever Supercross podium is okay, since it’s all still pretty new to me. I feel like I should be a podium guy every week now, and it’s pretty crazy to be able to say that after a few short years.

Jesse Dobson (KTM Motocross Racing Team) – 6-6 results:
This weekend it was really slippery, so you had to just be really patient and respect the track and the power of the 450. And if you did that you kept it on two wheels and got a solid result. Coming out with two sixths for this weekend is pretty good. I had some bad starts and some good starts, and it feels like I belong in the class now, so that’s good.

Jay Marmont (Penrite Honda) – 3-2 results:
I was very happy with the weekend. I wasn’t the fastest out there but I made it work. In both finals I really had to work for it but I came through and it was good to get back on the podium. We have made up a lot of ground and now I am little over 14 points shy of second place. Matt will be riding for the championship in Brisbane so my plan is to go and take it to him, to see if we can secure a top three finish.

Josh Cachia (Husqvarna Motocross Racing Team) – 8-9 results:
It was a really hairy round with the track being so hard-packed. I was struggling to get my setup right, but I told my team owner Craig [Anderson] and Danny Apro what I was feeling and they got it sorted for me. Today in my final, I got a really good jump, but then a lot of crap went on behind me and I got rear-ended into the first corner and went down. I picked up as quick as I could, and just tried to make some points. I’m pretty excited to be eighth and see how many of those guys I can knock off at the next round. Gavin Faith (Penrite Honda) – 1-1 results:
It was a really good weekend. I got out in second today and worked my way past Hayden [Mellross] then rode my own race from there. We head into the final round of the series with a good points buffer but it is by no means a done deal. I am looking forward to racing in Brisbane it will be my first indoor race in Australia.

Brenden Harrison (Instant Security KTM) – 5-8 results:
On Saturday I got taken out by a slower ride and hyperextended my thumb. I rode to fifth in the final, then got a flat in the final tonight. I felt it on the first lap when I nearly crashed and when I checked it afterwards it was down to 3 psi. It’s frustrating, really, really, really frustrating, especially when they were things that were out of my control, but that’s motorsport.

Luke Arbon (SD3 Husqvarna) – 7-5 results:
Yesterday in the main I went for a big move up the inside of the pack because I had a terrible start and I would have probably come out second, but someone clipped my wheel and spun me backwards. I came from around 13th back to seventh. Then today I felt really good in qualifying but towards the end I jarred my back so had a really sore back through the day. In the final I was fourth for most of it, but then just felt a little tired, from the back and everything that was aching and I fell back to fifth, which wasn’t too bad.

Ryan Marmont (Husqvarna Motocross Racing Team) – 6-7 results:
I’m disappointed to see my [Phillip Island] podium streak come to an end, I really wanted to keep that going but I did what I could. I’ve improved a couple of places over Bathurst which is good, but obviously I wanted more.

Nick Sutherland (Raceline Pirelli Suzuki):
It was during qualifying Saturday morning, I was going for my first hot lap and I caught my leg in the corner after going across the start line – I twisted in sideways. I tried going for another hot lap and did the same thing again in the same corner. I ended up just quitting on the rest of qualifying and tried to get sorted for the heats. I got my knee heavily taped from the guys at RACESAFE and I had no dramas in the first heat, apart from my tip-over. I had another good start in heat two and the corner after the triple I grabbed my foot again and that was the last straw.

Jack Simpson (Tunetech Racing KTM) – 2-1 results:
I got second last night and first tonight overall. I’m very pleased with that, just knowing that I was definitely the fastest on the track, and was able to push through and pass all the dudes I’m racing for the championship and pull away and win the race. It was a good experience, I was riding well, and the bike was working well. Loved being at the GP with all the atmosphere too.”