Penrite Oil Honda Racing’s Gavin Faith has again established himself as favourite to capture his second SX2 title in the Australian Supercross Championship after winning three of the four rounds of the series so far. With just one round remaining and an 18-point margin over his fellow countryman Kyle Peters, Faith is on the cusp of winning the series for the first time since 2012. MotoOnline.com.au caught up with the 22-year-old MTF rider to find out how it’s all shaking out. Great ride again on the weekend, Gavin. You’re definitely in the driver’s seat of this championship now with only one round left to run.

Yeah I have an 18-point lead now so as long as I ride smart, hopefully I can wrap it up in a few weeks’ time. The series got off to a bit of a slow start for me at Bathurst. I holeshot the first race but cased a jump on the first lap and crashed. I worked my way up to third and was happy to get on the podium, but I was bummed to start the season like that. Since then, though, I’ve been able to maintain a solid, consistent pace and win the next three rounds.

Here’s a crazy little piece of trivia: you’re the only SX2 rider to have ever won at Phillip Island and have now chalked up five wins from five rounds there. What is it about the Island that makes you so hard to beat?

I don’t really know! There’s always a cool atmosphere there with the MotoGP being held at the same time and the track itself is quite technical. It’s hard pack and can get slippery, but I think it definitely helps having a good history there. I didn’t put pressure on myself to win, but I just went out and did my thing. On Saturday I got a fifth-place start and picked off the guys in front, then got into the lead and pulled a little gap to the checkers. On Sunday I started second behind Hayden Mellross and I got by him within a couple of laps. From there I just tried to maintain the gap, ride smart and not ride over my head.

How is the level of competition this year compared to the past two years you’ve contested the championship?

It’s right on par with the past two years, I think. The biggest difference for myself is that I’m making better decisions on the track and I’m not trying to win the race on the first lap. I’m a smarter rider now and I can put myself into a better position to fight for race wins. One of the things I have noticed this year is the increase in two-strokes out there racing – the guys are hauling butt on those things! They’re tough to beat off the line, but my mechanic Mike Landman and the whole Penrite Oil Honda team have built me a really good bike that’s just as fast as them. 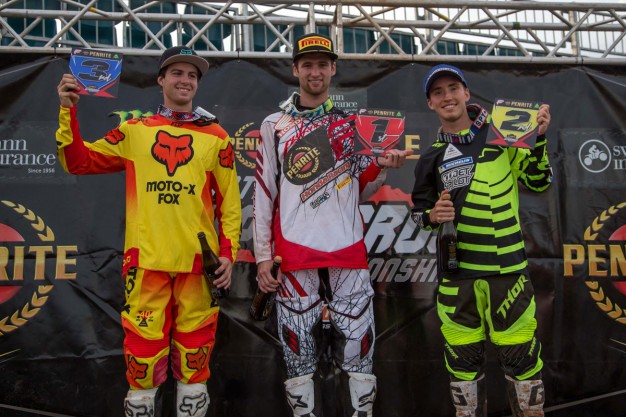 So far we’ve seen two double-header events. What do you think of that format? Do you find it tough having to make your mind and body turn up two nights in a row?

I’m kinda used to it now after racing in Germany, where they have a similar format. One weekend they even had a triple-header. On the second day you wake up a bit sore and tired, but I’ve been training hard back home at MTF and my fitness is good at the moment. I’ll be doing the German championship again this year too, as a build-up to the American Supercross Championship. The first round is a week after the Brisbane round and I’m really looking forward to it.

So you use the Australian and German championships to give you a boost heading into the AMA Supercross Championship?

Definitely. I started training in August this year and that means I’ve had a lot of supercross track-time before the American series starts. I see it as a real advantage to get as much race time and experience before the gate drops on the East Coast championship. Last year I struggled with a virus and pulled out early in the season with fatigue, but I took the summer off to regroup and I’m feeling better than ever right now. Supercross last year was disappointing, but I’m ready to move forward and have a good showing in 2015.

Well if you carry this form into the States, you’ll be tough to beat. Thanks for the chat and we’ll see you at Brisbane.

Thanks a lot. I appreciate it.