The Yamaha YZ250 two-stroke has long been known as one of those models that just worked. Its chassis design, engine and suspension package has been basically untouched since 2005, but that is until now.

For 2015 Yamaha went ahead and revamped their two-stroke range; the 250, 125 and their 85 for the younger crew. Here are MotoOnline we were stoked when the news broke, it’s something that Yamaha needed to do with the European manufacturers still updating their pre-mix machines.

First thing’s first, the looks of the bike, this is definitely the first thing you will notice when casting your eyes over the new 2015 Yamaha YZ250 – it looks quite different! Yamaha have used aggressive, modern styling for 2015, updating everything except for the fuel tank.

The overall look of the bike is more streamline and super modern, the side number plates are probably the most noticeable change, no longer do you have huge billboard sized plastics hanging off the side of your bike. 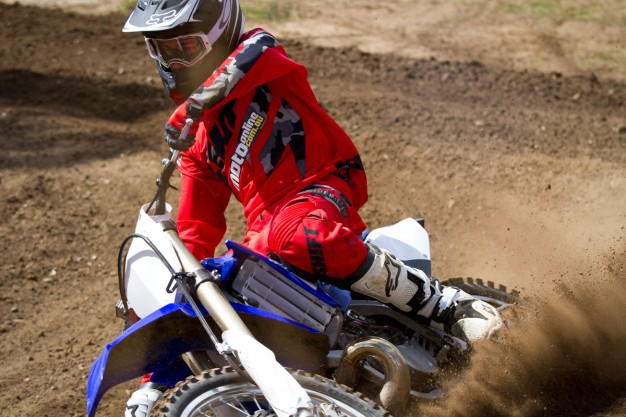 Apart from looking great, it also feels great. Neither myself or fellow MotoOnline test rider, Dylan Wills, found our boots getting caught on any of the plastics and it was a comfortable ride. It could have easily gone very badly, but Yamaha have nailed it with this bodywork update.

Obviously sitting on the Yamaha YZ250 you will feel that you sit slightly lower into the bike, the seat isn’t as flat as their current four-stroke models, but once you adapt to that feeling the bike feels great. Ergonomically, this is one of my favourite bikes on the market, no doubt about it.

Now apart from the updated looks that bring the bike in line with their four-stroke range, Yamaha has also brought across their 48mm speed sensitive fork for 2015, quite an exciting update when it comes to the YZ250 and YZ125 also.

Produced by KYB, the 48mm speed sensitive for uses piston speed to control damping force for super-precise handing and a plush, smooth ride. We were already huge fans of the fork on the YZ450F and YZ250F, and that’s the case for the YZ250 as well. 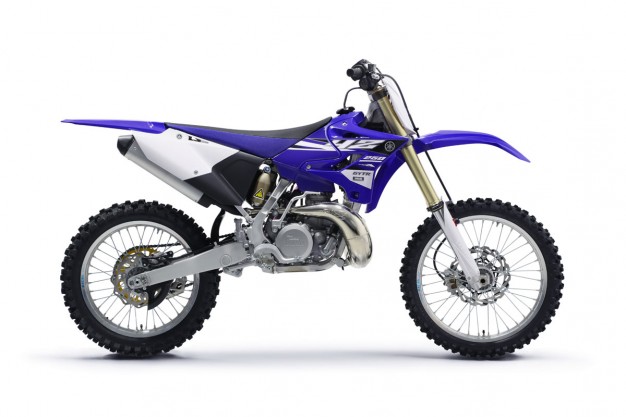 Both myself and Dylan found the fork to be very consistent and predictable. It may not be an all-new air fork with multiple chambers and more features than you can poke a stick at, but it sure does work very well.

We’re sure Yamaha will jump on the air fork bandwagon at some stage, but as usual, Yamaha have their reasons for sticking with the traditional fork design. It works great, it’s easy to use (set it up once and essentially leave it alone), and a majority of riders enjoy riding with this fork – no need to fix something that isn’t broken.

Much like the front-end of the YZ250, the KYB rear shock offers a consistent and predictable ride at all times. I may sound like a broken record, but that’s what we’re after – we want to know what the bike is going to do in all situations. Both the front and rear of the 2015 YZ250 provide just that. 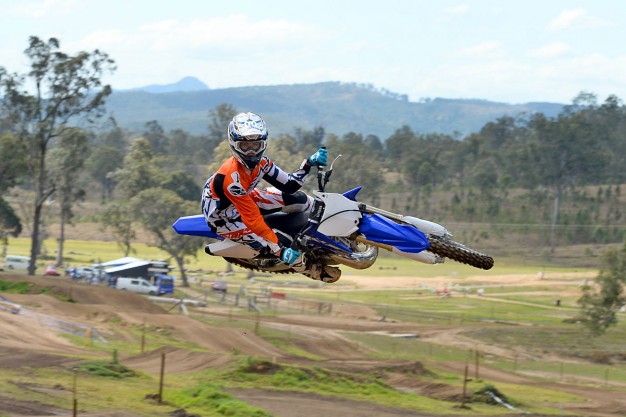 Carrying this impressive KYB suspension system is a carefully engineered, advanced aluminum frame and swingarm with a removable, lightweight aluminium rear sub-frame. This chassis has remained unchanged for years, but we’re glad Yamaha have done so. It features the perfect amount of flex and allows for a very responsive, sharp turning and stable machine. This chassis is awesome.

Luckily Yamaha have an impressive chassis and suspension combination, because the engine housed within that chassis is definitely something that demands respect. The 249cc two-stroke engine is a beast, you won’t be searching for extra power on this thing unless you’re at the highest national level.

The liquid-cooled reed valve inducted engine is lightweight, compact and features a wide and very strong powerband. Using their patented YPVS power-valve system, Yamaha has created a crisp, strong and broad range of power with tonnes of mid-to-top end.

Obviously with a two-stroke engine you’ll lack that bottom end pull that the modern four-strokes feature, but once you bring up the RPMs and find the meat of the power, you’re in for a real treat or a bad day if you don’t ride the bike correctly. 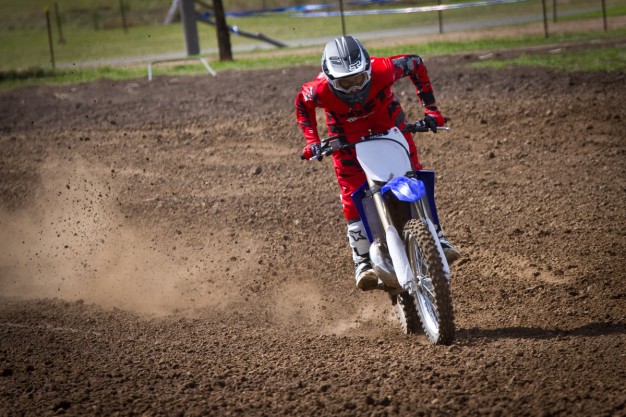 Over-revving the YZ250 is the worst thing you could do, I found that if you rode the bike in a reasonably low rev range (as low as you could go for a two-stroke), the whole chassis setup worked a lot better. If you watched Kale Makeham in the MX2 MX Nationals championship this season, you’ll know what I mean.

Dylan, who currently rides a 250cc two-stroke in the Under 19s category, also prefers to ride the YZ250 at lower revs. If you try to over-ride this bike, you’ll get tired super fast and more than likely end up on your head at some stage. Treat it correctly, and it’s really an awesome engine package!

To help bring the YZ250 to a stop, for 2015 Yamaha have added a YZ450F-style front-brake caliper and wave-style front and rear discs minimize unsprung weight and provide excellent stopping power.

The verdict? If you were already a fan of the Yamaha YZ250, you’ll absolutely love the revamped 2015 model which retails at $9,999. Round of applause to Yamaha for stepping up and bringing us an updated two-stroke range, let’s hope this is a sign of even bigger things to come.