The Honda CRF250R has long been a favourite of many riders who choose to ride a 250cc four-stroke motocross machine. Why, you ask? Honda’s reliability is well-known, their chassis set-up always seems to provide great handling characteristics and they provide an engine package that is improving year after year.

Justin Bogle rode his GEICO Honda CRF250R to the 2014 American Eastern Regional 250SX title in 2014, and an impressive 48 percent of all competitors within that series (East and West coasts) were also aboard the CRF250R.

With such a solid motorcycle for 2014, you may wonder what Honda did to improve on that base for the new year? To be honest, not a whole lot, but the changes they made were smart ones that definitely improved the bike overall. Chomping at the bit to swing a leg over the 2015 model, we hit the track at Appin in New South Wales to see how it would go.

The most noticeable change for 2015 is the addition of the Showa 49mm SFF-AIR TAC (triple air chamber) fork. We’ve seen the triple air fork coming out on a few of the other manufacturers models for 2015, but Honda’s version is slightly different and it’s the only 250 to feature them.

Honda decided to have Showa create a fork for them which eliminated the external third chamber that sits on the outside of the lower fork leg and, instead, it now sits within the fork left leg. But don’t be alarmed, the fork still works exactly the same, it just looks different. Both fellow test rider, Dylan Wills, and myself were already fans of the triple air fork, so this was definitely an exciting addition to the CRF250R. As expected, the fork performed really well. The SFF-AIR has lifted the air fork game.

You’ve got almost unlimited adjustability with the fork, and it responds very well to the slightest changes. You can really go crazy with these forks and try a plethora of settings if you know what you’re doing. And that’s key; you must have a basic understanding of their inner-workings to make the most of these forks and maintenance is essential.

The plush and progressive characteristics of the fork provide great rider feedback and a very confident feel. The front-end plants in corners and allows you to push a little bit harder than you would usually, that’s something we’re all looking for in a fork.

Apart from the welcomed addition of the triple air fork, the aluminum chassis itself remains the same for 2015. The rear shock features adjustable spring pre-load, 17-position rebound damping and compression damping adjustment separated into low-speed (13 positions) and high-speed (3.5 turns). The shock spring is also lighter and stiffer for the year 2015. 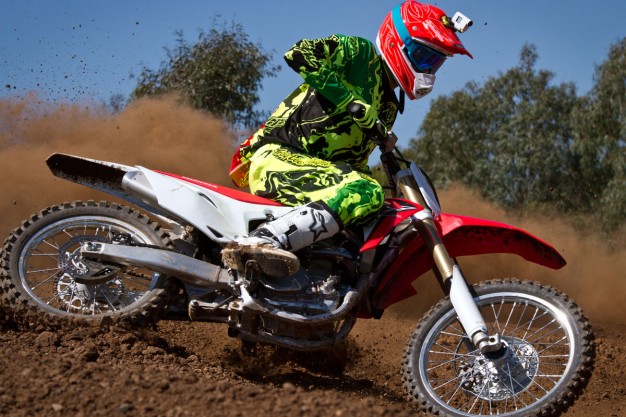 We set the sag at the start of the day and left it as is settings wise, the rear-end of the CRF250R is solid in conjunction with the new triple air fork. The bike felt very well balanced and stable through faster straights and nimble in the tight turns.

In the engine department, Honda have added quite an impressive feature for 2015. You’ve now got the option of three different maps with the push of a button on the handlebars, which is very cool. You can choose from a mellow setting, standard setting and a more aggressive setting.

I found the standard setting to be suitable to my riding style and the track conditions, whereas Dylan preferred the more aggressive setting which suits his riding style much more being a motocross and supercross racer at a national level.

Another great feature is the HRC Accessory Tuning Tool. This can be purchased and used to program custom maps actuated by the Engine Mode Select button. The possibilities are endless once you get your hands on the tuning tool; just make sure you know what you’re doing! 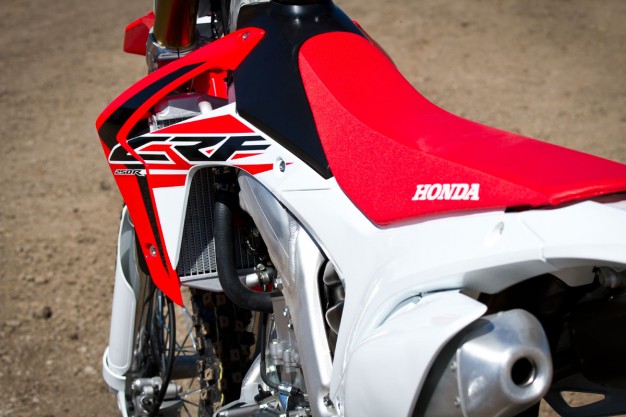 The CRF250R engine has never been at the pointy-end of the field when it comes to raw power, but Honda has been slowly building their engine package over the past few years and the 2015 is definitely another step in the right direction.

In saying that, although it’s not an absolute monster, it’s super-easy to ride and very user friendly. Almost anyone could hop on this bike and just cruise around all day, and if you felt like opening it up, there’s also ample power to do so and have a tonne of fun at the same time. For those racers that modify the motor, it’s know to respond well with great gains.

A new throttle return spring gives a lighter pull for less fatigue during long motos and new front/rear wave-style rotors help bring the bike to a stop. For 2015 a larger 260mm front rotor has been added to improve overall braking performance, something both Dylan and myself felt was necessary. 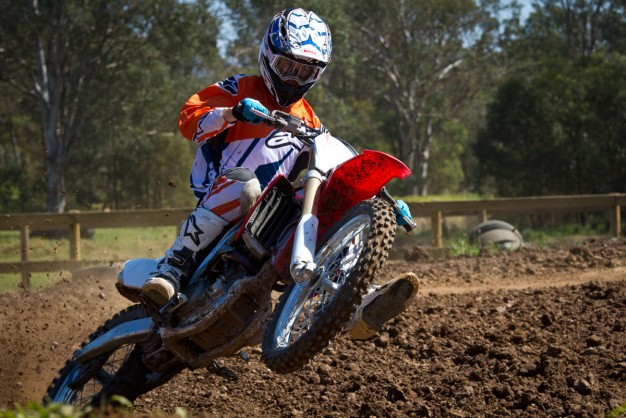 New-generation Dunlop Geomax MX52 motocross tyres are now featured front and rear right out of the box. They offer improved traction in a wide variety of terrain, it’s quite an all-round tyre which is handy if you’re not interested in changing tyres all the time to suit the track you’re riding.

Ergonomically the 2015 Honda CRF250R is on the money. The plastics blend seamlessly and the seating position is great, the stock Renthal bars are also a very comfortable and neutral bend. Both myself and Dylan felt comfortable on the bike within minutes.

To cap the bike off Honda has also added fresh new graphics to the CRF250R for 2015, they look a lot like the factory Honda graphics we’ve seen during 2014 in America. We’re a huge fan of the way this bike looks, it’s really a great looking machine from every angle!

Overall the 2015 Honda CRF250R is what we expected it to be, super-strong overall, handles great, the engine modes offer added flexibility, it features a range of impressive updates and looks awesome.

Be sure to head to your local dealer to check one out for yourself, now available for the ‘Ready to Ride’ price of $10,497. And as an introductory offer, you can have $500 Honda Dollars or finance at 1.99 percent until 30 December 2014.