Husqvarna rider speaks about his comeback in Germany.

Sitting seventh overall in the MXGP classification after round five of the FIM Motocross World Championship, Red Bull IceOne Husqvarna Factory Racing’s Todd Waters was on course to become the standout rookie in 2014. But an unfortunate training accident prior to the MXGP of The Netherlands saw the popular young Australian sidelined with a broken leg, hip and collarbone. Now with the all-clear to race again, Waters returned to racing at the final round of the ADAC German Motocross Championship. Placing a highly impressive fifth in race one, Waters is delighted to be back on track. 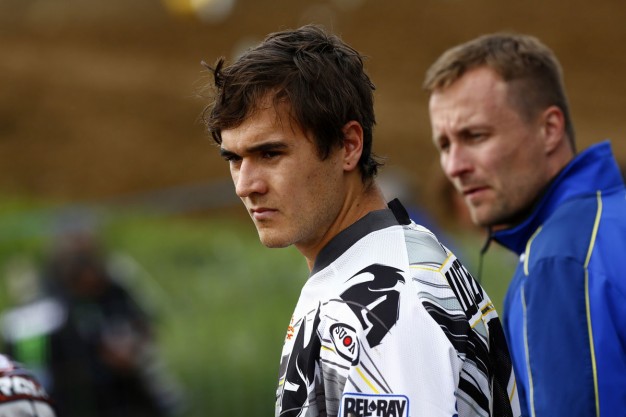 Todd, what did it feel like to finally get back behind a starting gate again?

It felt really, really good. I’m a racer – racing’s what I love to do. You can practice and train day after day but there’s no feeling in the world that beats lining up alongside 39 other riders that are all gunning for that same piece of ground in the first corner.

To finish fifth in your first race back must have been a welcome surprise. Did you have any expectations leading into the event?

We were racing with a very open mind. Honestly, the team and myself where there just to get a feel for things. They put no pressure on me to deliver a result – they just wanted me to finish both races. On Saturday I was naturally nervous and a bit rusty so I only qualified 16th. That gave me a bad gate pick but somehow I started good and was running as high as third before eventually crossing the finish line in fifth.

Rain before the second race made things difficult, how did you deal with the slippery conditions?

I like riding in the mud but up until that point I hadn’t ridden in mud for a very long time. I had done all my training on sand tracks like Lommel so it was hard to adapt. My start wasn’t so good this time and I got filled in during the first few corners. But like I said, we were just there for the practice. Getting two full motos in was the most important result for us.

When did you make the decision to return to racing?

I started back riding about four weeks ago. I had hoped to be ready a little earlier than that so I could race the final GP’s but it just didn’t work out. At 14 weeks after my injury I rode for three days but I wasn’t ready. My ankle was giving me a lot of pain so Antti Pyrhönen – my team manager – made the decision to wait. Even though I wanted to ride he could see I wasn’t ready. In hindsight I have a lot to thank him for because it was the right call to make. It’s good to know that the team have my best interests at heart. Recovery-wise what have you been doing to help your rehabilitation?

I’ve been lucky to have the support of Red Bull helping me in my recovery. During the first four weeks I spent most of my time resting and allowing the bones to heal. From there it was a matter of slowly building everything back up. Daily physio at Red Bull’s facility in Austria was interesting. They really opened up my eyes to new ways of doing things. We worked a lot on balance and building up my core strength while barefooted. It was a lot of fun.

Although you missed out on the majority of the season with injury, have you settled into European living?

Personally, that’s one of the most important things I can take away from this year. Prior to January I had no base in Europe. I was still sort of commuting between Australia and Belgium. Now I know what I’m about. I’ve got a home, a car and a life – I feel settled. I’m already excited for next year.

What are your plans for the off-season? Will you return home to Australia?

We have a little bit more training and testing to do here first. I also need to visit Red Bull for a three-day fitness assessment where we’ll work on a training program for when I return home. About the second week of October I fly back to Australia and from then until Christmas it’s about working hard to be ready for 2015.

Finally, with the Motocross of Nations taking place this weekend who‘s your money on for the win!

It’s got to be Australia. I’ll be cheering hard for those guys. It would be cool to see them on the podium!