Moments that mattered most during the 2014 season.

MotoOnline.com.au reflects on some of the pivotal moments and talking points from an eventful and thoroughly entertaining 2014 Monster Energy MX Nationals. 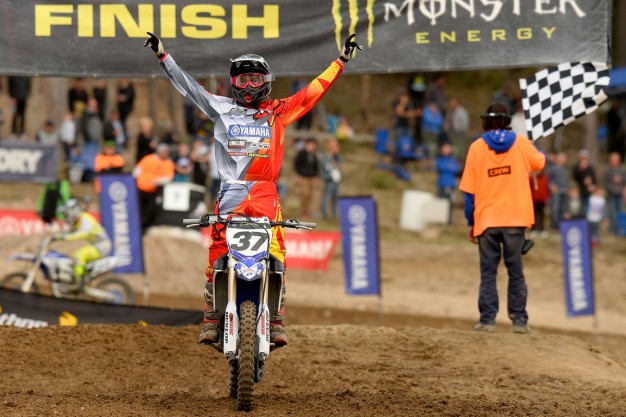 1. Matt Moss goes back-to-back:
Motul Pirelli Suzuki’s Matt Moss can do no wrong. Last year he claimed his first MX1 title, and after entering 2014 as the firm favourite, quickly embraced the status by winning the opening round at Broadford. From then on Mossy had a target on his back, but he maintained consistency and never lost the lead, despite some concerted efforts from KTM revelation Kirk Gibbs and an indomitable Billy Mackenzie.

2. Jay Marmont bows out:
The beginning of one racer’s domination has spelt the end of another, as CDR Yamaha’s multi-time motocross champion Jay Marmont announced his retirement at the Conondale round of the series. Marmont returned to his favoured CDR Yamaha team this year, hoping to replicate the astronomical success he had with the Yamaha factory team. It didn’t go to plan, and instead of trying to force the issue, Marmont has accepted that the next generation have overtaken him and bowed out of motocross racing. Then, in a surprise twist, just two days after the MX Nationals wrapped up, Jay announced he’d contest the Australian Supercross Championship for Penrite Oils Honda. He’s been quick to add though, that this will be his last hurrah.

3. Brock Winston quits Berry Sweet Husqvarna:
One of the craziest stories of 2014 went down at the Raymond Terrace round of the championship, former Berry Sweet Husqvarna Racing’s Brock Winston dramatically left the team mid-race meeting. Relationships between race team owner Craig Anderson and Winston had been icy for a while, but the straw that broke the camel’s back came when Ando made a tongue-in-cheek remark to DPH Motorsport’s Kade Mosig that he would’ve given him $100 to punt Winston off the track after the two collided in the first moto. Winston was livid when he found out, instantly quit the team between the second and third races of the day, and left the track. The Sunshine Coaster still raced the final two rounds off his own bat and finished 10th at both to also finish the series in 10th overall.

4. Townley’s still got it:
For a retired guy, former World Motocross and AMA Supercross champion Ben Townley can still turn the grips. BT raced three rounds of the MX Nationals at Wanneroo (seventh), Conondale (sixth) and Coolum (fourth on countback). However, it was his form at the final that really got people talking. In the first moto he endured – and got the better of – champion Matt Moss, then in the second he caught and passed CDR’s Billy Mackenzie to comfortably take the race win. We’ll have to wait and see if this has reignited the racing bug within the fast Kiwi, but if (and that’s a huge IF) he does turn up full-time next year, he’ll be a heavy contender.

5. Jake’s made of the Wright stuff:
It’s not often a factory team gives a young privateer a helping hand mid-season without having a spot being made available first. It’s even rarer that the privateer steps up and takes race wins, Super Poles and two podiums out of four rounds, but that’s exactly what happened for Toowoomba’s Jacob Wright (pictured at top) when he was picked up by CDR Yamaha. The 19-year-old’s ability to grab the bull by the horns earned him a full-time contract with CDR for next year. It proves just how much talent there is among the privateers and what any one of them could achieve if they’re given a legitimate opportunity to stand up and given the right tools for the job. 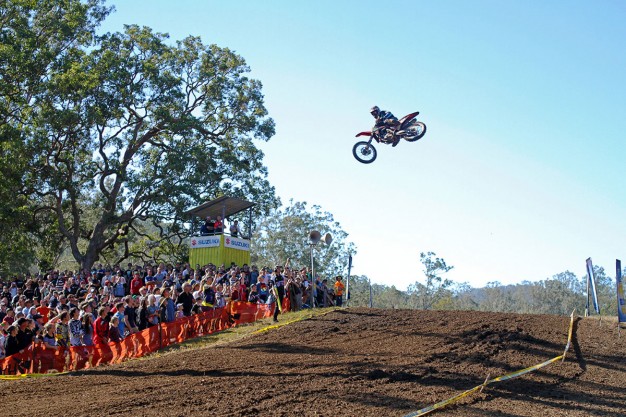 6. Clout holds off the two-strokes:
2014 saw the whole two-stroke vs four-stroke debate erupt and it seemed everyone had a different opinion on whether it was good for the sport or what – if anything – should be done about it. Despite all the hullabaloo, Serco Yamaha’s Luke Clout lived up to his billing as a title favourite by holding the hungry two-stroke racers at bay and putting Yamaha’s YZ250F on top of the box. It wasn’t the prettiest campaign we’ve ever seen, with no small amount of inconsistency both from Clout and his nearest competitors, but at the end of the day the history-books will show who won the red plate and not get bogged down in the details.

7. The MX2 privateer resurgence:
The resurgence of privateers riding two-strokes in the MX2 class threw the entire field upside-down and gave it a good shake this year. Whereas only a handful of riders turned up on the dingers last year, 2014 saw a huge increase in the number of two-strokes as privateers opted for the more cost-effective machines that produce more horsepower. Among the guys who really made a fist of it this year was 2013 MXD champ Hamish Harwood, South Australian Luke Arbon and FNQ’s Caleb Ward. But the real telling factor of the two-stroke’s new rise if popularity is looking at the championship standings: only two of the championship’s top 10 (Serco’s Luke Clout and Jay Wilson) contested on four-strokes.

8. Josh Cachia’s blow-up:
At the final round at Coolum, MX2 racers Dylan Petersen and Penrite Oil Honda Racing’s Josh Cachia exchanged more than phone numbers and pleasantries on the start-line of the opening moto (the altercation cost them both $1000 each from MA). Cachia was one very pissed-off cat, and after the race he returned to the pits, exchanged some words with team boss Yarrive Konsky, packed his gearbag, threw it over the pit fence into the car park and left the track for the day.

9. Long’s whips over Dunk’s Hill:
The huge Dunk’s Hill (aka Drunk’s Hill) jump that graced this year’s Conondale circuit attracted more social media exposure than any other aspect of the entire 2014 championship. It was a huge 100-footer with a blind take-off and a down ramp about as long as your forearm, but that didn’t stop the likes of Dylan Long (pictured above) from repetitively throwing his bike sideways and upside down over it. Long might’ve only finished the day in ninth overall in MX2, but he certainly converted more fans than any other rider in the pits. On a side note, surely the Drunk’s Hill jump and the exposure it generated is more than enough evidence that we desperately need more features like this in Australian motocross.

10. The MXD four-way stoush:
As always the MXD championship threw up some of the year’s best racing, with Egan Mastin. Jed Beaton, Nathan Crawford and Jack Simpson trading wins, paint and points positions all season long. The eventual champ, Mastin, was handed a decent lifeline right at the end of the series when the then leader Beaton snapped his fibula while riding in Victoria, but that doesn’t take away from the fact that he was arguably the most consistent rider all year.