KTM Enduro Racing Team’s Toby Price has broken new ground in Australia by claiming his fourth Australian Off-Road Championship at Heathcote, VIC, over the weekend. On top of that, the 27-year-old from Maitland has just announced that he’s about to step into the unknown world of rallying – including the notorious Dakar rally – with KTM. MotoOnline.com.au caught up with Toby to get the skinny on everything that’s going down. 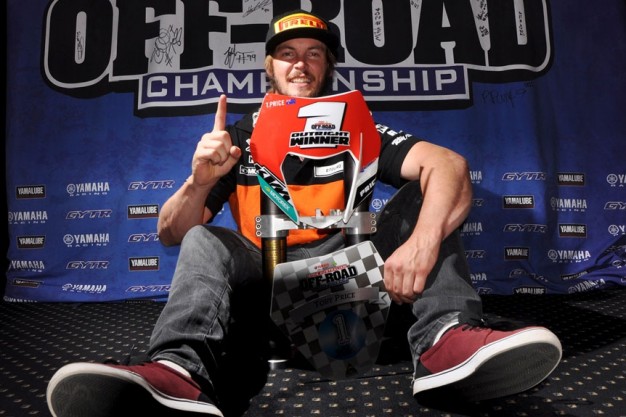 It’s been a crazy few days for you, mate. You make history in the AORC then announce you’re going to try your hand at rally racing. How did that all come about?

Yeah I’ve worked out a deal with the KTM team to race the OiLibya Rally of Morocco at the end of this month, then race the Dakar Rally in January. It’ll be a bit of a new experience for me and I’m going to have to learn how to read maps and understand French. Ben Grabham has been a huge help with everything and put the good word in for me to race rallies. I’m definitely keen and I know my speed won’t be a drama, but with rallying it’s the smartest guys, not the fastest, who are successful. I’ve got to switch my head on a bit more, but I think my desert-racing skills should transfer across to rallying pretty well.

This news is going to take a few people by surprise, but I’m guessing it didn’t transpire overnight.

I’ve been thinking about it for one or two years but I didn’t think the opportunity would arise so soon. But when an opportunity like this is offered to you you’ve got to take it with both hands. The thing is rally racing is not cheap and it’s costing KTM a lot of money to back me in this, so I’m hoping for decent results. If I go to Morocco and I don’t do well or show any promise I’m going to feel like I’m wasting the team’s time, but if I pick some things up and can see myself improving I’m going to go for it at Dakar.

So is this something you’re going to try and push into for the next chapter of your career?

If it goes well, then I would be keen to head down this path. At this stage KTM wants to get some young guys alongside Marc Coma and learn from him, and if it goes well, it might lead to more guest rides in rallies next year, then hopefully a full-time gig in 2016.

While all that’s going down, you won a record four AORC titles on the weekend. That’s a huge achievement.

Thanks. Yeah, AJ Roberts won three in a row, but I’ve got a bit of a thing going now, winning four in six years. Compared to where I was 16-17 months ago it’s a huge turnaround and it probably happened quicker than I thought it would. In fact, this achievement probably hasn’t quite sunk in yet. I thought about it today and it doesn’t seem real, especially with how many fast guys there are at the moment. With the talent coming through juniors and Under 19s I don’t think that record won’t stay for long, but hopefully I can rack up a few more titles still and make it a bit harder for them [laughs].

You won the AORC title with a round to spare and had to span a 30-second gap to Beau Ralston on Saturday to bag the win. What was going through your head when you were chasing him?

I got a really bad start and had to work through the pack, but once I got into second I knew that position would seal the championship for me. But I guess my natural instinct is to always win races and I found myself putting my head down and charging. At about the halfway mark we had a great pit-stop and closed the gap on Beau, but then I clipped something in a dusty section and went down. I had to catch up again, then Beau slipped off in a turn and I managed to pass him and pull away. I had another get-off towards the end, but I managed to maintain the lead and bring it home. After winning the championship on Saturday, did you back off a bit on Sunday?

A little bit. I was stoked to have the title wrapped up, and I had all this rally stuff at the back of my mind. I didn’t want to damage that opportunity but I still put in a pretty good effort. Milner was on the gas and definitely isn’t an easy man to beat. Then I had Beau, Glenn Kearney, Chris Hollis and Lachie Stanford behind me, so I couldn’t really take it easy, but I wanted to make sure I got through OK for this next chapter.

I don’t want to be a buzz-kill or anything, but one of the only tarnishes on your 2014 season was finishing second to Milner in the Aussie Four-Day. Does that annoy you?

[Laughs] yeah, kind of! At the end of the day I would’ve loved to have won every championship, but Dan is so fast at the moment and he deserved that win. I’m stoked with what I’ve done, winning Finke, Hattah, the three-round Tri-Series and the AORC is a dream come true. Yeah the Four-Day would’ve been nice too, but it gives me something to work on next year.

Awesome. Well you’re not going to have much of an off-season by the sounds of it. Can we expect to see you at the ISDE or will your rallying commitments take precedence?

No I’m planning on doing the ISDE as well. I’ll fly to Morocco, then come back to Australia for a week, then fly to Argentina for the ISDE. Afterwards I’m heading to the US for three weeks to do some training with the guys and watch the Baja 1000, then I’ll come home, get everything in order, then fly to the Dakar for Christmas and New Years. Then I’ll be back home and on the line for the Enduro-X Championship before the AORC starts up again. I was looking forward to a bit of a break and give the extra metal in my back a rest, but these opportunities don’t come up often and I’ve got to make the most of them.

Absolutely. Well thanks for the chat and we’ll speak again soon.

No worries at all. Good to catch up!