Coolum’s closing round of the Monster Energy MX Nationals was one of the best I’ve been to, a perfect was to wrap up what has been a pivotal year in Australian motocross.

From the Racing 4 Disabled Charity Golf Day (which we were proud to support as presenting sponsors and will feature a film tomorrow!) on Thursday to press day on Friday, then the on-track action over the weekend, the whole week had a real feel-good vibe about it. Especially with the charity activities taking place.

WEM’s support of the Breast Cancer Foundation was a real success and the industry jumped on board in support, plus the ongoing increased support of injured riders is really nice to see. Credit must go to all who are involved on each level.

It was exactly what I feel the sport needed entering the supercross season, because now we’re in a position to have a solid three ASX events before steamrolling into 2015.

Off track on Sunday was awesome, with Alpinestars hosting a heap of celebrities including Casey Stoner, Mick Doohan, Troy Bayliss, Jamie Whincup, Craig Lowndes, Jason Crump and more. Plus, the guys from Shock Mansion were on hand and even posted a pretty neat gallery on their killer site. As soon as Coolum stopped, all kinds of things have been going on behind the scenes. Right now teams are settling on supercross and also looking forward toward 2015.

Just today we’ve had confirmed Jacob Wright will remain at CDR Yamaha in 2015 (we knew that was coming), Kirk Gibbs will stay put at KTM (that was pretty obvious too) albeit with a GP appearance or two, and Jay Marmont will ride for Penrite Honda in supercross (I was aware of this, but out of respect for all while he finished of the outdoors with Yamaha, hadn’t aired it).

What hasn’t been confirmed but is highly tipped is the following: Luke Styke to KTM in 2015; Kade Mosig to CDR in 2015 (unless Matt Moss moves in); Lawson Bopping to Suzuki for SX; KTM to draft in youth for SX (Brenden Harrison, maybe) if Ford Dale doesn’t return in time.

It’s also believed Adam Monea and Jake Moss will stay put at Kawasaki next year, while Billy Mackenzie has been linked to Honda, but there’s also been whispers that Ben Townley is eyeing a fulltime return in 2015. After his moto win at Coolum, if he really does plan a true comeback, he’d have to factor as a threat week in, week out. It’d also be good to see Cody Cooper back in red.

That’s it from me for now, here’s Makker with his latest from above the border…

Just like that, the 2014 Australian Motocross Championship is over and the final round at Coolum definitely didn’t disappoint. Williams Event Management along with the Suncoast Junior Motorcycle Club did an outstanding job of hosting a world-class event and the new reversed track layout was a big hit with both the riders and fans.

As you’d imagine at a final round where all championships are up for grabs, where was plenty of feeling and emotion out on the track, although one of the biggest talking points was the altercation between Penrite Oil Racing’s Josh Cachia and fellow MX2 combatant Dylan Petersen.

Details are a little sketchy about what ignited the flair-up two in practice and qualifying, but many people witnessed them exchanging some blows/shoves on the start line before the gate dropped for moto one. The incident also attracted the wrath of MA, who issued both riders with $1000 fines for the altercation.

The heated exchange did wonders for a livid Cachia, though, who tore up the field on his way to fourth place – one of his best finishes of the season – before he promptly returned to the pits, exchanged some words with team boss Yarrive Konsky, packed his gearbag, threw it over the pit fence into the carpark, then left the track.

We’re trying to track down the finer details of the situation as you read this, so stay tuned for any further developments to the story. 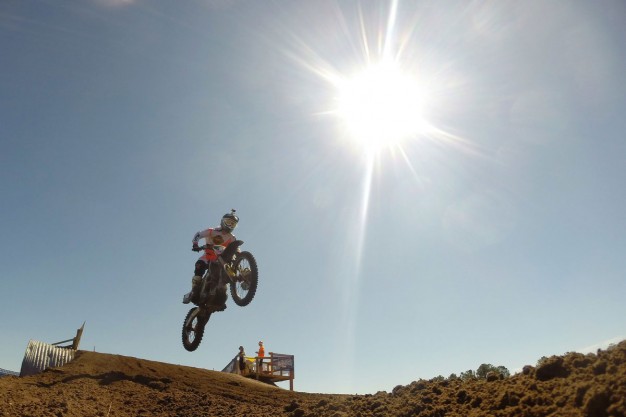 However, it wasn’t all bad news for the Honda team at Coolum. Ben Townley donned the helmet for his third outing of the season and showed us that even though he’s technically retired, he’s got pace and form to burn.

BT got the upper hand in a race-long moto with eventual champ Matt Moss in the opening 20-minute race on his way to fourth place, before shocking everyone with a convincing 6.5 second win over Billy Mackenzie in the second moto.

A 12th in the final race saw him finish off the podium on countback to new CDR recruit Jake Wright, but BT’s performance has reignited calls for him to either be slotted into the New Zealand MXoN team or to again stage a comeback to racing.

Meanwhile, the Queensland Supercross Championship confirmed their schedule for a three-round series last night. The series will start at Rob Haworth’s track at Leyburn on 25 October, followed by Robbie Marshall’s at Dundas on 22 November. The final round will be held at the Mansfield Showgrounds in South Brisbane on 6 December.

After it’s successful debut year last year, the championship has already attracted interest from a large number of pros, including the Moss brothers, Kirk Gibbs, Taylor Potter, Jackson Richardson and Brenden Harrison, and is shaping up to be a ripper of a series.