CDR Yamaha pilot Billy Mackenzie finished 2014 in the best way possible by winning the overall at a drama-filled final round of the Monster Energy MX Nationals at Coolum on Sunday. MotoOnline.com.au caught up with the likeable Scotsman after the dust had settled to find out how he’s feeling and his thoughts on the 2014 season as a whole. Billy, great win at Coolum. You must be happy to finish the season off on the best note possible?

It was an awesome weekend for me. I had a lot of local support from the friends I’ve made since moving to Australia and Coolum always has such a good vibe. Everyone enjoys watching the championships being decided at the final round.

Right from the outset you were fast and you claimed Super Pole as well as the overall. Take us through your day.

After qualifying on Saturday I was confident that I could take pole position just from how I was feeling both on the track and on my bike. I put down a pretty hard lap Super Pole lap, but it felt smooth, I made sure I hit the extension jump and just locked the lap in until the end. Winning Super Pole was a nice little earner for only two minutes’ work, although I did get fined $200 for taking a piss against the big inflatable Monster can before I started! I’m sorry about that, but when you’ve gotta go, you’ve gotta go…

[Laughs] there’s never a good time. As for your motos, you were consistently up the front all day.

Yeah, moto one was a bit awkward. I started strong but midway through I realised I was making too many mistakes. The bike didn’t feel settled and I was using a lot of energy keeping it in line. I eventually pumped up and had to turn it down a little and finished third. I knew my speed was there, but we just had to tweak the bike a little. Moto two started off awesome with a near perfect holeshot. I sprinted hard for the first half of the race, but was still adjusting to the new set-up. My line choices were bad and before I knew it Ben Townley was only two seconds behind me. After he passed I realised he had much better line choices and I tidied my game up a little. Ben was on a charge and wasn’t going to give up the lead easily, so I focused on my own race and came home in second. The third moto was brutal. With the rough track I knew it was going to be 20 minutes of intense heart-rate stuff. But as soon as the gate dropped I was into race mode and I didn’t really think about it until four laps to go when I had to spot where Kirk Gibbs was. There was a big drop in prize money from first to second, so I’d told my mechanic to keep writing dollar signs on the pit board to keep me motivated until the end. It was a bittersweet ending for me, but I was completely ruined both physically and mentally by the end of that race.

What did you think of the new track and racing the circuit backwards?

I’m always a fan of Coolum and it was definitely great to see the changes they’d made to the track. The Suncoast Junior Motorcycle Club did an awesome job and it felt like a world class event. 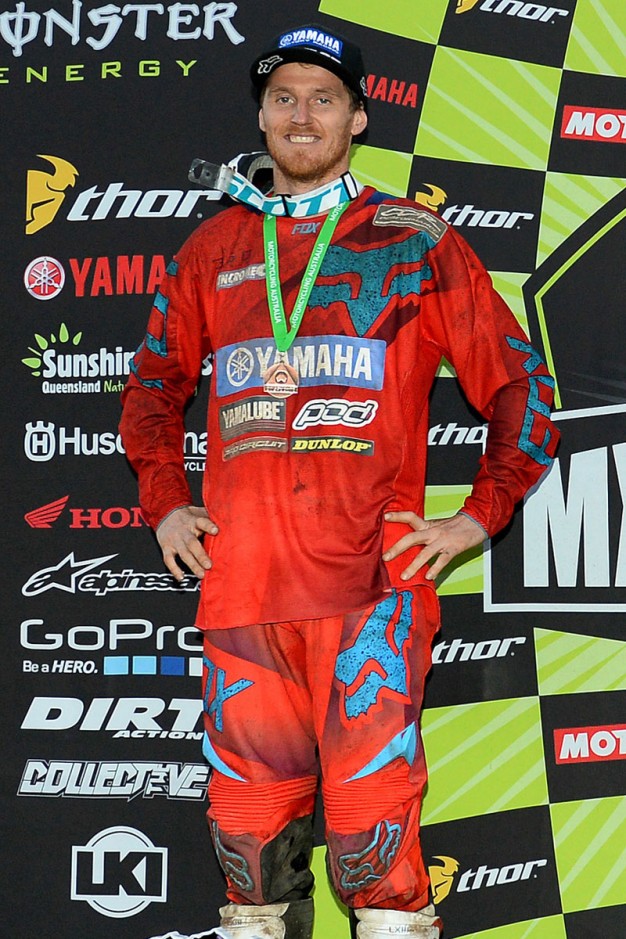 Looking back on the whole season, are you happy with how you went?

For sure I’m happy. I didn’t make many mistakes after I felt comfortable on the bike. I had a lot of podiums and more race wins than last year, and there’s nothing that I could do personally that would be different if I was to enter 2014 again. I did everything I could and I’m happy to take third overall in the championship.

This was the first season in three years that you’d made it through injury free. How are you feeling about that?

Really good, but I almost injured myself a few times in the opening races in New Zealand, at the first round at Broadford and also at Wonthaggi. I was carrying some niggling injuries and lost some confidence when we couldn’t get the bike dialled in early on, so I had to back it off and regroup before giving it another push towards the end of the season.

With CDR Yamaha not racing the upcoming supercross championship, where does that leave you? What are you plans for the rest of the year?

My contract with CDR ends this week and I’ll only be racing the motocross this year. From here on I want to relax, finish renovating my house, build my cafe racer, and enjoy the sunshine.

I’m liking the sound of that, mate! Enjoy your time off and we’ll catch up with you soon.