Steve Matthes with the latest from the US, presented by Fox Head Australia.

And that’s a wrap! The 2014 American supercross and motocross season is over. Donzo. Fini. Kenny Roczen did what he had to do at the last round and brought home a title for him and the Red Bull KTM team.

What a season for Roczen when you combine his 450MX title with his multiple wins in supercross. With defending champion Ryan Villopoto looking more and more like he’s heading to Europe for one last run, it’s not hard to think that the German might just add a supercross title to his outdoor one.

Roczen’s future is secure but let’s take a look at some of the Aussie heroes and what’s in store for them next year.

First up Chad Reed, the greatest Australian rider, isn’t going anywhere. Reed’s 2014 outdoor series wasn’t good as he came in behind the eight ball from his shoulder surgery caused by his supercross crash. He was hoping to build as he went on but then somewhere along the line he tweaked his back and it was a struggle from there.

There were some highlights here and there like in the mud of Indiana and High Point but that’s two straight years of sub-par (for him) outdoor MX performances. 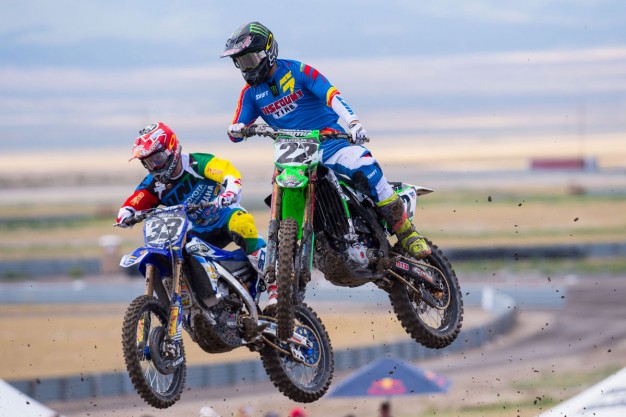 But there were those two supercross wins before he crashed out in San Diego. Those wins showed us that we can never can’t out the 22. You just can’t. He’s got more lives than a tabby cat baby.

So Reed will be back on the Kawasaki on team TwoTwo with a new teammate – Josh Grant – and he’ll be on Pirelli tires for supercross that will be a bit of an adjustment for Reed.

He tested them before going that way halfway through the outdoors but there’s no greater test for a front tire than Southern California supercross at night. Chad says they’ll be fine but let’s wait and see.

He may win again indoors, he may not but his autograph line will still be the longest one in the pits so take that you haters.

Brett Metcalfe made a return to American motocross this year after racing in Canada in 2013. He was tabbed as a fill-in for Villopoto on the Monster Kawasaki team and did what Brett does. He was a solid rider on and off the track, tried hard, worked at getting better each week and by the end of the series, there he was in fourth overall after 24 motos.

Metcalfe wasn’t on the level of a Roczen, Ryan Dungey, Trey Canard or Eli Tomac but he was the leader of that next group and sniffed the podium here and there.

If you were looking for someone to step in at the last minute and race for you like Kawasaki was, there’s no doubt Metcalfe met every expectation with the late start. 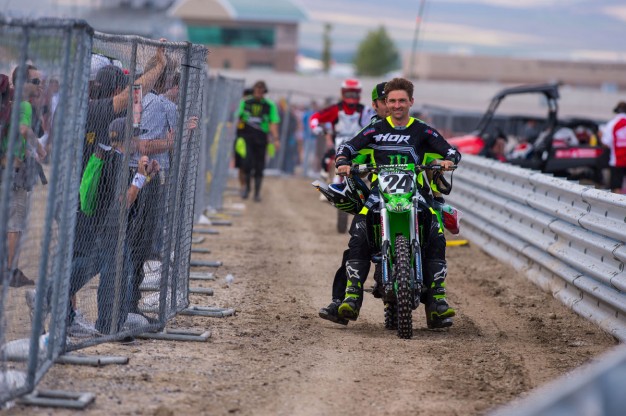 So what’s next for Brett? Well, there’s absolutely nothing brewing as far as I know in terms of coming back to race fulltime in America in 2015.

Most of the rides are filled up by now and truthfully it never seemed that Brett cared all that much about finding a ride. The word in the pits is that Metcalfe has no desire to race supercross and would be more than happy to head back to Canada for that 10-round outdoor series and try to win that again.

And hey, why not? It’s six figures for 10 races and year and no meat grinder-like existence where you have 17 races in 18 weekends. Whatever he chooses, it was nice to see Brett back down here this summer and he showed that he’s still got plenty of speed.

Michael Byrne lined back up with some help from his buddy Chad Reed for a couple of nationals and is pondering whether or not he wants to start racing again. A badly broken leg in 2012, a few surgeries to fix it and Byrner took the entire supercross season off healing.

Testing for Ohlins suspension and testing for Reed a bit, it seemed that Michael still had some of his old speed so he figured why not try and line up. He raced Unadilla and was pretty good for his first race in a long time but crashes while near the top 10 in the first moto and a mechanical in the second moto while inside the top 10 conspired to ruin his day.

In Indiana he got landed on in practice and pulled out. So it didn’t exactly work out for the number 26 but it was good to see him out there. Whether or not he races in 2015 comes down to whether he wants to go the privateer route or on a ‘C’ level team to start the rebuild again. Dean Ferris will join Matt Moss in American motocross bench racing history when the question is “Name the Australian riders who were factory riders but barely raced?”.

Ferris, coming off a great MXDN ride, was signed by Red Bull KTM for the 250SX and MX series and legitimately I thought Dean could be a top five guy here or there in motocross. He just had to get through supercross healthy.

But then he got hurt in supercross. And that sucked big-time for Ferris as he fell behind everyone when it came to testing and getting ready. But then a weird thing happened when he got healthy. KTM just told him to go race Huskys in the GPs.

Was everyone out there reading this as confused as me when we heard that news? Not sure what happened but Ferris filled in for Tyla Rattray on the Ice One Husky team to some decent results but it would’ve been nice to see what he could do racing here.

Then it was confirmed that Dean would be returning to the GPs for next year so Ferris’s year basically consisted of him getting his feet wet in five or six supercross races. Weird deal man. Anyways, the Dean Ferris era here in America is over and hope you enjoyed it.