After a day of riding a range of 2015 Husqvarna models at the Swedish world launch, it was time to hop aboard the big FC 450 MX1 contender.

Australia’s Todd Waters had already proven the FC 450 to be a top 10 MXGP machine, so I was obviously excited to see what it had to offer.

I really don’t think you can start writing about the 450cc motocross bike without focusing on the engine first. It doesn’t matter which brand of 450 four-stroke you ride, they’ll all be quite powerful – that’s a known fact. It’s how that power is being delivered and transferred to the ground that sets a certain bike apart from the rest.

The 2015 Husqvarna FC 450 features a compact SOHC engine designed to deliver exceptional power and torque over a wide rev range. The single overhead cam actuates four lightweight titanium valves weighing in at just 32 grams a piece. The lightweight rocker arms are DLC coated on the intake side of the engine.

The FC 450 features an industry-leading Pankl produced crankshaft and conrod to ensure that the high power output and torque of the 450cc engine are combined with durability and long service intervals (100 hours before changing con rod, con rod bearing and crank pin). To achieve this, the lightweight crankshaft has a pressure lubricated plain big end bearing, and two force-fitted shells that run directly on the crank pin. The Konig bridge-box-type piston weighs 330g and has a bore of 95mm, it was developed to reduce engine vibration and optimise strength. The compression ratio is 12.6:1 for an impressive peak power output of 60 horsepower.

With 60 horsepower on offer and an RPM limit of 11,500, the FC 450 engine is a monster. The great thing about the FC 450 engine package is that while it may be a monster, it’s a very tameable one. Husqvarna have created an engine with tonnes of torque, and this torque is the key to such a smooth and user-friendly ride.

Obviously you can still find yourself in a world of trouble if you don’t treat the FC 450 with the respect it demands, but if you ride the bike correctly and stay within your limits, it’s awesome. I’m more of a 250 four-stroke guy, so I was very surprised when I actually felt smoother riding the FC 450 around the rough Lulea sand track.

With such a large amount of torque on offer, you can easily ride the FC 450 one gear taller than you usually would on a smaller-bore bike.

This allows you to flow around the track and use the torque of the engine to its full advantage. Obviously with so much power and torque, we need an equally impressive chassis design to match right? Well luckily for us, Husqvarna has provided just that. 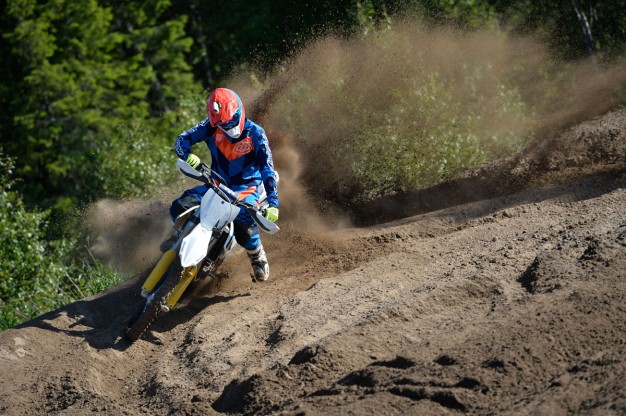 Housing the engine, is the chromium molybdenum steel frame paired with a new composite subframe design. As I have mentioned in my previous 2015 Husqvarna motocross tests, this steel frame construction is great.

The flex in the frame has been precisely engineered to provide maximum performance and rider feedback. With so much power underneath you, the steel frame gives the bike a more forgiving feel and the improved connection between itself and the ground is noticeable compared to some other manufacturers.

Obviously the 4CS (four chamber system) fork by WP is also featured on the FC 450 for 2015 along with the rest of the range.

As expected, the fork was super responsive to changes using the convenient adjusters located on top of each fork leg. The fork was consistent, offered great feedback and never missed a beat, awesome improvement over the previous unit.

Taking a firm hold of the 4CS fork are new CNC machined triple clamps designed with a precise amount of flex to compliment the new fork. Four handlebar positions are also available for a range of customization to suit riders of all sizes and riding styles.

Engineers built to swingarm with a perfect amount of flex to match the steel frame construction. This combination, paired with an updated linkage system and shock, create a stable ride and plenty of traction. 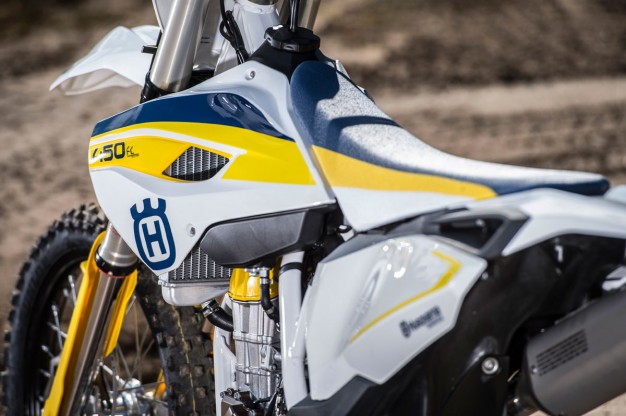 As with each and every MY15 Husqvarna model, the FC 450 excels in rough and fast sections. This chassis design provides so much confidence out on the track, it’s by far the major highlight of the bike.

In the looks department the MY15 FC 450 looks great. Black DID rims laced to machined hubs give it that factory look, and the updated graphics and seat cover combination top it all off – the bike has the looks to match its performance.

If you’re in the market for a 2015 450cc four-stroke, the Husqvarna FC 450 should definitely be on your list of bikes to check out.

Electric start, awesome engine package, amazing chassis design and great looks – you can’t go wrong with that for a recommended retail price of $11,495.

Click here for a complete overview of the each and every model in the 2015 Husqvarna motocross range direct from the world media launch held in Lulea, Sweden.