WA’s Josh Sheehan broke new ground for Australia over the weekend by becoming the country’s first-ever Red Bull X-Fighters World Champion. In an eventful series finale at Pretoria, South Africa, the down-to-earth 28-year-old claimed his second event win in a row and capitalised on an uncharacteristic mistake by his closest rival, Levi Sherwood on his way to the championship win. MotoOnline.com.au caught up with Sheeny as he already started packing his bags for a trip to France this weekend to find out what went down. Sheeny, epic win on the weekend, mate. How does it feel to be the first Australian to win a Red Bull X-Fighters title?

To win the event is awesome, but to win the championship is surreal and it’s taken a bit to sink in. When you win a round you battle people and it’s all announced straight away. When Levi crashed out of qualifying it basically handed me the title, but it was weird. I went to South Africa expecting that I’d have to go head-to-head against him to win the championship, but it didn’t quite pan out the way I was hoping… apart from actually winning the championship. But yeah, to be the first Australian to win is awesome.

It’s weird because you hadn’t won an event since Sydney 2012, then all of a sudden you won two rounds in a row at Munich and Pretoria. What’s changed?

I think last year I put a lot of pressure on myself to Double Flip and everyone expected it of me. Last year I also had a lot of stupid crashes and lacked preparation for each round with a busy schedule then bad weather every time I got home. It all kind of rolled me. This year I was doing more riding than ever and I entered Mexico with a lot less stress. I didn’t have any new tricks and there was no Double Flip ramp there, so I went there with the goal of riding smoothly and making no mistakes. It worked for me and I slowly worked at upping the stress levels at each round. I was kind of an underdog all season and didn’t feel as much pressure.

That’s an interesting point. With Levi winning at Mexico he was in the box seat right from the get-go, while you could be a bit more of a ninja about it.

[Laughs] yeah I played catch-up for a lot of the championship, but I’d prefer that. If I started on top I would’ve felt more pressure to maintain it. Coming from behind, I could be under the radar a bit and could set myself up nicely for the rest of the series.

Coming into Pretoria there was a five-point gap between you and Levi. How were your nerves in the days beforehand?

I actually felt a lot of pressure to win at Munich, and at the time I was thinking “gee that’s going to stuff me up for South Africa”. When I got to Pretoria there was a lot of other worries such as the altitude, the different race fuel and the high-comp piston we were using. Doing the Double Flip safely was also a concern, but with that and my Flair Indy I knew I could beat Levi if I had to go against him in a head-to-head.

And then Levi crashed out in qualifying. What was your reaction when you saw Levi go down?

The first thought was that I was really gutted for him. Like everyone there, I’m good mates with him and I know what crashes feel like. I’d expected to have to battle him for the win, and for him to crash out, I felt really bad for him. In the end it did take the pressure off me for the overall as I’d won basically won the title with him crashing out, but I still really wanted to win the comp.

Were you tempted at all to just cruise instead of risking it all?

Not at all. I wanted to take the event win as well. I didn’t plan on Double Flipping until the final and pulling the Flair Indy until the semis, but as I went out against Michael Melero in the first round the announcer was yelling at the crowd and asking if they wanted to see a Double Flip. They were all roaring and it pissed me off a bit. I then stuffed up a jump and I was like “well I’m gonna have to Double Flip now, just to win this heat!” 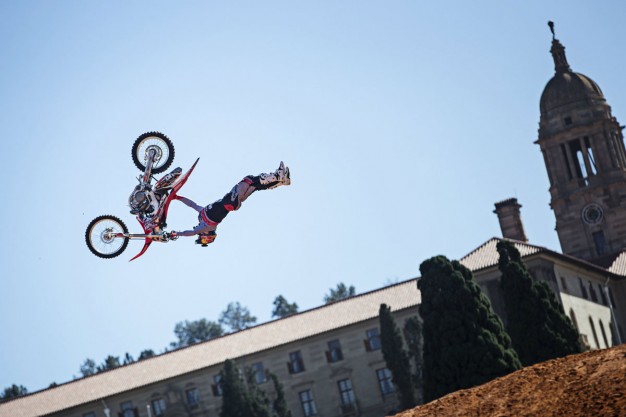 So why did you try and go all-out to win the event?

A win is way better than second! I would’ve been so, so gutted if I hadn’t gone for the win. I hate the idea of going home wondering how I would’ve done if I’d put in 100 percent effort instead of just cruising. It’s not in me to settle and cruise when I have a chance to go for the win.

There must be a fairly good pay-day attached to winning the Red Bull X-Fighters.

Yeah it’s good, but it’s not as much as what people think. It does set me up better for next year and it’s exciting to see what will happen from here on. Ever since I was a little kid I’ve dreamt of being a world champion and now I want to keep going. I haven’t got an X Games gold medal yet, so I’ll aim for that next year, as well as the 2015 X-Fighters championship.

How was it sitting next to Levi on the flight home? Was it awkward at all?

[Laughs] yeah we had a lot of laughs about that. I was helping him with his bags at check-in and requested an upgrade. They got me an upgrade and it didn’t cost too much so I took it, and by chance I ended up sitting next to Levi. By that stage we were tired and chatted more about other stuff, but it was pretty classic how it worked out.

So with the series all wrapped up, are you taking it easy now?

Well, yeah… kinda. I’m only home tonight and then I’m back off to France for the Finist Air Show this weekend. I’ve got a few fun shows lined up in Europe, but over the summer I’m going to do a lot less, for sure. I want to catch up on all the months I’ve had away and the lack of summer I had. I want to enjoy some good times with mates and a Christmas at home, because next year is looking to be massive for the Nitro Circus Live tours. 2015 is going to be a big year!

Sounds like it! Enjoy sleeping in your own bed tonight, and I’ll catch up with you again soon.

Thanks mate. Appreciate it!