KTM Motocross Racing Team pilot Kirk Gibbs again displayed the consistency he’s become known for at round nine of the MX Nationals, with his 2-3 result landing him the Gladstone round win. MotoOnline.com.au spoke to Gibbsy straight after the race to hear his thoughts on the Jono Porter Memorial event and the title chase between he and defending champ Matt Moss. 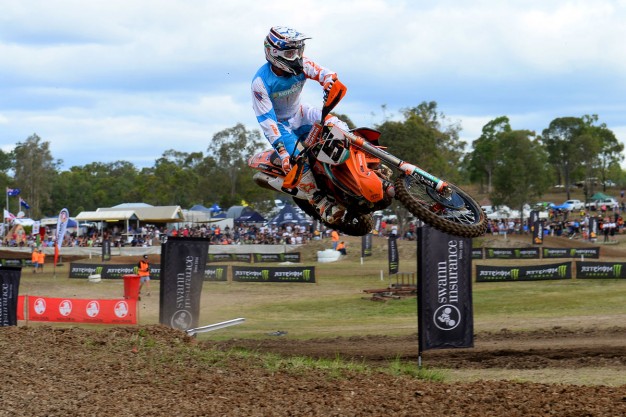 Great work grabbing your third round win of the year, mate. No-one can blame you for not giving everything to close the points gap to Mossy.

Thanks, mate. Yeah it was a big difference to Raymond Terrace. Leading up to that round I’d been sick and nothing worked for us on the day. This weekend I woke up and felt good and just had a good feeling about it all. Everything went well in practice, but I tipped over in Super Pole, which was a bit stupid. I cruised around after that, then looked over to see Matt was cruising too, as he’d also made a mistake. I think we both saw each other at the same time and both pinned it to the end, but he ended up just beating me. I was disappointed with that, as I should’ve picked myself up and got straight back on it.

Your starts were a big improvement this week too.

Yeah I’d worked heaps on starts this week and I got two rippers in both motos. I ran a bit wide both times which probably cost me both holeshots, but I was definitely happy with them. In the first race I was chasing Jake [Wright] but I pumped up and I struggled to get through the lappers, which allowed Jake to get away. Then in the second race Billy [Mackenzie] got away at the start and I thought I could push, but about 10 minutes in I tipped over and let Adam Monea past. I put a hard charge on at the end and nearly caught him at the checkers, but he just beat me.

That last race it seemed like there was a piece of elastic between you, Mackenzie, Monea and Matt Moss, with the gaps between you always shrinking then extending again. How hard was it to turn consistent laps out there?

It was crazy. The track was so technical and the ruts were so deep and long that it was easy to make mistakes and lose all the ground you’d gained. It was one of those tracks that required a lot of patience and it showed who the technically great riders really are. I was happy to come away with the win there, for sure.

Had you ridden at Gladstone before?

Nah, it was my first time and it was a great day. The weather turned it on and it was great to see such a big crowd at the races. The track was prepped really well too. It was muddy and loose in practice, but you need to do that in order to have a good track at the end of the day. The track itself though was more of a tight junior track than a national track, though. On a 450 it didn’t flow apart from a section out the back. Some of the jumps had big up ramps on 3-4 metre long tabletops, which is pretty crazy to hit at our level. The AMA and European guys are hitting jumps fourth or fifth wide and we have to brake three metres before an up ramp because the jumps are that small. Just to win. That’s all I can do. 37 points is a lot and even if he DNFs a race he’ll still have the points lead. He’s a champion and he knows what he has to do, so it’s up to me to make as many points up as I can. I’m not wishing anything bad on him, but it’s an unpredictable sport and if something is to happen to him at Coolum I want to be able to capitalise. Whatever happens happens; I’m happy with the way I’m riding this year, I’m still learning, and I’m going to take everything into next year.

So I guess you’re in a position where you have nothing to lose and everything to gain.

Exactly. After Raymond Terrace I sat back and looked at it. It wasn’t the worst day in the world but it was the worst round of the year for me. But now there’s nothing to lose and I feel I can probably push a bit harder now as a result. Where I’d usually ride at 95 percent I can now push 100 percent and keep the pressure on. The couple of crashes I had at Gladstone happened from pushing that little bit harder than normal, but I’m not afraid to risk hitting the dirt with minor mistakes if it means I’m trying 100 percent.

Awesome. Thanks for the chat mate. All the best for the final round this weekend.

Thanks mate. See you there.