CDR Yamaha’s Daniel Milner became one of an elite handful of riders by claiming his third Australian Four-Day Enduro overall in a row at Dungog, NSW, on the weekend. MotoOnline.com.au caught up with the 23-year-old from Lang Lang while he was out for a cycle to find out how he’s feeling and how he managed to keep a star-studded field of riders behind him. Congratulations on claiming your third straight A4DE win mate. You must be pumped on that result.

I’m really stoked. No-one has won three in a row for a fair while now. It was a big relief to cross the finish line in that final moto and keep my win streak alive. To tell the truth my nerves were probably on par with winning my first Four-Day at Warragul in 2012. I wanted to win it so bad; I couldn’t let Pricey win everything this year!

How was this year’s event as a whole compared to last year?

It was really well run and organised. The parc ferme, pits and our accommodation was all at a resort, so we could roll out of bed and walk down to the truck. That was one of the best points, for sure. The tracks were unreal too, although there were a few that had boulders everywhere and that made it interesting. One of the best tests in my opinion was through a riverbed loaded with round rocks. Once they got water on them they turned to ice. It was one of the most-fun tests, but it was definitely techo.

You were up against some stiff competition this year and having Josh Strang and Mike Brown in the paddock would’ve escalated that level even higher. What was your game plan heading into this year’s A4DE?

I didn’t have much of one to be honest. I wanted to try and ride like I normally do and see what happened. With Strang, Browny, and Pricey back this year, it was a very good field and I wanted to get out front early and set a good pace. My teammate Chris Hollis showed us how it was done on the first day, which was cool to see. He was on a WR450F this year and while he struggled a bit in the rougher stuff, we couldn’t touch him on the grasstrack tests. 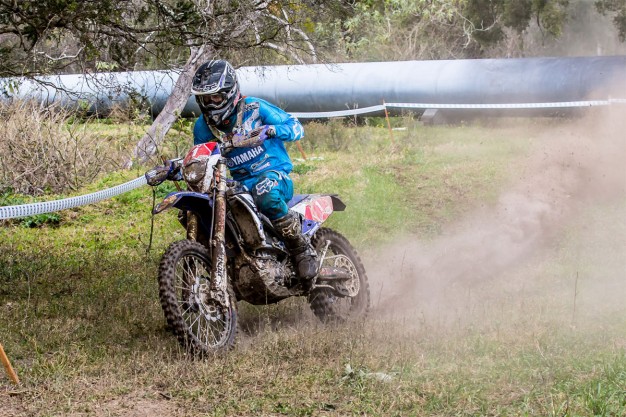 So how did it all shake out for you over the four days?

On the first day I finished second and was about five or six seconds behind Hollis. Going into day two, I knew the terrain would suit me better and the ruts and bulldust were exactly like what I rode at the ISDE last year. I had confidence in that and knew I could do well. It all worked out too, and I snatched the lead and Pricey jumped into second. Day three wasn’t my best day, but I was lucky that everyone else made mistakes too. The tracks got worse and deteriorated a lot. The clubby guys would get stuck in spots and would spin their rear wheels in the hilly powder ruts, exposing roots, ledges and rocks. You’d come around a corner and there’d be a ledge in the rut that would kick you around. It was a hard day on the body, that’s for sure. Going into the day four moto I had a 30-second lead on Toby, so I thought I’d go out and tag onto the back of him for the race. Beau Ralston got the holeshot, Toby was second and I was in third, and I managed to get it done from there.

The CDR Yamaha team has really made some waves since they entered the sport almost two years ago. What’s it like riding for Craig Dack?

It’s unreal. We’re mates away from the track as well, and it’s definitely sick working with him and being able to tap into his experience and what he’s done during his career. The whole team has a great vibe and it’s always good fun going to the races and hanging out with Dacka, Gary Benn, Brad McAlpine and my mechanic Aidan.

I guess now your focus turns to the final two rounds of the AORC in Heathcote, VIC. What are you going to work on between now and September 6-7?

It’s only three weeks away, so I want to keep it steady. I don’t want to do anything stupid like I did earlier this year when I cased a jump at home and broke my talus bone in my ankle. I had eight weeks off the bike then and I missed two rounds, so that’s made it hard for me this year. I’m currently fourth in the championship, but it’ll be tough to get into the top two unless something crazy happens. I’m really looking forward to Heathcote, though. We raced a state round there last year so I’m familiar with the soil and layout. It should be awesome on the YZ450.

Excellent. Thanks for that man. All the best for the rest of the season.