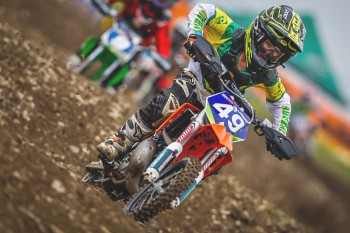 Australia has another FIM Junior Motocross World Champion after KTM’s Jett Lawrence won the 65cc division at Lierneux in Belgium.

Pinned against each other, as well as the unappealing elements of wind and rain, 289 of the world’s fastest junior motocross riders were put to the test in Lierneux as they each vied for the best spot they could achieve in the most prestigious youth motocross event of the year.

On a circuit that demanded the utmost amount of respect with its marbled clay surface, which was only made trickier with multiple down pours of rain, three riders managed to rise above.

Jetting away with his first ever world title, Australia’s Jett Lawrence rode phenomenal in the first race passing the likes of American’s Jeremy Ryan and Jett Reynolds for the win.

In race two, he got off to a fifth place start but was quick to let rip and move forward into second which was enough to crown him 2014 FIM Junior Motocross 65cc World Champion.

Japan’s young star on the rise Jo Shimoda ran away in race two for a very convincing moto win, which in combination with his fourth in race one landed him on the second step of the podium, ahead of Ryan.

Meanwhile, Australia’s race one dominator and 2012 65cc champion Caleb Grothues was obviously disappointed after trying to put an aggressive pass on a rider in front of him in race two to have it backfire. The youngster hit the deck and got trapped under his bike, which in turn cost him the title. Nevertheless, he claimed second overall.

Despite the rough start to the day, Danish Mikkel Haarup couldn’t have asked for more in race two than what he achieved, dominating the race from start to finish to win by more than 17 seconds on the newly crowned champion Savaste. With such a big effort in race two, the Dane amazingly landed on the third step of the podium despite his 13th place in race one.

Of the remaining Australians, Mitchell Evans was 32nd and Hunter Lawrence – older brother of Jett – was forced out with injuries.

Rockstar Energy Suzuki Europe’s Brian Hsu just put the cherry on top of his 2014 motocross campaign cake, which was iced last weekend when he claimed the European EMX125 title in Lommel, with his flawless performance here in Lierneux.

The young German was in a league of his own today, clearly gelling with the gnarly square edged circuit as he blitzed away from the field in both motos to convincingly be crowned 2014 FIM Junior Motocross 125cc World Champion.

While those in Europe have labeled him ‘the underdog’, upon a bit of research it has been learnt that Venezuelan Lorenzo Locurcio is a pretty familiar name in the United States after moving there back in 2008. Turns out the L30 Yamaha Team rider has been making waves across the Atlantic and did a pretty solid job at turning heads today with his 3–2 for second overall.

The old saying goes ‘sometimes you have to go slow to go fast’ which is a sentence that springs to mind after watching Mafi Yamaha MX Team’s Alvin Östlund make a silly error in the second race to throw away what otherwise would have been a comfortable second overall.

After bringing home a solid second in race one, it was evident the Swede was the second fastest in the class when he pulled the same gap in race two, but unfortunately the youngster, who is currently the European EMX125 vice champion, let the silver slide right through his fingers when he made a mistake out the back of the track and could only redeem himself for third.

Team USA was crowned as the winning Junior Nation, with Team Germany second and Team France third, while Australia was fifth directly behind Sweden.