Team Motul Suzuki’s Matt Moss enjoyed a pivotal round in his defence of the Monster Energy MX Nationals title at Raymond Terrace, claiming the overall victory and extending his lead over Kirk Gibbs to 40 points in the process. Armed with the all-new production version of Showa’s SFF-AIR TAC fork, Moss was near untouchable on Sunday at the team’s home circuit on the schedule. MotoOnline.com.au spoke to Moss on Sunday afternoon about the new fork and his success. 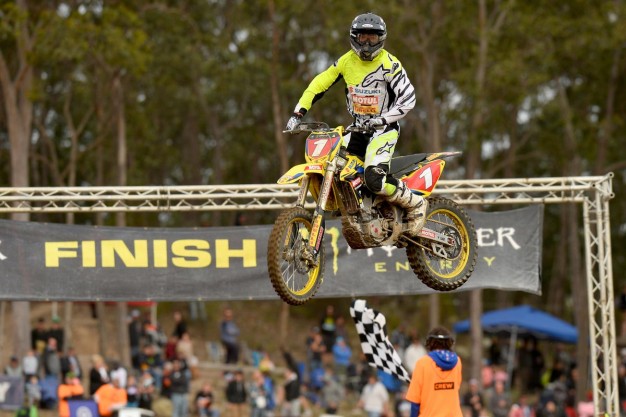 It’s a really good day for you to win, positive for the championship as well, so you must be stoked with today?

Yeah, really happy. We have been struggling all year with fork set up, I’d sort of been complaining a little bit and really wasn’t happy. Now we have the 2015 forks – the triple air forks – and I’m just loving it! The bike feels so much better. It really makes it easier to get out there and feel really comfortable and confident that you can go fast. In saying that, the bike is good, but I have to come here to race and I felt that I did that today. In the last one I got a real bad start and I came through the pack, so I’m happy with that. I’m happy just to go racing and make a lot of points on Kirk [Gibbs].

The air forks have been out for a little while on different brand bikes, but for Suzuki now you have the brand new Showa SFF-AIR TAC forks. It looks like that adds a lot of confidence to your program.

Definitely. A lot of people have the air forks, but they don’t have the triple chamber air forks, so I’ve heard mixed things about the single chamber but this triple chamber for me is night and day better. So I’m happy about that and Jay [Foreman] said the bike looks better. You know it’s just the whole thing, you get confident then you can start pushing and going fast. If you’re not happy you start going backwards and start making up excuses. There are no excuses now, we will keep pushing forward.

The 2015 Suzuki will have these forks and from what I understand, you guys have been waiting for these to arrive for a while haven’t you?

Yeah, it’s been about three weeks now since we ordered them. We were hoping we would get them for the last round but they didn’t turn up. So I’m stoked to have them now and they came right at the right time. The pressures were getting pretty heavy on my shoulders, so we got them and they come through! Today’s racing, you came out strong winning those first two motos and got the overall done in the end. You looked like you were in control all day today; was that the case?

Definitely, today is the first time I felt like I did back at Appin. I felt like I was there to race. The other races I have just been trying to maintain or was just happy with getting seconds or thirds and stuff like that. Today I came here with the mentality that I was going to win. People started saying that Gibbsy is going to beat me… if anyone wants to be competitive against me they should try and be as quiet as they can. If they rattle my feathers I’m going to fight back – I’ve always done it! Maybe they should stop pushing me and talking it up and keep quiet. I’m happy with today.

The championship now sees you with a 40-point lead, so that’s really, really handy going into the final two rounds.

It is. I have never raced at Gladstone, but we have three weeks to develop these forks even better, so we should come out better and stronger at the next round. And Coolum, I love Coolum. I know I can go fast in the sand because I love the sand. We will just keep going the way we are going. It’s make or break now and I’m delivering now, so let’s keep going.