SD3 Husqvarna’s Luke Arbon continued his impressive, resurgent 2014 season with a strong first overall at round eight of the Monster Energy MX Nationals at Raymond Terrace on the weekend. MotoOnline.com.au caught up with Arbon as he prepared for the long drive home from Sydney to Gawler, SA, to get his take on an eventful day of racing. Great to see you claim the win after a crazy day of racing, Luke. How does it feel to get on top of the box again this season?

It feels great to get the overall and prove my round win earlier in the year wasn’t a fluke. Murray Bridge was my home track, but it was a cool to turn up to a neutral round and prove I can win somewhere else as well.

The round points were really close after the final moto, with only four points between the top four riders after three races. When did you find out or know that you’d won the overall?

Yeah I only won by a point. Someone told me I’d won when I came in off the track, but I wasn’t really sure what the case was. I then asked Kevin Williams and he checked it out for me and told me the good news that I’d won. I was stoked!

Take us through the day, because it wasn’t all smooth sailing for you out there.

I struggled in qualifying as the track had copped some rain the day beforehand, meaning it was like soup on top, but hardpack underneath. In the first moto I got the holeshot and felt good for a couple of laps, but then I pumped up and hit the deck a couple of times. I ended up ninth. The second race I wanted to really turn it around. I got the holeshot again and led the whole race – it was good to not get roosted or caught up in the battles behind me. I almost holeshot the last race too, but was just beaten by Errol Willis. Clout passed me, then I passed Errol for second and we pretty much stayed like that all race. Jay Wilson caught and passed Errol for third and I could hear him behind me for a while, but then he dropped back and we all maintained the same gap until the finish. The track was hard to go fast on, and if you pushed too hard you could easily find the limit and crash. The new layout was good, but. It made the track flow a lot more I thought. 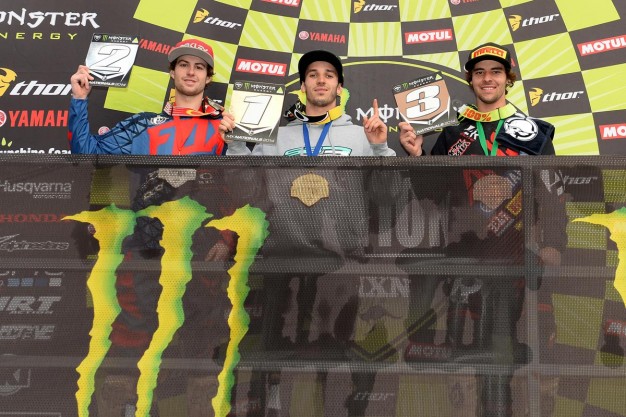 So far the MX2 class has probably been the most unpredictable class of the championship on a round-by-round basis. Why do you think so many riders are having an inconsistent season?

I think it shows just how much depth is in the class and getting good starts are so crucial to your results. At the start of the season there were probably 10 guys with the same speed, and while there’ve been a lot of injuries lately, I’ve really had to work on my fitness and pace because everyone is still so close.

As for yourself, it seems your getting stronger as the season wears on and you’re now comfortably in third in the title hunt. What’s been the turnaround for you?

The turnaround for me is being able to have fun again at the races. I’ve got good people supporting and helping me, and there’s a lot of positive energy flowing. I enjoy being at the track and that makes a big difference. I think the key moment for me was at Appin when I ended up fifth after a decent start. I knew then I could do well and win races if I put in some bike time and worked on my fitness. Then when I won at Murray Bridge it proved that I belonged up there and it gave me a lot of self-belief.

How does it feel to be ‘cheating’ on a “63 horsepower” bike?

[Laughs] it feels wicked! My bike is straight out of the box and is such a great bike, which shows just how good the bikes come stock. The Husky is hard to ride and go fast on, but when you get used to it, it’s amazing. As for all the cheater talk, who’s winning the championship? It’s within the rules to ride a two-stroke in this class and it means I can actually go racing and be competitive instead of having to spend truckloads of money to try and compete against the factory four-stroke teams.

Good stuff, bud! We’ll see you up in Gladstone in a couple weeks’ time. Safe travels.