The Point: Two-stroke vs four-stroke solutions

What should the future hold for Australia's MX2 championship?

It’s a topic that’s divided the pit paddock like none other this season. In fact, the two-stroke versus four-stroke MX2 debate is one of the most contentious, tricky issues Australian has faced in years. With MX Nationals promoters WEM set to announce the class formats and possibly a solution to the issue in the very near future, MotoOnline.com.au hit up some of the pit paddock regulars to get their opinion on how they would address the current MX2 scene. 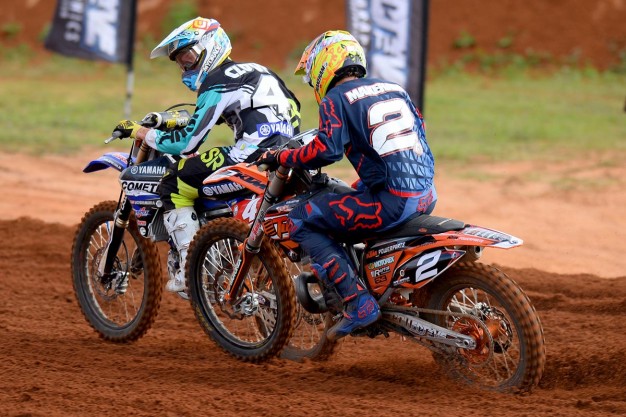 Gavin Eales – Serco Yamaha team owner:
I’ve told Kevin Williams to leave the class as it is and work with it the best we can. In our current economy we can’t afford to not have two-strokes in the MX2 class. I think the best solution is to limit the amount of modifications that can be done to the two-strokes and leave it at that. We didn’t really have this problem last year, but this year everyone’s put in a lot more work into the two-strokes to maximize their power advantage. I mean, I thought we’d get beaten at a few tracks this year, but we just can’t keep up with them at all. We have done a few dyno tests and one of the top two-stroke racer’s bikes was putting out seven horsepower more than what a privateer’s YZ250F would do. The biggest difference was in the mid-range, where the two-stroke had a 16 horsepower advantage! That explains why if a two-stroke racer makes a mistake out of a corner they don’t lose as much time as our four-strokes do. If we can control the two-strokes and cut their horsepower by say, 10 percent so they’re not so dominant, then happy days.

Kale Makeham – Tunetech Racing KTM MX2 two-stroke racer:
It’s a real grey area and no-one has a good answer for it. I think main problem is with the Lites class in general. Kawasaki has pulled out, Honda has a limited program and KTM doesn’t have an actual factory MX2 team. The MX2 four-strokes are more expensive to maintain and the teams don’t get the same amount of exposure out of it as the MX1 class, so in my mind it was only a matter of time before the two-strokes made a comeback. I don’t think there’s an easy answer for this, and you definitely can’t cut them from the class, as the MX2 four-stroke only class will be tiny. At the moment right now there are only really two guys on four-strokes out there racing, but I’m racing six-to-eight two-stroke racers out there who can win at any time. It’s not like there’s one guy out there ‘cheating’ on a two-stroke.

Jacob Wright – CDR Yamaha MX1 rider:
If it was up to me, I’d make the two-strokes a separate class. At the end of the day it’s all well and good for them to race the four-strokes, but it’s not fair and it’s not making the two-stroke racers ride any better – they’re just on faster bikes. If they want to make it overseas in Europe or the US they’ll have to ride a four-stroke. Even stepping up to the MX1 they need to learn to race four-strokes, so if they’re serious about their careers, why not just get on one and be done with it? You’re going to get noticed by teams a lot more riding a four-stroke than you are a two-stroke.

Chris Woods – Raceline Pirelli Suzuki workshop manager:
I definitely think we can’t afford to change it and we need to leave the two-strokes involved in the class. Last year we were down to less than half a gate of MX2 racers at Swan Hill, and this year it’s pretty much the busiest class and putting up some great racing. However, I think we need some regulations, as we’re not comparing apples with apples at the moment. I was talking to MA about it and the two options are to either let four-strokes go up to a 300cc capacity, or regulate two-strokes by only allowing standard pipes and reeds. Another option would be to give two-stroke racers a limit of three visual, bolt-on parts, and have a WEM scrutineer creeping through the pits at each round randomly inspecting bikes and engines. You’d be crazy to remove the two-strokes and give them their own class. Guys like Errol Willis and Luke Arbon won’t do an MX3 class – that’s not seen as a national championship and we need those guys there. I can say that this is one of the trickiest things I’ve seen come along in racing. It’s helped generate more interest in the sport, but it’s very tricky to police. 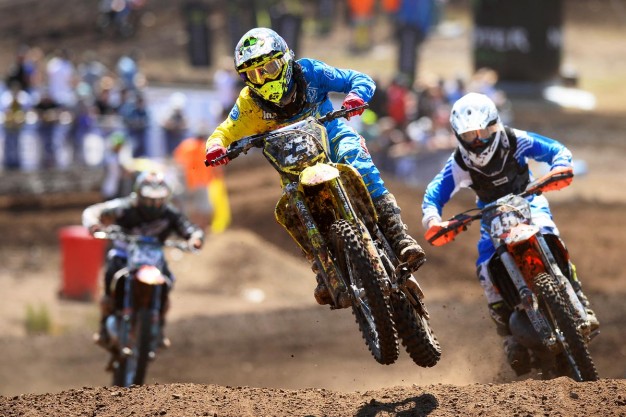 Ryan Marmont – 2006 MX2 Australian Motocross Champion:
It’s very frustrating with the two-strokes and four-strokes. It’s a huge disadvantage and you’ve got to ride the pants off the thing to even battle with two-strokes. You’re underpowered and you’ve got more weight. I really feel whichever decision they make will get people off side, because at the moment the two-stroke guys are happy and the four-stroke guys aren’t. Next year it could potentially be the opposite. You have to look at what’s best for the sport though and I think the way it is right now isn’t the best for the industry. Hopefully they can address it the right way and hopefully bring the numbers back on the four-stroke side as well. We need not to be stubborn, look at what the rest of the world is doing and do what they do. It’s a great sport to be involved in, so with a few little things fixed I think it can boom again.

Jay Wilson – Serco Yamaha MX2 four-stroke racer:
I think there needs to be a MX1, MX2 and a two-stroke class. The privateers who want to race can still afford do in their own class against bikes that are just as competitive, while those who are serious about their careers and wanting to make it can line up in the four-stroke MX2 class. No other country in the world except New Zealand allows two-stroke 250s to race in the MX2 class, so I don’t see why we should be any different.

Mike Landman – Penrite Honda Racing team manager:
In the Lites class, definitely not. Not a 250 two-stroke anyway, maybe a 150 or something like that. A stock 250 four-stroke out of the box, is anywhere from 35, 36 to 38hp and a stock 250 two-stroke is 8-10 more horses than that. It is possible to get a 250 four-stroke to about 40 or 41hp but you can increase the power in the two-stroke as well and it’s faster to begin with. They should be in separate classes. I think that’s something that could be worked out. My concerns are with running the two together – one, is the big horsepower advantage, and two, I can see that the average person who goes to buy a bike is paying similar money for something that has 10 more hp, probably less in maintenance, and I can see it killing the 250 four-stroke class because you can’t blame people. If you’re a privateer riding in that class it’s a no brainer, you will ride a 250 two-stroke. I totally disagree with it because it’s not a fair and level playing field.