Current 19 and Under AORC series leader talks 2014 to date.

MotoOnline.com.au caught up with Daniel Sanders, who is currently setting the world a light in the Yamaha Australian Off-Road Championship (AORC). On track to take out the 19 and Under championship in 2014, we sat down with the 19-year-old to fire a few questions in regards to the AORC, the upcoming A4DE and the ISDE. Daniel thanks very much for your time. Last weekend at Kyogle you had your first defeat for 2014 in round nine, but bounced back to claim the round win in round 10. But, most importantly you are now in the box seat to wrap up your first ever championship come September. How was your weekend from your point of view?

Yeah, it was very rough to start with! I wasn’t feeling 100 percent on the bike, coming from a very wet Victorian and South Australian conditions – it was hard to adapt to the very dry New South Wales conditions. The weekend was pretty tough, I just had to try and control it the best as I could and not crash and injure myself because I have the next round of the VORC this weekend, then the A4DE, then the last round of the AORC. So I didn’t want to push too hard, which might have resulted me coming off and injuring myself. I was carrying a few injuries into last weekend, so I just wanted to get through the weekend unscathed. It was a bit of a bummer with the first defeat of the year in round nine, but I just had to regroup and came out hard the next day and managed to come away with the win. I just had too many crashes on the Saturday that let me down a lot, but hey, that’s racing.

So what injuries were you carrying into last weekend?

A few weeks ago I did my medial. I either strained it or did a grade one tear.

Did that give you many dramas throughout the weekend or were you able to put the pain out of your mind and get on with the job?

Yeah, I just strapped it up and took some pain killers. As soon as I was on the bike the pain disappears really. I just couldn’t tweak it, but it was quite sore that’s all. In the same crash that I hurt my medial, I also did some damage to my back.

This year you really have been a breath of fresh air for the AORC series. From your point of view, how much has it been a shock for yourself to be doing this well? Not only in the Under 19s championship, but Outright as well…

Not really a shock. I thought if you put the hard yards in it eventually pays off. So I suppose once you come out of juniors, you have a couple of learning years in the senior ranks. You just have to learn every year. You normally don’t peak until your late 20s. It’s a smart sport, you have to know a lot of lines and the speed gradually builds up with your head as you grow up. But to walk away this year with the championship would be awesome! I have to get there first though, it’s not over yet. 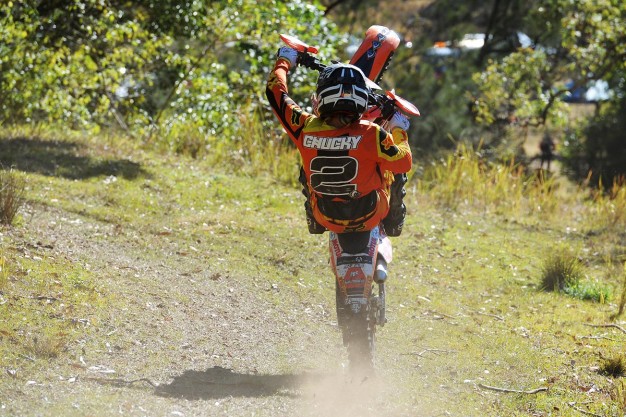 Sometimes young ‘kids’ at your age, let all the wins and so on get to their head a bit. But you have managed to keep your feet planted on the ground and you don’t seem to let anything get to you. How do you manage that?

Well losing my first race on the weekend sort of woke me up a bit. I have had a few easy wins over the last few rounds, but Broc [Grabham] really stepped it up on the weekend and put some good times down and managed to pip me. He has shown he has some good speed too, which will keep me on my feet. So when you finish second, it’s a big difference to winning. There are always happy days when you are winning, then when you lose it’s a wake up call. So you really need to pull your finger out.

What did you actually do wrong I guess for you not to have won last Saturday? Can you pinpoint where you went wrong?

I boiled my brakes in the first test and ran off the track, then I crashed three times on the TTR track. That bit me in the arse pretty bad. It was only a four-minute test and I crashed and lost 15 seconds in one heat. If I took that time away I would have ended up around fourth Outright in that test. So the speed is there, it’s all in the head, and I just have to concentrate. You can’t take your mind off it for one second.

Now in a few weeks time we’ll be at the A4DE up in Dungog. What’s your realistic goal up there? Do you think you could out with a top five overall?

Top five, I don’t know. After last weekend’s effort, I’m not too sure. If it’s wet and sloppy I’ll be laughing! I love the wet. A top five I would be over the moon with that, but first I will try and get a podium in the E3 class, then work within the top 10. We’ll see how we go. As long as I get no bad luck like last year I’ll be right.

Well, thanks heaps for your time this afternoon. All the best of luck at the A4DE and of course for the last two rounds of the AORC at Heathcote.

No worries, thank you!